Yesterday night I ended up really appreciating the hotel at which I am staying. I had been a bit annoyed about some static noise and some door shaking a bit, but I found out that this was NOTHING. In the evening, I went out with some guys to get some dinner, and afterwards we went to one of the bars in Jomfru Ane Gade (Aalborg), which is a street known for its many bars/discos. Me and this other guy both stay at a hotel which is located around 15 mins walk away from the central Aalborg, but these other two guys chose a hotel down-town. They had looked a bit into the hotels, and chosen one which was IN the center. Actually, it was located IN Jomfru Ane Gade just above the one disco in the street (they must have missed this fact). Because of this, they had barely gotten any sleep the day before because a bunch of young people had been partying until 5AM. Apparently, the music was just as loud in the hotel rooms as in the disco, and they could tell us which music they had been playing all night. As this was a Monday, they calmed themselves by thinking “Don’t worry, it was just yesterday. It must have been some people celebrating something today”.

So we were out, just getting a few beers before we would go back and sleep in order to be rested for the next morning lecture. We had a great time joking around, playing table football, when all of a sudden, young people wearing costumes started streaming towards that disco below their hotel. 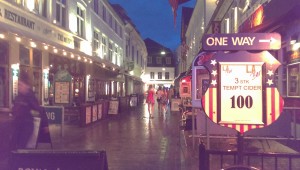 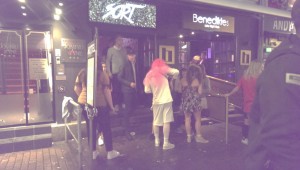 Those two guys face expressions were priceless – “No, you’re kidding me”. Apparently, it was the same people from the day before, and it turns out, the local high school had just had their final day, which means that this week is party-all-night-in-costumes-week. 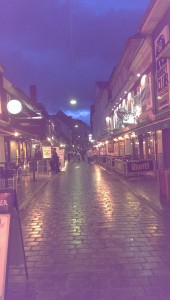 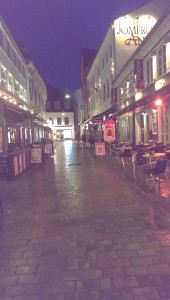 For the poor guys who chose a hotel in Jomfru Ane Gade, this meant almost no sleep before 3 hours of lectures followed by several hours of exercises. They just wanted a hotel which was down-town, but they didn’t know that Jomfru Ane Gade was the party street. The face of them realizing that this would be all week, was really pitiful – I felt really sorry for them. If this had been a party-trip, then it would be different, but we actually have a fracture mechanics course (not the best subject to be dead-tired for) starting at 9AM in the morning.

Well, at least I had a good time, and slept well – and I was glad, because we had 4 hours of very complex theory the next day. However, the teacher did an excellent job explaining – it was awesome! The course started out in a very high quality, but I feel like the quality just keeps increasing for each day. I wonder if it is possible keep up this tendency until Friday ^^