I have returned from my visit to Aalborg! The teachers had encouraged us to go out Thursday night and visit “Gaden” (means “the street” and is a nickname for Jomfru And Gade, the party street). So what could we do? When the teacher encuraged it, we had to go out and drink beers, right? 😀
Oh well… We had an awesome time, starting out by dinner at Søgaards Bryghus where they only have beers they brewed themselves. Considering this (and comparing to beer prices in Copenhagen), the beers were actually quite cheap. The food was really good, and we ended up being around 15 people from class going together – it was really nice. Afterwards we went to “Gaden” to some German themed bar where the bartenders were dressed “October fest” style. But the bar played all the good old Danish classics, setting the mood high (mine at least). 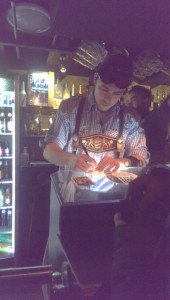 We played this game where you have to knock in nails with a hammer taking turns, and then the first one to finish, wins. Even though I think it went pretty well in the beginning, I ended up second to last.. But well, at least I wasn’t dead last! 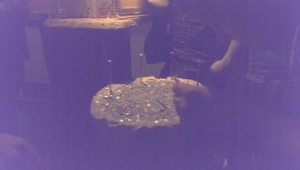 All of a sudden, shots started appearing, and it got a bit late. 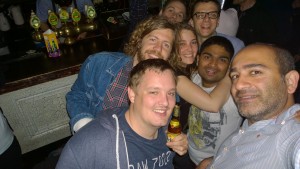 I was back at the hotel at 4am in the morning and in principle classes started at 9am. But the teacher had put group work in the morning and therefore the lecture didn’t start until 11am – that’s good planning. Even though the lecture started later, I woke up at 7 and felt horrible, so in the end I only got 3 hours of sleep. It was very difficult staying awake during the lessons, but I managed (and I do still remember most of the lecture). But the teacher quoted one of the students “Study hard, party harder”, so I guess it was okay. ^^
I had booked a ticket for a train leaving from Aalborg at 6pm, but I arrived at the station at 3:55, and went to ask if I could take an earlier train. I was told that if I took my luggage and ran as fast as I could, I could get on the 4pm train to Copenhagen, however with no reserved seat. So I did, and only barely managed to get on the train, with the doors closing right behind me. I had to move seats twice, and stand up for 30 mins, tired and hung over, but I was home at around 9:30pm instead of the planned time of around 11:30pm, so I won’t complain.
And that was the end of my first trip to Aalborg where I, even though I had to work, had a great time! I did find out that the rest of the guys coming from Copenhagen had flown instead of taken the train, though. I will do this when I am going back for another course in the beginning of June.