Everything has been a bit hectic recently, so I haven’t been writing as much as I intended on my blog. I actually started writing something several times, but I left it unfinished. And now I even ended up re-writing it completely. For once, it has not been my work getting me stressed out, but everything else happening. My car has been acting up – even though it had a very expensive fix recently – and in addition, my grandfather died the weekend before last, and we had the funeral last weekend. Therefore, I decided to write something about the funeral – which might be why it took me so long to finish writing anything this time. I also did write something about all the trouble my car has given me (I think I have some kind of anti-car aura), but I decided to scrap that for now. ^^

So, last weekend I went to my grandfather’s funeral, and even though it was very sad, it was a beautiful funeral. I don’t believe in god or the church, but my grandfather did, and I know he would have been very happy about the ceremony he got. The priest held a very nice speech about his life, which had many ups and downs, and many achievements. The chosen songs (“verses” I guess they are called?) were some of my grandfather’s favourites, and particularly the last one hit spot on (Du, som har tændt millioner af stjerner). We carried out his coffin while the organist was playing a piece by Mozart, which my grandfather had loved, and when we got out it was sunny, even though it had been raining during the ceremony.

After the ceremony, we served “smørrebrød” and Danish (wienerbrød) along with coffee and beer (gravøl). Despite everything, I laughed a bit at the alternative door stop someone thought up (engineered). 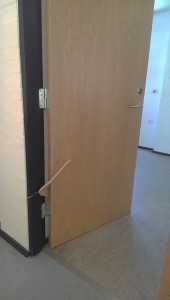 There were around 50 people who showed up for the funeral – I think that is pretty amazing for a man who died at the age of 90. My grandmother had prepared a short speech, but since she has problems speaking loudly, my brother read it aloud in her place. He had needed to practice a bit beforehand, since there were some German words in it. Just as my eyes had dried, they teared up again. ^^ I find it really amazing that two people can be married for more than 60 years – that truly is loving each other through sickness and health. Shortly after, one of their friends throughout most of their lives held a speech. He managed to bring both laughs and tears to the crowd – he is very good at these sorts of things.

Afterwards we went to the grave where the urn had not yet been placed, but all the flowers from the coffin had been placed there. They were very beautiful.

He was a man who has affected many people’s life in some way, and was loved by many. Not only was he a very loving person, but he was also a great scientist and teacher – all though he could be very stubborn at times. 😀 He was a man I greatly respected, and loved very much, and I still tear up when I think about that I will never see him, nor receive any late night e-mails from him, ever again. But I don’t think it was unfair that he passed away, and not many can say that they achieved as much as he did with their lives. I will be forever grateful for everything he has done for me, and he will forever remain in my heart. May he rest in peace. <3