I decided a long time ago, that when I was in Japan, I’d buy a yukata (traditional Japanese clothes). And on my 7th day here in Tokyo I already got the chance to buy one – and wear it to a fireworks festival!

I had planned to go to a huge fireworks festival with a friend from Kumamoto visiting for a few days. The plan was also to buy the yukata in the afternoon just before the fireworks festival, and go there directly (changing in the bathroom or something). However I feared that, him being a guy and me also having absolutely no clue how to wear a Yukata, things would become difficult. Luckily, a girl tagged along to help me out, and I was very grateful for that. We went to a department store (Odakyu) and got help from a very enthusiastic sales woman – she was so nice! I don’t think she spoke English, though. ^^ People were staring a bit when I was trying on the yukatas. Being a foreigner trying on yukatas surely gives you a bit of attention. Not to mention that the yukata I ended up buying was very girly, but the sales woman said that it was okay to be a bit more girly than usual when it was a yukata.

I’m so glad I wasn’t alone when I was buying it, and If it hadn’t been for all their help, there is NO WAY I would have been able to wear the yukata – soooo difficult!!! Particularly the belt (obi) was difficult to tie, but the girl with me managed beautifully – with a little help from youtube. ^^

It was a very funny to experience how difficult it is to wear everything correctly – particularly if there’s no wifi connection (and I still don’t have a data sim-card yet). And it didn’t even get that expensive I think. In total I paid 20.000 yen including yukata, obi (belt), tying straps, thin under gown, geta (sandals), and a handbag. 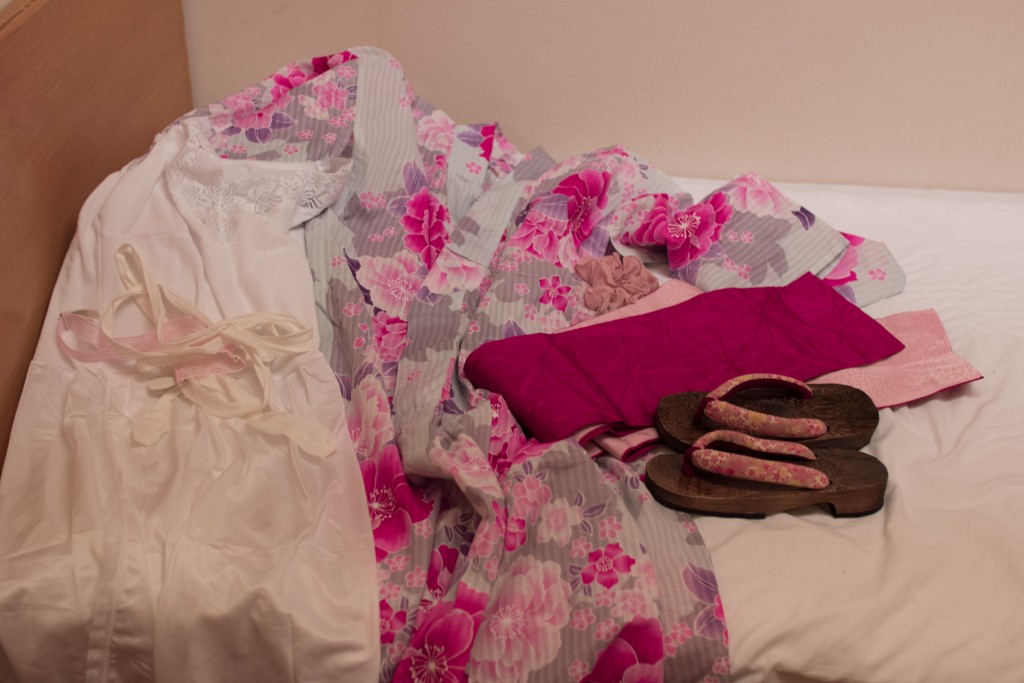 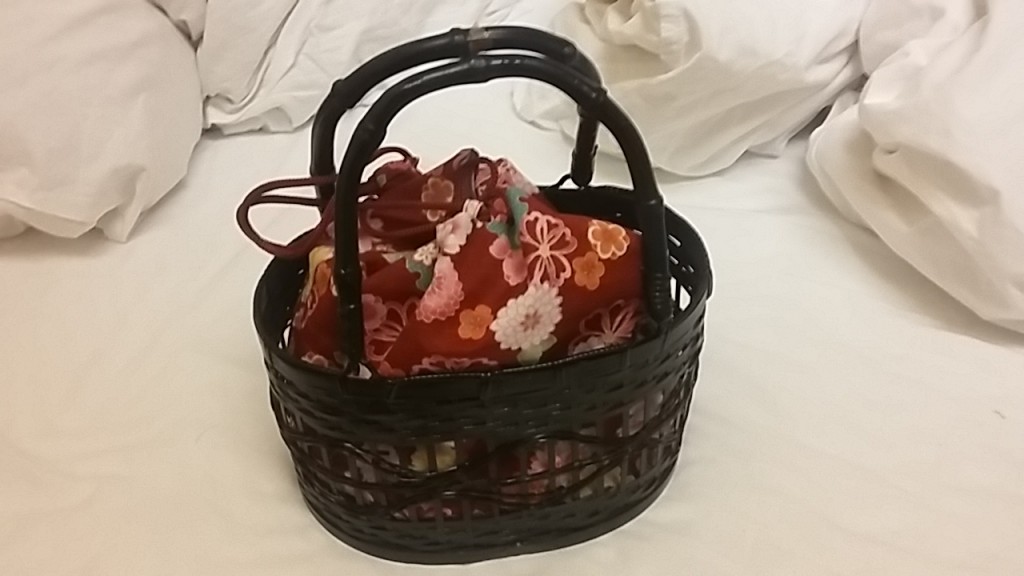 It was actually quite a lot cheaper than I had imagined, and if my stay had been anything less than 6 months, I could even have gotten it tax free as well (the consumer tax here is 8%).

After fitting the yukata on me and having the sales woman adjust it a bit, we went to a café to get a bit to eat and relax a bit after all the hard work, and around 5 PM we went to the fireworks festival. It was a huge festival with 770.000 people – and it was so crowded! After walking in the wrong direction for a while, turning back, and then walking for quite some time (I was wearing geta sandals by the way), we arrived at the place we had tickets for (I’m glad we had tickets, otherwise it would have been hell!). But here we could see the fireworks up close and sit down on a chair. It was beautiful fireworks, but I particularly liked the “fun-session” where they tried to make it look like anime-characters (not always successful I’d say though^^). Ah, and another thing I liked very much was hearing people’s reactions. “Oooooooh”, “Sugoooooi”, “Kireeeeeei”, “Suggeeeee”, “A, dekeeee”…. Haha, it was really awesome I think. 😀

It is not very easy to take pictures of fireworks!! But there were professional people taking photographs as well ^^

After the fireworks, we went to an isakaya near Takadanobaba, but it was crazy to get there! The fireworks ended a bit after 8pm, and it took almost 2 hours to get there because of the crowd (and everyone had to use the train). It would have taken maybe 20-30 minutes with no people, so in a way it is quite amazing that it didn’t take longer considering that there were a total of 770.000 people. 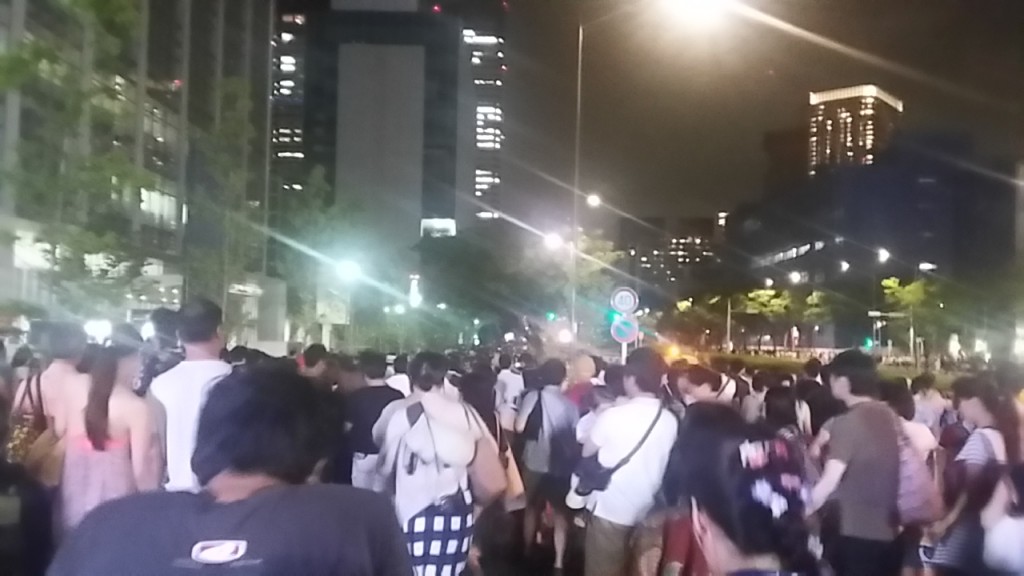 And well, when we got to the isakaya, the beer, food, and sake tasted a little bit better (and it was also really good!). I got a bit more attention than I preferred when entering the place wearing the yukata, but oh well – I won’t get many chances of wearing it again. 😀 Two girls were on their way out when we were entering the isakaya, and they stopped and said “Kawaii! Niau jyan” to me (meaning something like “Cute! It looks good on you”, but including some slang). I was happy they said something I could somewhat understand, haha. I think a foreigner wearing a yukata gets a little bit more attention.  ^^ I tried various food in the Isakaya, and I cannot remember all the names but I took some pictures.

Tired after a long day, I returned to my apartment, which was only one train stop away. When walking from Waseda station towards my apartment, I passed an elderly man and probably his daughter (or very young wife^^). The man looked at me and did a thumbs up and said “Goodo Jobbu” with very Japanese English. I found it difficult not to laugh, but managed to replace it with a smile and say “Arigatou gozaimasu”. Then they asked me where I was from, and if I was a student here, and they even complimented me on my Japanese. So far people here on the street or in stores have not spoken to me unless I asked them something. When I just got to Japan (only around a week ago), it felt a bit like people were avoiding me, afraid of having to speak English or something. However it seems that showing interest in the culture in various ways makes some of the shyness (or what it is) disappear. よかったです。(I’m glad!)

So all in all, I had an awesome day, with so many different experiences that I was completely exhausted when I got back to my apartment. 疲れましたが、楽しかったです。(It was exhausting, but fun!)