(It might take a little while to load all the image sliders in this post, I think I overdid it a little ^^)

Yesterday I experienced the heavy Japanese traffic jams, the country side, the ocean, fresh seafood, mountain climbing (using stairs), a hot footbath with ocean view, ramen payed in a vending machine, and the miracle of being able to buy laundry basket above my local supermarket at 9PM. Oh, and I also received my Japanese sim-card – so it was surely an eventful day, and I was completely exhausted when I got home.

The whole day was planned by one of my friends who I got to know when he was visiting our lab last year. He and his friend chose to take me somewhere I couldn’t easily go to myself, as I have no car nor any intention of driving here. They picked me up at Kasai station, which was a bit less central than Waseda, since they hoped they could avoid traffic. However they got an hour delayed due to traffic anyway, so I got a coffee and practised a bit with my new camera I bought on the second day here (Nikon D5500).

The first destination was in the Chiba region at a restaurant called “The fish” or Japanized “ザ・フィッシュ” (za fisshu). We got caught in a bit of traffic jam, but I was really amazed about all the features on the all-in-one monitor in the car. Not only was it a GPS and played dvd, radio, ipod, but the traffic information system was truly something. It was highly updated and accurate with traffic information, and there was a special radio channel for traffic information. At the traffic jams the information level was also very high; they’d even tell you for how many kilometres it spanned and how long time it would take to get through it. Oh, and of course this screen could also show a video from the back view of the car, for easier parking. Apparently, these things are normal here, but it’s not that common in Denmark. ^^

At “the fish” we got sashimi and tempura (I found out that I really love tempura), but the portions were huge! I could not finish mine (not even close), but all of it was very good. I did find the texture of raw squid to be a bit weird though. The sashimi was arranged so nicely in a huge shell (I really want that shell! It was so awesome).

With our stomachs filled, it was time for mountain climbing at Nokogiri Yama (鋸山). It was probably close to 35 degrees C, the humidity was very high, and the sun was out most of the time. Therefore, it was a bit rough climbing the many stairs, although it was only the top part of the mountain. Of course there were vending machines with drinks at the entrance.

The view from the top was awesome 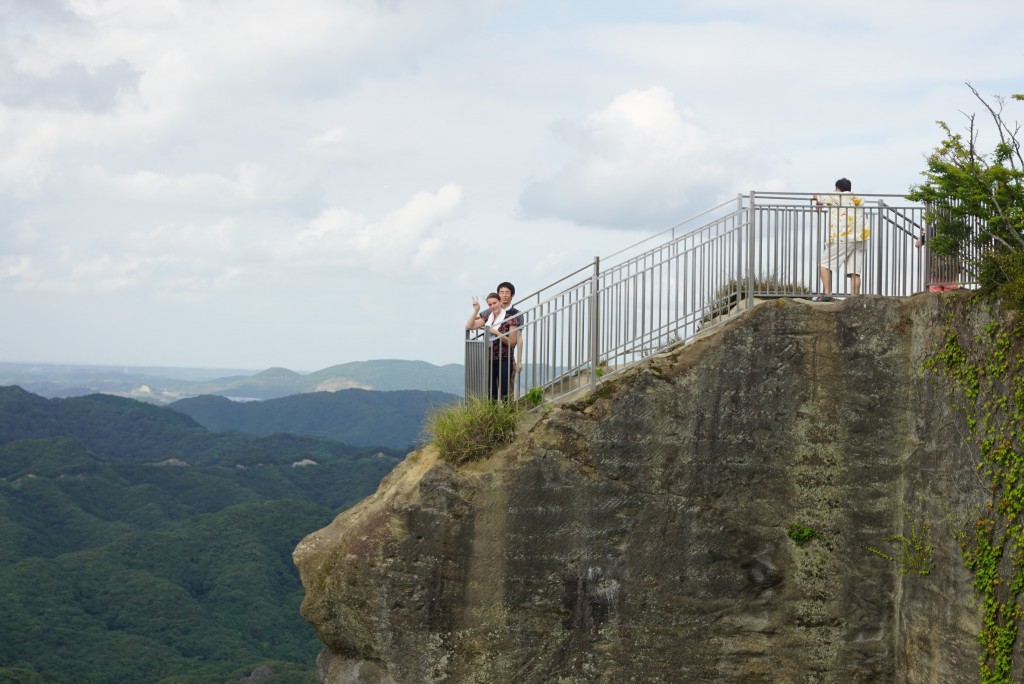 and one big budda statue as well which turned out to be less than 50 years old (but it sure was big). 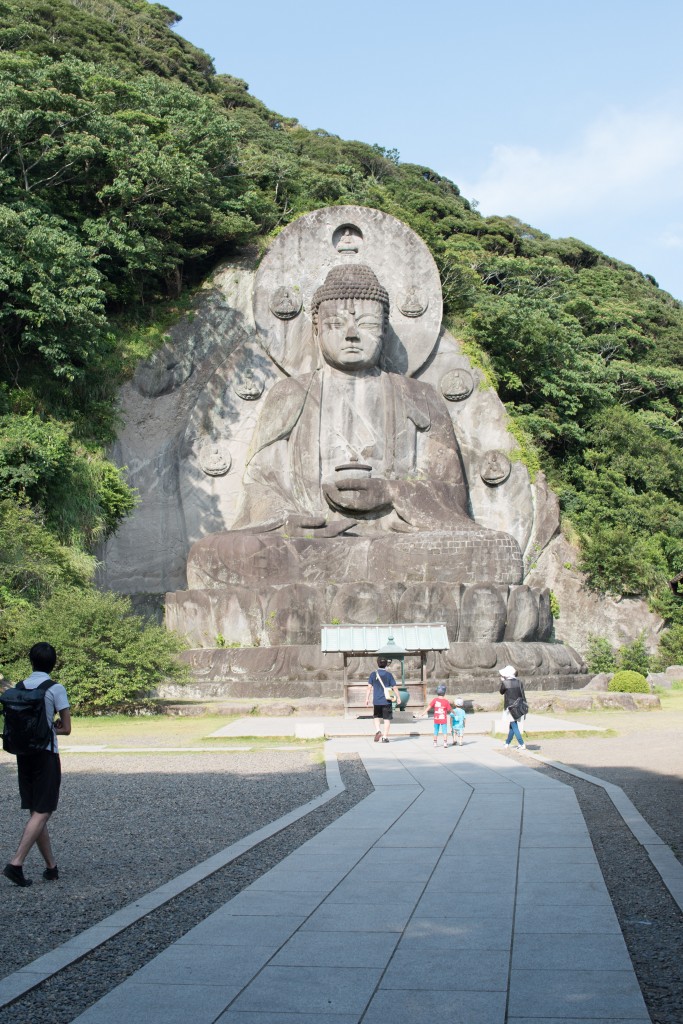 Getting into the car again afterwards was really nice for three reasons; air-condition, sitting down, and air-condition… It was so HOT!!! Next stop was “umi hotaru” at the Tokyo Bay Aqua-Line, which seemed a little bit like a department store with focus on specialities of the Chiba region – placed in the middle of the sea. It took a bit of additional traffic jam to get there, and we were all amazed by the amount of workers it took to guide the cars to the parking lot. There was one for each 3m or something (I should have taken a picture of that)! The view from there was great! It felt like being on a boat (without the swaying).

There was a hot footbath, which was really nice after the mountain climbing – footbaths are really underestimated! ^^ 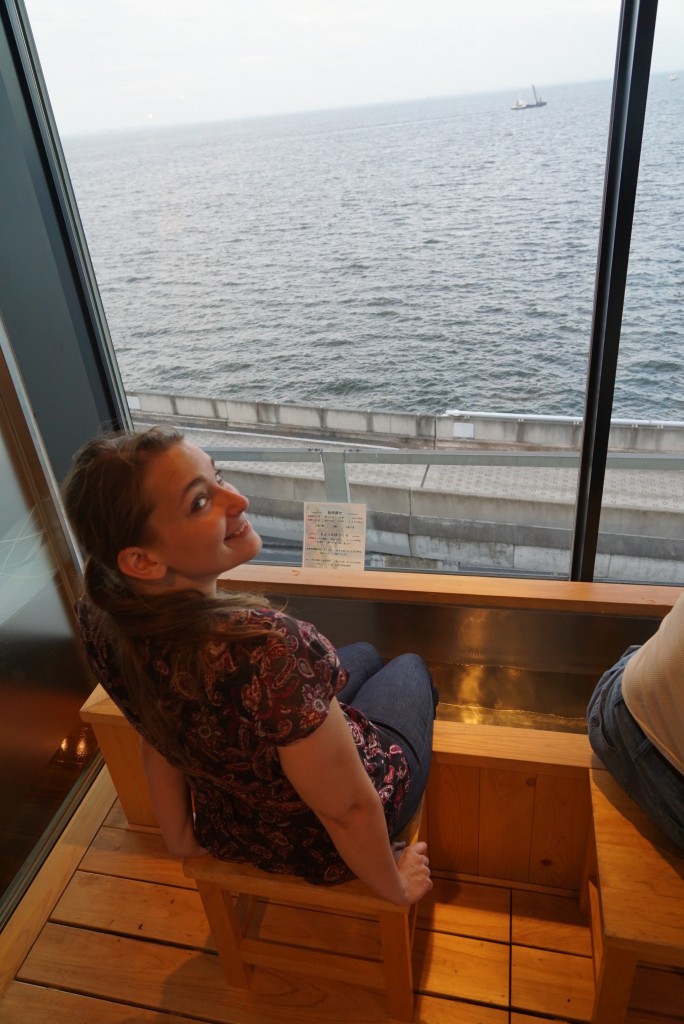 Tired after a long day, we set the next stop to Waseda where we had ramen for dinner. I didn’t know that it was common to order ramen in a sort of vending machine at the entrance of the store, and then give the ticket to the shop keeper after paying. It was really simple, but it might not have been if I had been alone since I couldn’t read the text. ^^ Apparently you have to slurp when eating the ramen noodles, however I really have a hard time doing that. It might come with some time I suppose. 😀

Finally we decided to check one of the supermarkets to see if they had a laundry basket (I had been looking around for this), and we found out that there was a daiso above the supermarket I had used so far. Daiso is a store where everything is 100 yen unless indicated otherwise, and it has practically everything. It’s an awesome store! And surely, it had a laundry basket. So with all missions completed, I went back to my room and went to sleep early. I felt a bit bad for the other guys though, since they had to drive all the way to Mito, but I was surely grateful the awesome day they’d given me.

P.s. my full photo album can be viewed here: https://goo.gl/photos/hWEcrFFiMafrSS4J9