Yesterday and today I allowed myself to “geek out” a bit in Akihabara (so now you are warned, this post will include geeky contents ^^). Initially I had planned only to go there yesterday, but I ended up coming back today as well! Akihabara is a part of Tokyo mainly known for two things; everything in electronics and anime/manga (cartoons). In this connection there are also tons of “maid cafés” where the waiters are dressed up in maid costumes to serve the costumers. There is also a Gundam café where the waiters are dressed up in robot suits (as far as I could understand) – I would love to go there, but i’ll wait until i’m not there on my own (there was also a huge line of people waiting to get inside). Next to the Gundam café there’s the AKB48 café as well, which is themed after the very popular pop music band consisting of an extreme number of pretty girls (originally 48 girls). 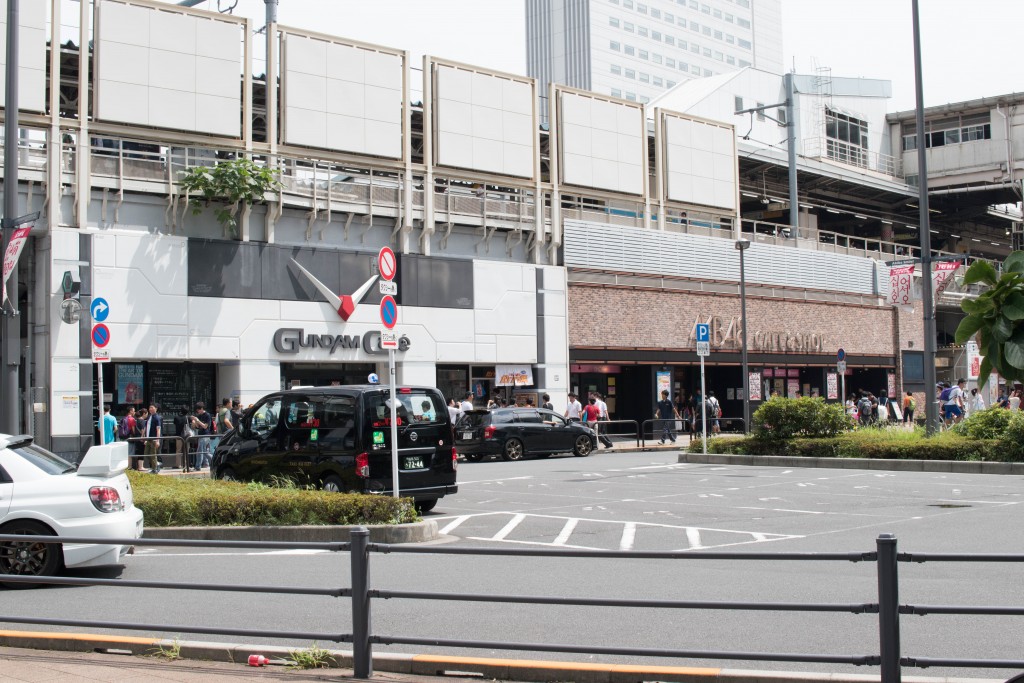 When you walk on the main streets of Akihabara, you will see commercials of anime/manga characters wherever you look, and all the building walls are covered with flashy signs and banners.

When I arrived yesterday, I was welcomed by the huge Yodobashi Camera building. Japanese people love to abbreviate everything, and Akihabara is no exception, so it becomes “Akiba” as you can see in the picture below. 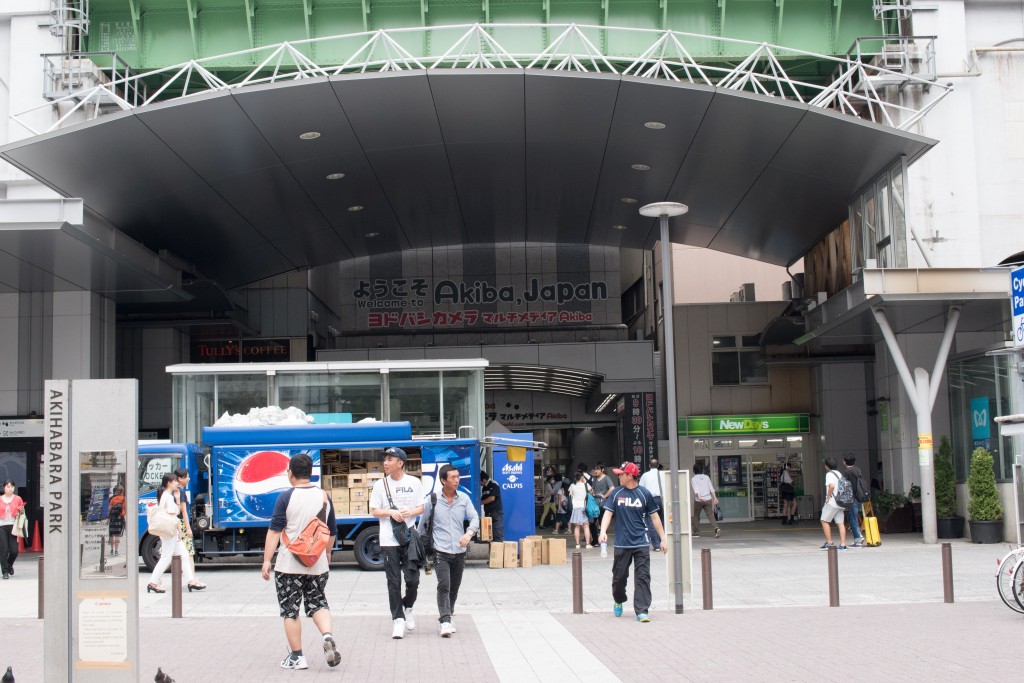 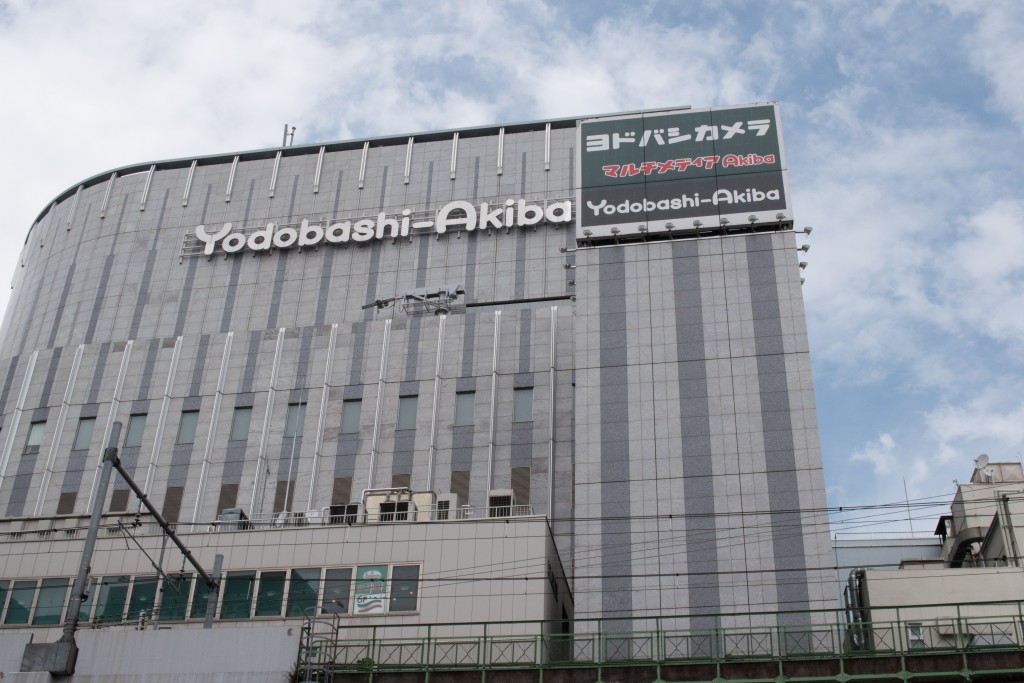 This Yodobashi store is AWESOME. It has everything you could imagine within hobby and electronics ranging from everyday items

to various types of hobby assembly kits, super hero figures, and children’s toys. I distinguished between the figures and children’s toys on purpose, since many of these are meant for display rather than playing with them (and not only kids buy them ^^). I’m sure that not everyone can see the awesomeness in all these things, but I wanted so many of these!

I was completely amazed when I entered this shop yesterday. I think I spent 2-3 hours in Yodobashi Camera alone before I moved on to the other stores, and I actually didn’t buy anything in there! And I really love the concept of being able to try out everything (ah, most things ^^). For example they had maybe 10 rows (at least) of headphones where you could try to put every single one of them on. In addition they also had a digital piano corner where you could try those out as well. And of course also tons of massage chairs where there barely was an empty one, as you of course also could try those out.

After leaving Yodobashi, I went into Don Quijote (again they shorten this and say Donki). This is the third Donki store I have entered so far, and by far the best one of them. Compared to the ones in Takadanobaba and Shinjuku, there was a little bit more open space, and a broader selection. I even bought a tea pot and a toaster in there (and some key chains with anime characters – couldn’t help myself ^^). But this store has soooo many funny things (some of them seems a bit useless though).

I had set a quest for myself for the day besides just looking, and that was to buy at least one Anime DVD and a manga I had not read before. So after leaving Donki, I went into a few other stores (Sofmap/bic camera, Mandarake) where I went directly to the manga level, and after spending a looooong time since it was difficult to figure out which manga included furigana (and also were interesting), I completed my quest. In the process of this, I did manage to buy a Luffy figure as well. There were also many cool things in Mandarake, but it felt really inappropriate to take photos in there, so I didn’t. ^^ In the end, the below was all I ended up buying for now (the magazines I bought in FamilyMart though). 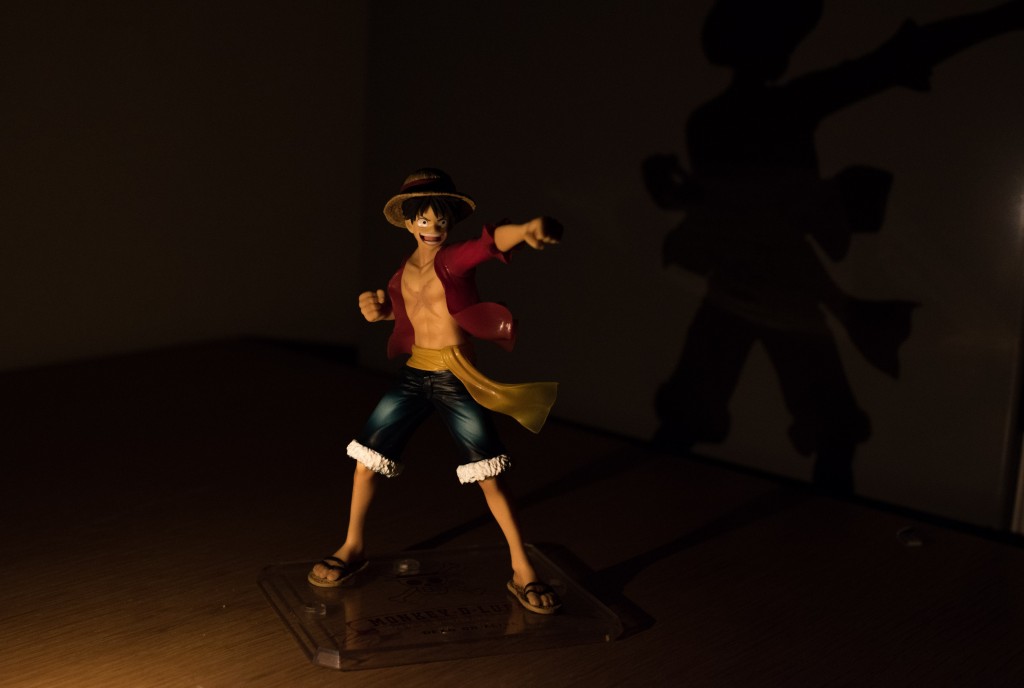 When I got home, I find out that one of the manga I had chosen might be one which has been cancelled as it only had 3 volumes with a “completed” status, but oh well – I will still read it. ^^