I have been very busy the past two weeks, but luckily (for me) not just with work. I had a lot of experiences during Thursday last week and until Monday this week, so the post this time got a bit long. ^^

Last week I worked hard on finishing a draft of a paper I am writing before the weekend where I had taken an extended weekend with Friday and Monday off. Thursday, however, went with listening to presentations by the first year master students – in Japanese. That was soooooo difficult!!! One thing is that I was not familiar with most of the topics, but even though I usually understand around 60% of normal Japanese conversations, I understood like 10-20% max here. And this was in the first couple of presentations where my mind was still fresh and ready to take in new information. The procedure was that each student had prepared a paper about his or her work, similar to a conference paper. They then went to read it aloud for everyone, and the professor would then interrupt and ask questions. When the first student went up to present, the professor told him to write the title in English on the whiteboard. They had not been told so beforehand, so they had not been able to prepare for it – so there were some interesting titles in between. Of course the rest of the students could look the words up while the first one was presenting, though. And it did help me a lot to at least have an idea about the subject, before trying to listen. In addition, most of the figures in the papers were in English, so I was able to generally understand the outline of the studies in the end.

This meeting started at 10AM and finished around 5:30PM. I think I worked for another hour and accepted that my brain could not take in anymore knowledge (もう嫌だ), so I packed up and left. Almost just immediately after leaving, I got a message from one of the students on LINE where he asked if I already left the office. I said that I was still nearby, and apparently, some of the students were planning going out drinking for a bit and asked if I wanted to join. I was surely done with working for the day, but I thought that going out drinking for a bit didn’t sound too bad. We ended up going to two different Izakaya, and in the first one, they actually sold Carlsberg (too bad it was not Tuborg Classic though) – I drank Japanese beer though (生ビールで). I ended up speaking plenty of Japanese – it’s amazing how my Japanese skill magically improves when I drink beer.  It was a lot of fun!

The next day (Friday), I went to see a Lion King musical. I had been invited to join by a friend I initially met online through the lang-8.com website. It was absolutely amazing! 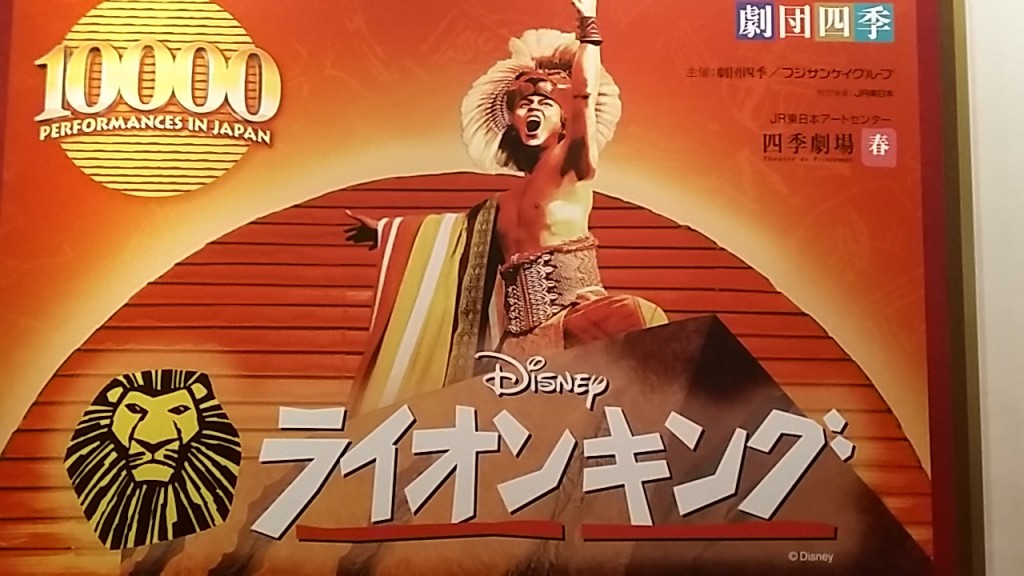 They were both dancing, singing, and acting with amazing skill. In addition, we were sitting at the very front, 3 people on the first row, and 3 people on the second just behind. It was soo close to the stage!! I felt very lucky to get the chance to see this show, as it is not very easy to get tickets (of course it was in Japanese). After the show we went out for a little walk around the area with a copy of the statue of liberty. 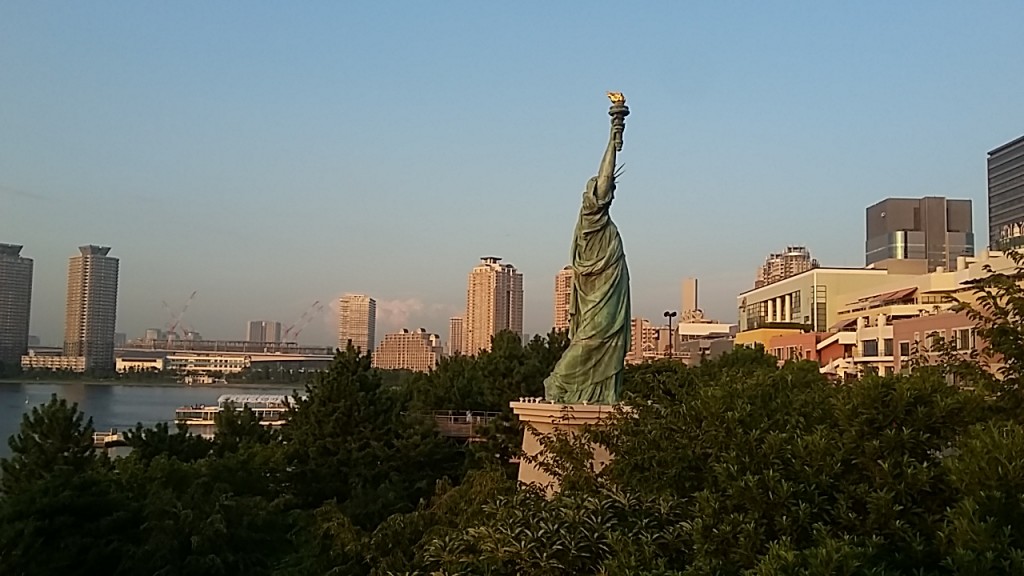 In the evening we met with some other people and went to an Izakaya. For anyone who is not aware, an Izakaya is somewhere you go to drink and eat at the same time. You order dishes to the table that you share. I really like this type of place as you get to try many different dishes. Again this evening, I ended up using Japanese a lot, but compared to during the day, I used English a bit more.

I had not planned anything Saturday since I expected I would be hungover the next day. I felt surprisingly good though, so I decided to take a stroll and do some shopping in Shinjuku. When I was standing in an intersection, waiting for the light to turn green, someone suddenly spoke to me in American English. He asked me if I was sightseeing by myself, and had this been Denmark, I would probably have said I was meeting someone even if I wasn’t (thinking he was a creep or something). But knowing how difficult it can be to as someone not speaking Japanese in Japan, I had the feeling he was a completely normal guy, longing to talk a bit to someone speaking English. He had a few hours before he had to be somewhere else, and was looking for a bar to go to. He had absolutely no clue about where to go though, so I asked him if I should tag along for one beer. I checked google maps and found the closest bar, and we went there. I spoke to the guys owning the place in Japanese, and they asked me where we were from and complimented me on my Japanese. I still am a bit too shy about speaking, so it’s nice getting compliments when trying. He was very shocked when I told him I had only been in Japan for about 1 month. After talking a bit and ordering two beers, he asked us if we knew of the “gay town” in Shinjuku. Apparently, this bar, which was located in Shinjuku ni-chome (新宿二丁目), was part of the gay district in Shinjuku. During the day (as it was when we were there), it is an office area, but in the evening it is gay town. His explanation was very funny. He said something like “In the evening, everyone – gay.” Then making pointing gestures saying “gay, gay, gay, gay”, “him too, gay”. It was a lot of fun to talk to him, and after that I realised that the two guys in the bar running the place were gay too. ^^ I would never have gone into this place if I was by myself, but I’m so glad I did! After that I had got enough new experiences for one day, so I skipped the shopping and went to rent some Anime, bought dinner at a supermarket, and went back to my place. After I had finished eating my supermarket noodles, I ended up going out again and had a few beers with the guy who invited me to see Lion King. This was a very weird day!!

Thinking I would just clean my apartment and do nothing special Sunday, I ended up going to Akihabara with another friend and the American guy from the day before. Even though I think I have seen a lot of anime, this American guy beats me (I went through his “watched-list” in the gay bar). It was a lot more fun to go browse with other people sharing the interest, than going alone. I ended up buying even more figures (small ones though), and after spending many hours in Akihabara (without going to a maid-café though), we set the course to Shibuya. Here we went to a bar, had a few beers and some weird “snake sake”. It got a bit too late, and I ended up getting home quite late. I had to get up 6:30AM the next day, since I had to go to Disney Sea with the same people I went to see Lion King with (they were visiting from Kumamoto).

I had taken Monday off to go to Disney Sea and ended up only sleeping 4 hours since we had to be there were early. But I got up in time and just managed to catch the right train on time (ギリギリセーフ)! It’s an art in itself to master the “fast track tickets” in there in order to skip the several hour long queues (although there sometimes also are queuing in the fast tracks). Sadly, we were too late to get these tickets for the most popular ride “Toy Story Mania”, but we managed to try 6 different rides. I was pretty tired in the beginning, but it helped a bit to ride a roller coaster and get the adrenalin up. We watched some musical in English and there was also a water show with the “bad guys” from Disney movies. This was quite fun to watch as well. 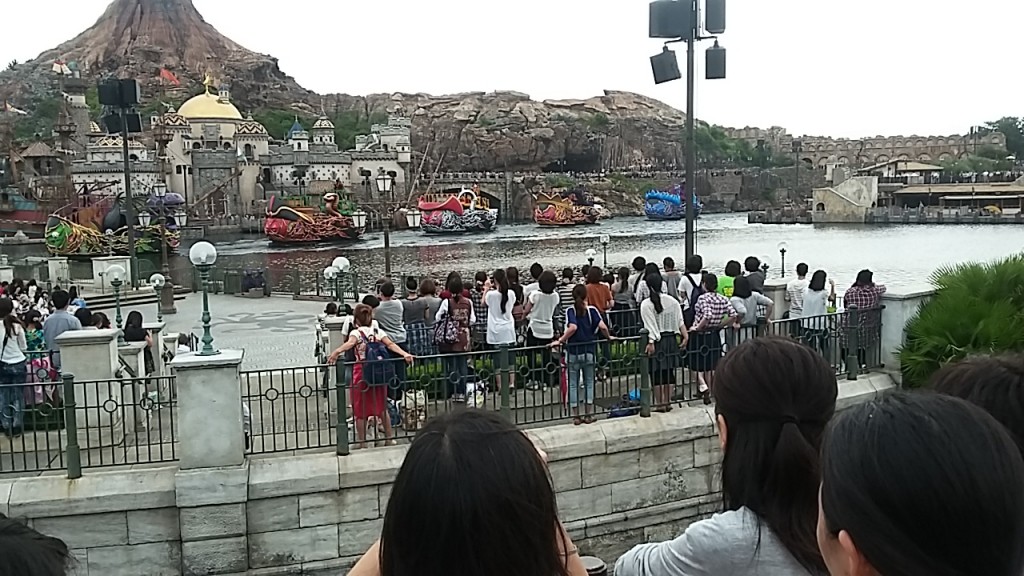 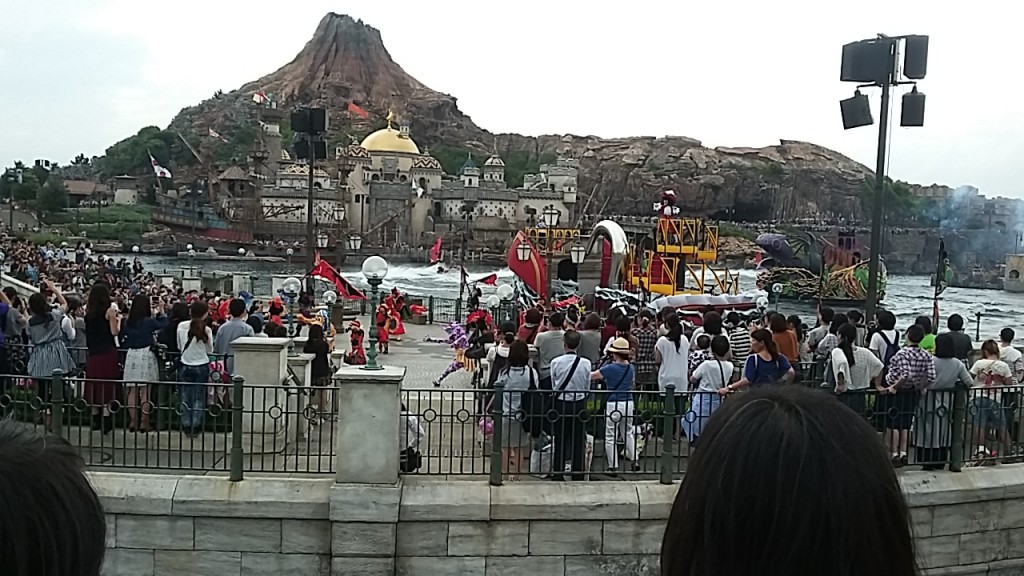 We had to wait for a couple of hours in order to be able to use the fast track tickets we got for “The tower of terror” and “Indiana Jones”, but it was worth the wait (we could sit somewhere and get a coffee and check out the souvenir shops). The tower of terror was so scary, but a lot of fun. Indiana Jones was also a lot of fun, and the picture that was taken of us was awesome, haha. We ended up being in there for 10 hours (which was a bit too long after sleeping 4 hours – but I’m glad I stayed!!). We had dinner at a small yakitori restaurant, had a few beers. During this day I almost spoke no English at all.

So all in all this extended weekend was filled with experiences, and I was very tired Tuesday at the university. In addition, I had gotten one of the female students to help me make a reservation at a hair salon Tuesday evening at 6PM. Here they understood absolutely no English, and it was interesting to explain how they should cut my hair in Japanese. ^^ Since I have to do a presentation this Friday, I ended up going back to the university after the hair salon, and work until 10PM. And today there was a typhoon over the central area of Japan, so Tokyo got very heavy rain and thunderstorms. That was also an interesting experience, but now I think I have provided a wall of text tall enough for today. ^^