It’s already been more than two weeks since my last post, but as usual I have had many things to do. Aside from moving into a new apartment (which by the way is A.W.E.S.O.M.E), I went to Hiroshima for a conference this weekend. Both I, the other PhD student, the professor and assistant professor, and 5 of the students went to the conference. The conference was Saturday and Sunday (apparently that’s normal in Japan – I doubt you’d see that in Europe), but me and the other PhD student went left Tokyo Friday morning, to have time for a bit of sightseeing as well. We met up at 7:15AM, took the train to Haneda airport, and flew to Hiroshima. We arrived at our hotel around 12, dropped off our luggage, and went back to the station to take a train to the Itsukushima shrine.

It took an hour by train to get there (Hiroshima is a very large place!), and 15 minutes by ferry to get to the island on which the shrine is located. At this time, it was already 2PM, and we had not had lunch yet – so we were starving. Hiroshima is known for several foods. One is “anago”, which is similar to eel but a bit different. Another is “Hiroshima-yaki” which is Hiroshima-style okonomiyaki in which cabbage, meat, soba or udon noodles, and egg are layered an fried and finally covered with sauce and commonly mayonnaise (I think it’s really good!). In addition, Hiroshima is known for oysters (Kaki), but even though the Japanese style of eating them is easier for me than the European style, I really have a hard time eating those. Finally, Hiroshima is known for their Sake (Japanese rice wine). When we came to the island with the Itsukushima shrine, we chose to try Anago – and we probably received the smallest portion served on the whole island. ^^ I didn’t take a picture of the food, but I had my picture taken near one of the other restaurants on the way to the shrine. ^^

It was raining the whole day, which was a bit too bad, but it was still very nice to do something else than work. Taking pictures with my camera while holding an umbrella, was a bit annoying though. But I did manage to take a few pictures anyway!  There were a lot of deers walking around everywhere on the island, and they were not at all afraid of humans. Some of them would even approach people in hope of getting food. 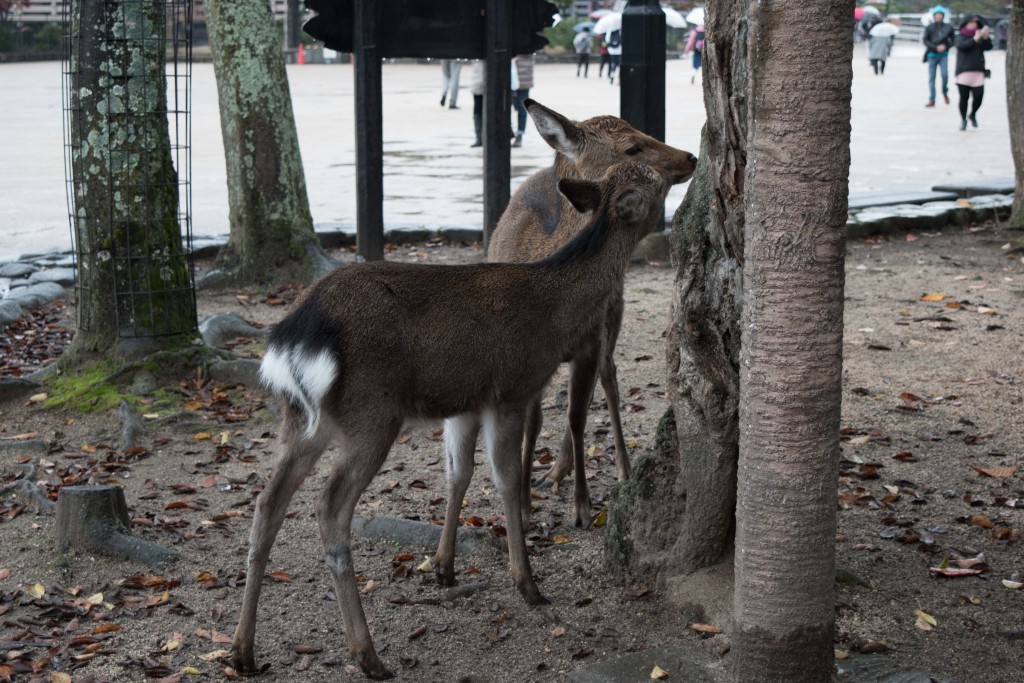 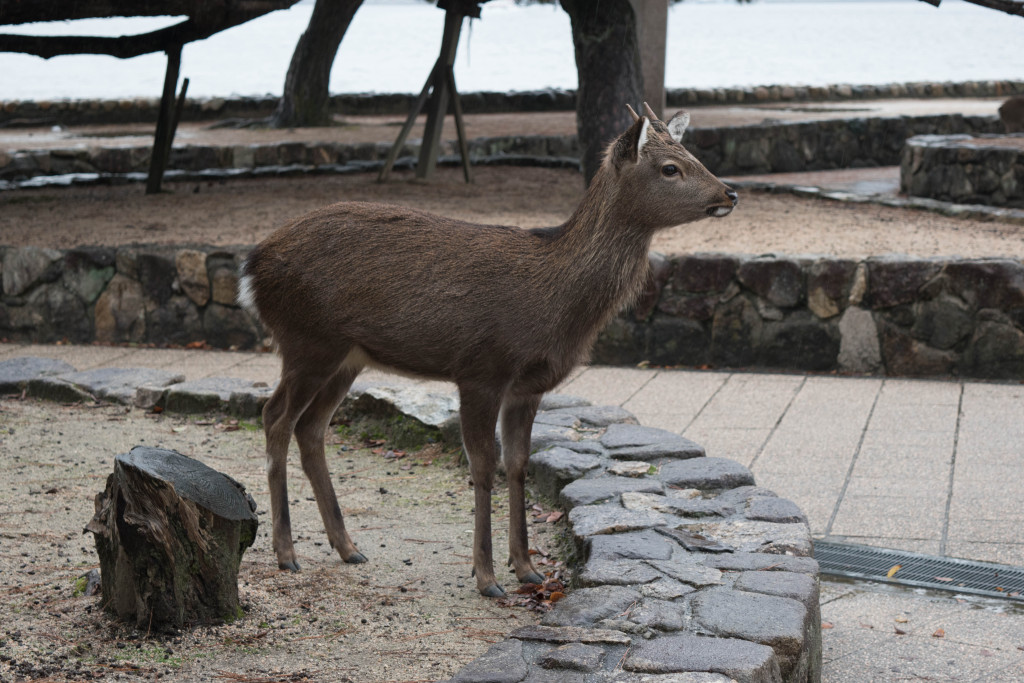 One of the main sights of this shrine, is a large gate placed in the sea. Sometimes at low tide, you can walk all the way to the gate, and at high tide you’d need to go there by boat to see it. When we were there, it was low tide, so we could walk out there. 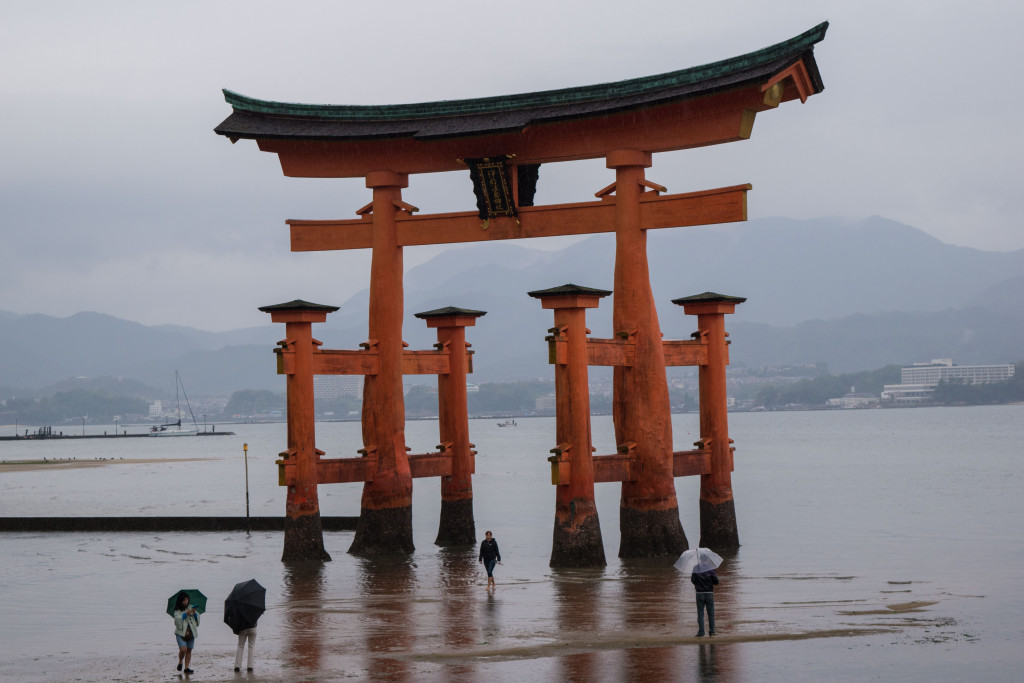 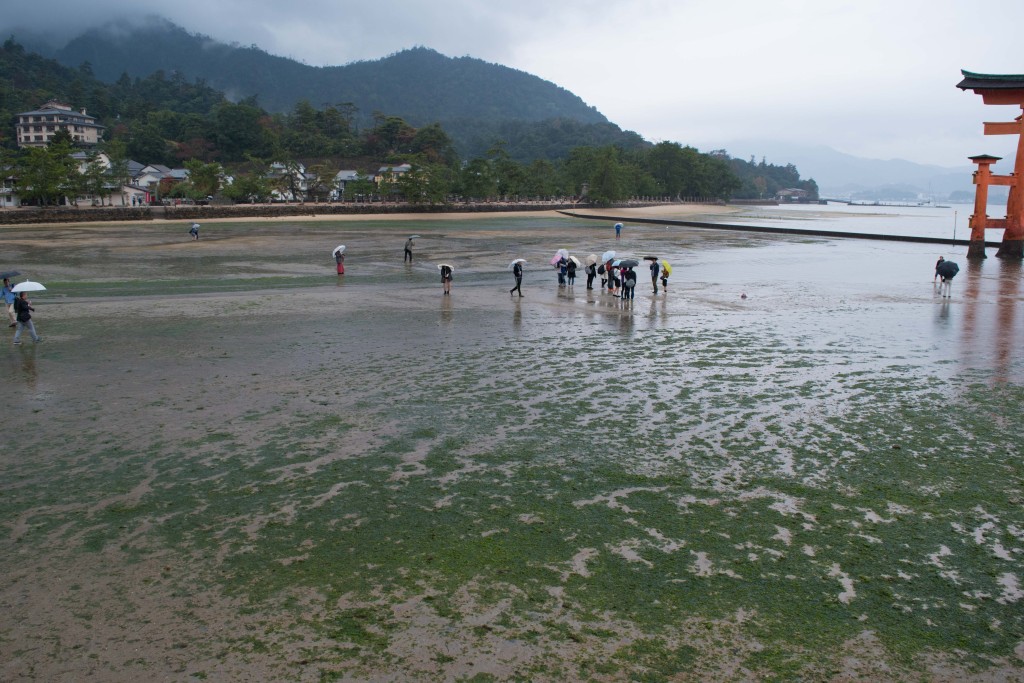 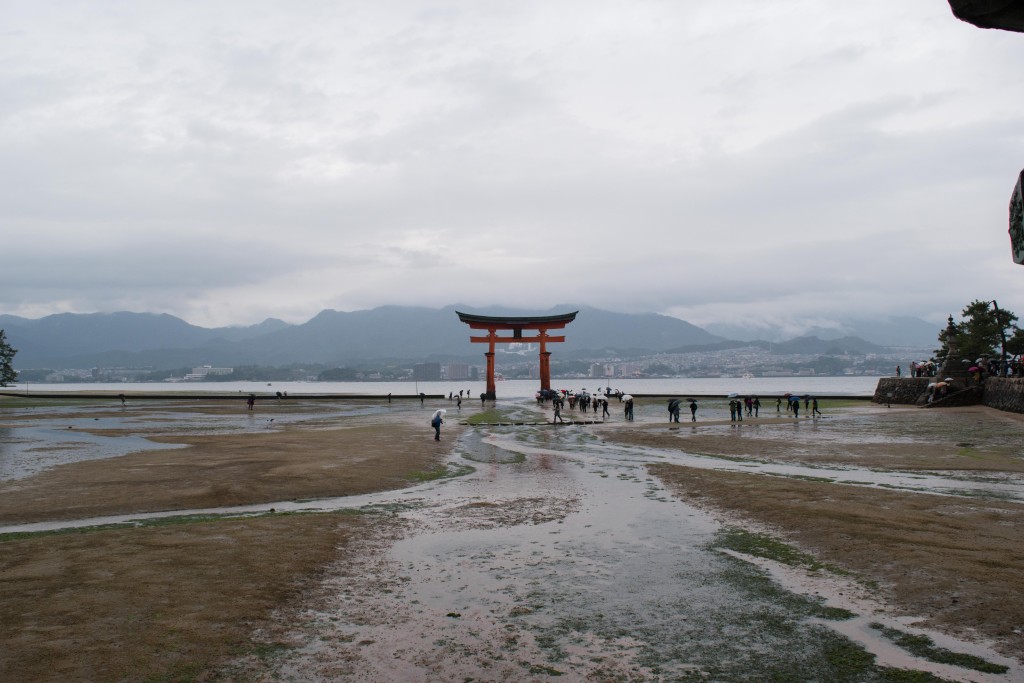 And of course we also took pictures of proof that we were there! 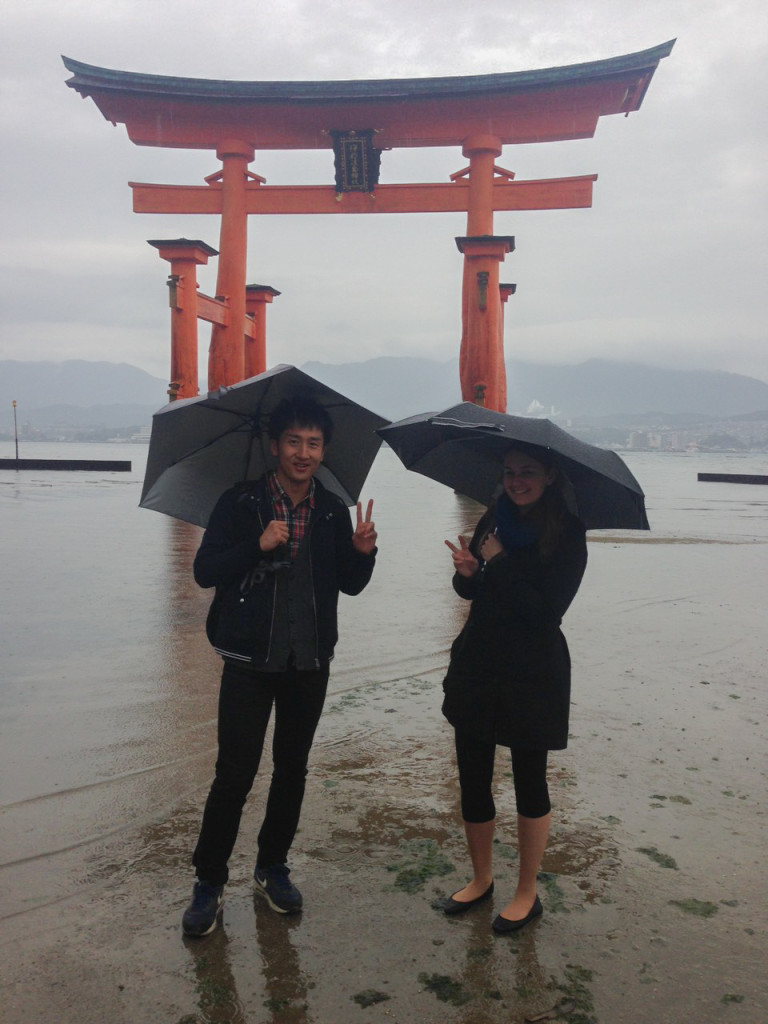 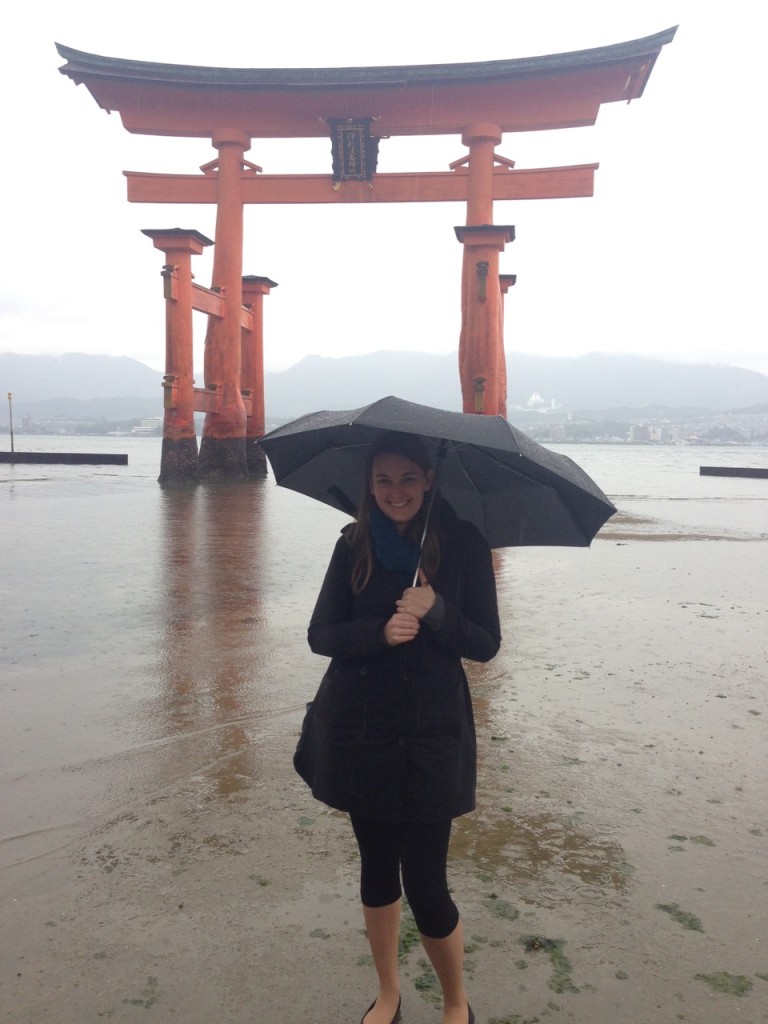 From what I’ve heard, the gate is only standing on the sea bed by it’s own weight and is not dug into the ground. I’m not sure if it’s true, but it surely looked like that when we went and looked. If it’s true, it’s surely amazing that it hasn’t tipped over, but apparently this locations is quite shielded from waves etc. 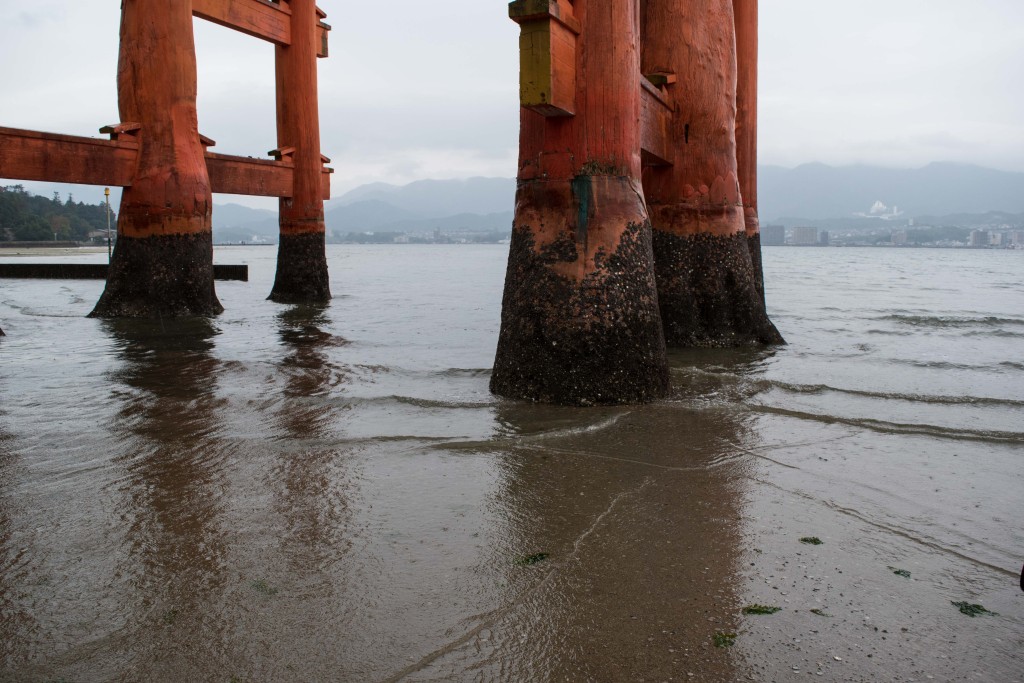 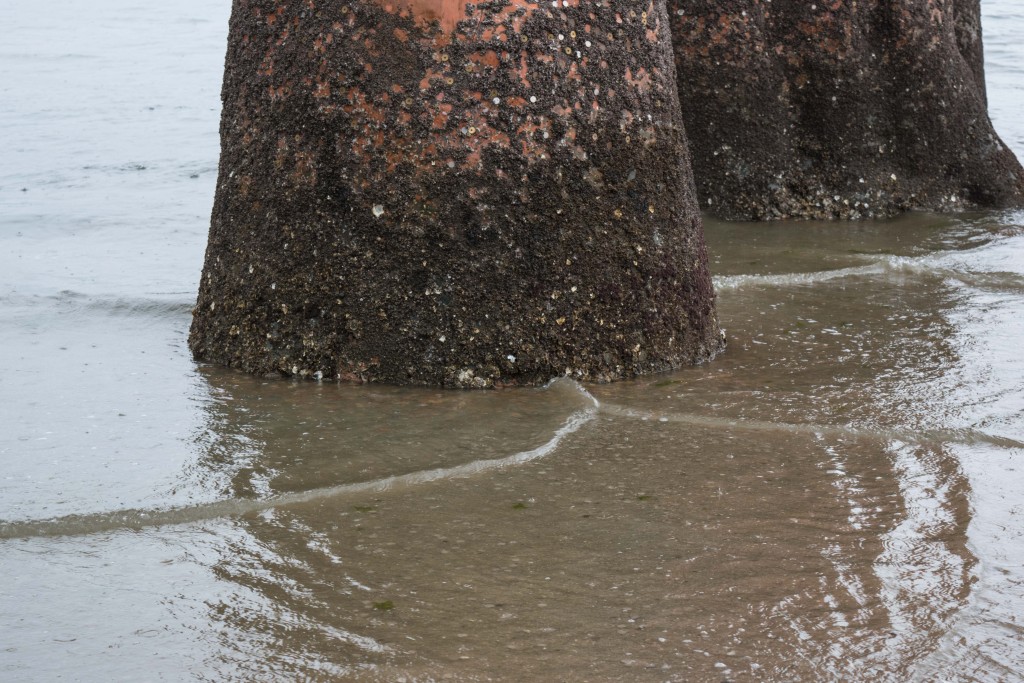 I could imagine that this shrine would be extremely beautiful on a day with sunshine and high tide surrounding the shrine with water, but seeing it at low tide like this – despite the rain – was also very pretty. 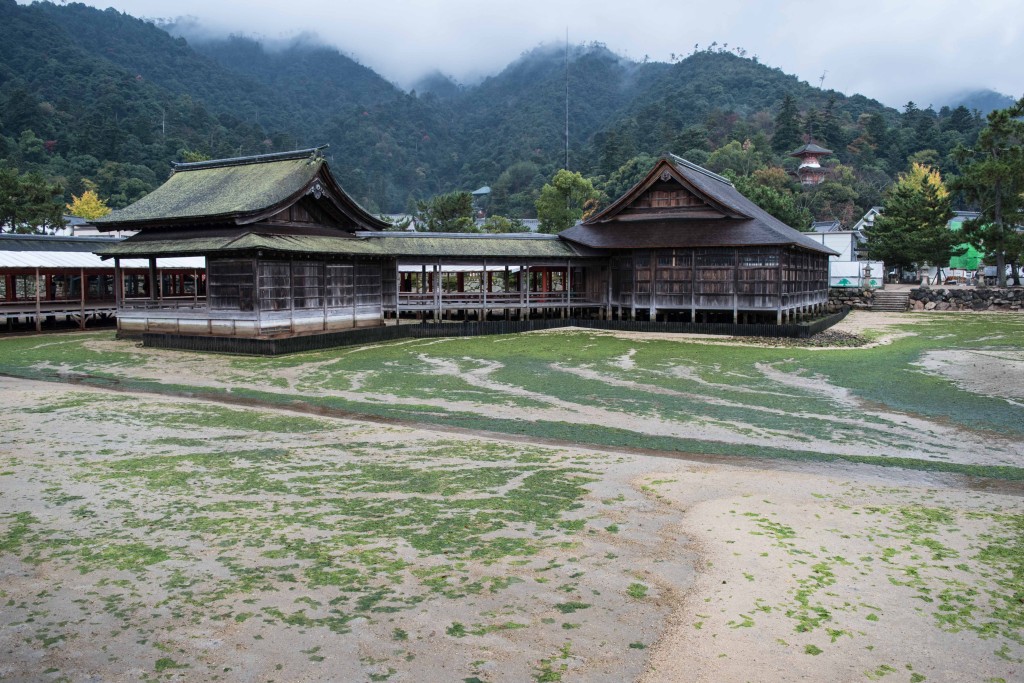 Praying at this shrine should apparently be very powerful, so of course we went to do so. In addition, we drew our fortunes, and I got a very good one! The shrine itself was beautifully red colored, and protected by two dogs I think it was (I would have guessed lions though. It’s the two statues on each side of the building in the below picture. 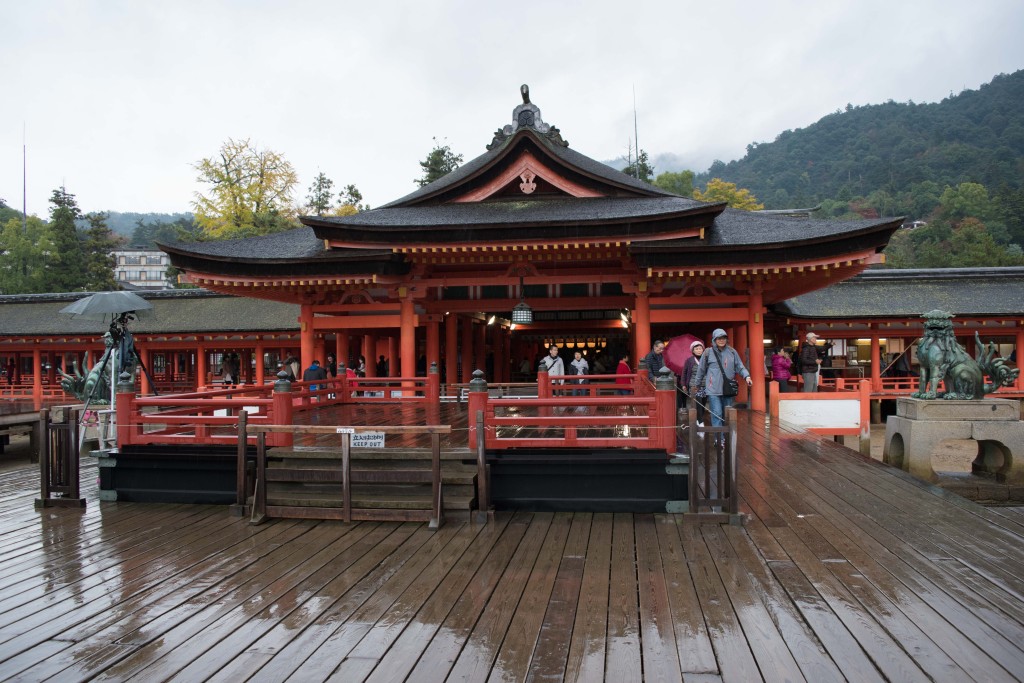 I was particularly amazed by a bridge which seemed ridiculously steep (might be difficult to see how steep it actually is in the picture), which made me feel like climbing it. Too bad the entrance was closed off. ^^ 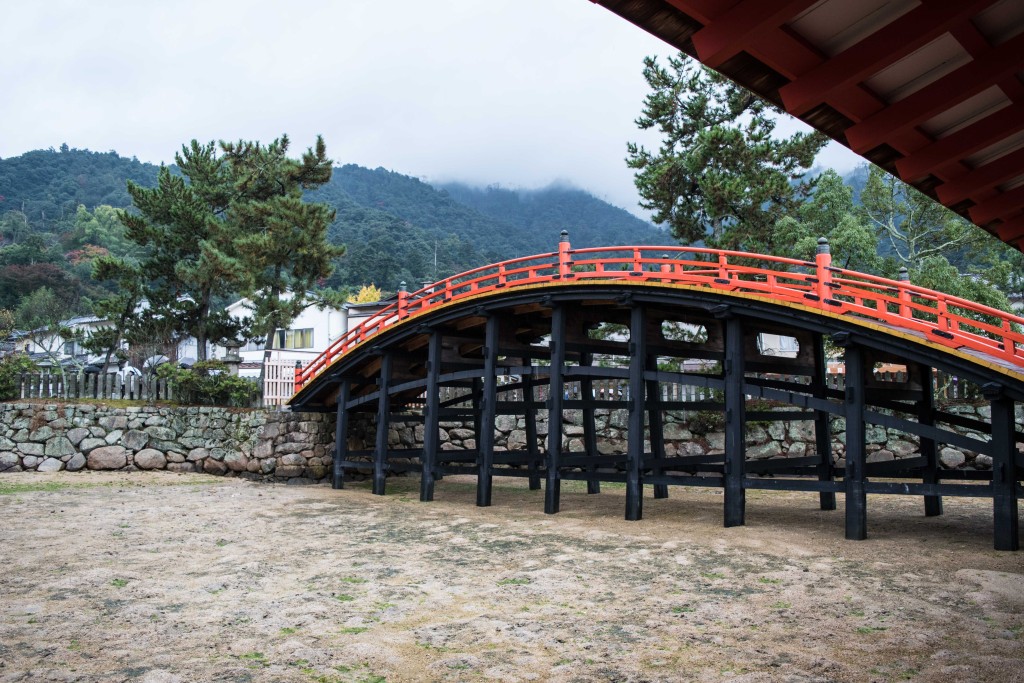 In the original plan, we had a dinner reservation at 7PM, so we were planning on going to see Hiroshima dome afterwards. But while we were are the shrine we received an e-mail from the professor saying that the plan was changed and that the dinner was starting at 5:30, so we had to hurry back all of a sudden. In addition, the dinner which we had thought to be only 5 people turned out to be 24 people, and I had to introduce myself sooo many times, answering the same questions over and over. It was extremely exhausting!! However, we tried many different extremely good Sake (Japanese rice wine)! One of them was extremely good and had a fruity taste – I can really recommend that one (安芸乃風雅)!

The next day, I had a poster presentation and speed presentation (3 minutes) on the conference. The whole conference was in Japanese, and only my presentation was in English. Therefore everything was a bit more exhausting than usual, since I had to focus all the time. In the evening there was a short conference dinner (eating while standing) where I had to introduce myself to a lot of new people again, and again answer the same questions – but it was ok. After that, we went to Hiroshima station to meet with the students, but as it was really far away, we didn’t stay late. It was a bit too bad, as I felt like having fun with the students, but I think we were all exhausted as well. The next day some of us went to eat the Hiroshima style okonomiyaki for lunch, and it was so good! But the portions were so large – everyone were fighting to finish, but in the end, I was the only one who left anything on the plate (Japanese people are really raised to eat everything on their plate).

The students were not going back until quite late in the evening that day, so they had some time to go sightseeing. Luckily for them, it was sunny this day (of course). Me and the other PhD student went directly from the Okonomiyaki store to the airport, and flew back to Tokyo. I was home around 7PM, and completely exhausted. The trip was a lot of fun, but I had hoped that there’d be more time to have fun with the students – but it was a trip for work after wall, so it can’t be helped. ^^

Even today, I am still feeling exhausted, so I left the university a bit earlier than usual (that means before dinner time), and therefore I had a bit of time to write a post! That’s all I have to say for now!!