After a very successful stay abroad in Japan, I did not have to think hard when I got the offer of spending some Japan-Denmark fund money to go back for a visit. In the beginning, my supervisor just told me an amount of money that he thought would fit to a visit of a few weeks or maybe a month if pushing it. However, as soon as he told me this I asked the Professor at Waseda University whether I could visit once again, and never has he answered me so fast. The answer was yes. Therefore, I contacted the administrative staff at Waseda University and asked whether it was possible to recieve the research fellow position once again in order to stay in the guest house and recieve an access card to the university. I had to fill out some paperwork, but with the help from the awesome staff it worked out so that I could get cheap accomodation compared to staying in a hotel. Furthermore, I bought the plane tickets a long time in advance on cheap days (total of around 5000 danish kroner for a direct flight). Because of that, I could easily get enough support for a work stay of 4 weeks. Then I also decided to include some holiday while I was there, so my trip this time ended up being 6 weeks!
And then yesterday was the day I took off for Japan. Yesterday morning me and my mom went to Field’s (a shopping mall close to Copenhagen airport), since there were a few souvenirs i had forgotten to buy. 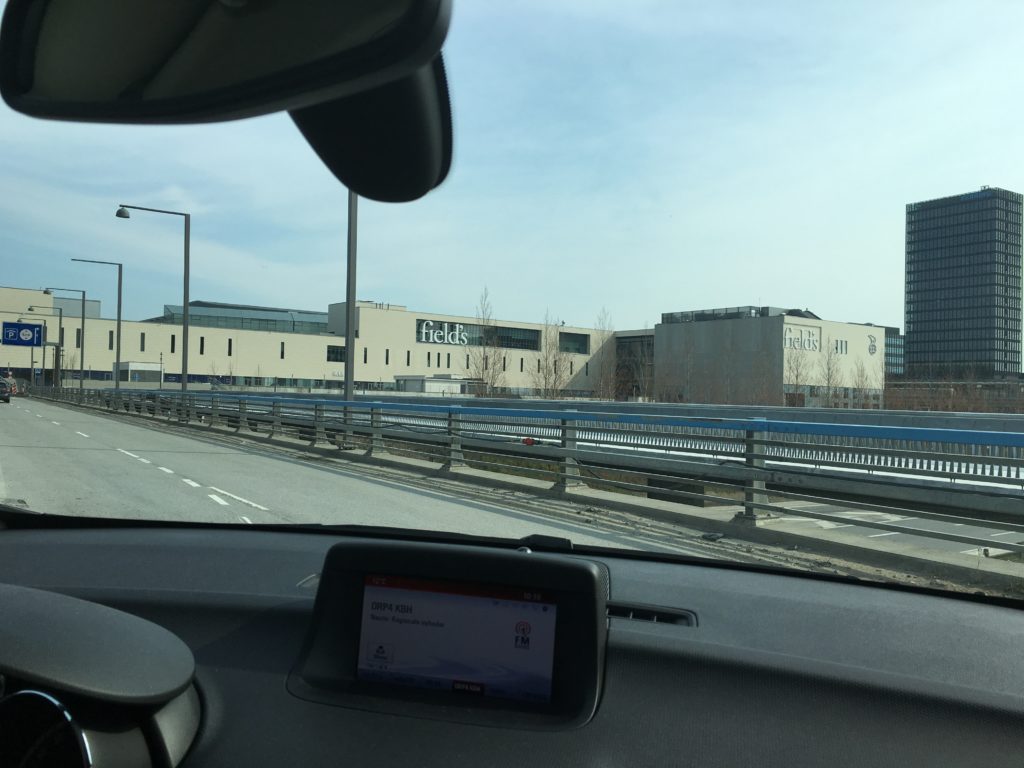 I had a brunch plate at “Mammamia” and was surprised about how good it was… Not the worst “last meal” in Denmark for the next 6 weeks! ^^ 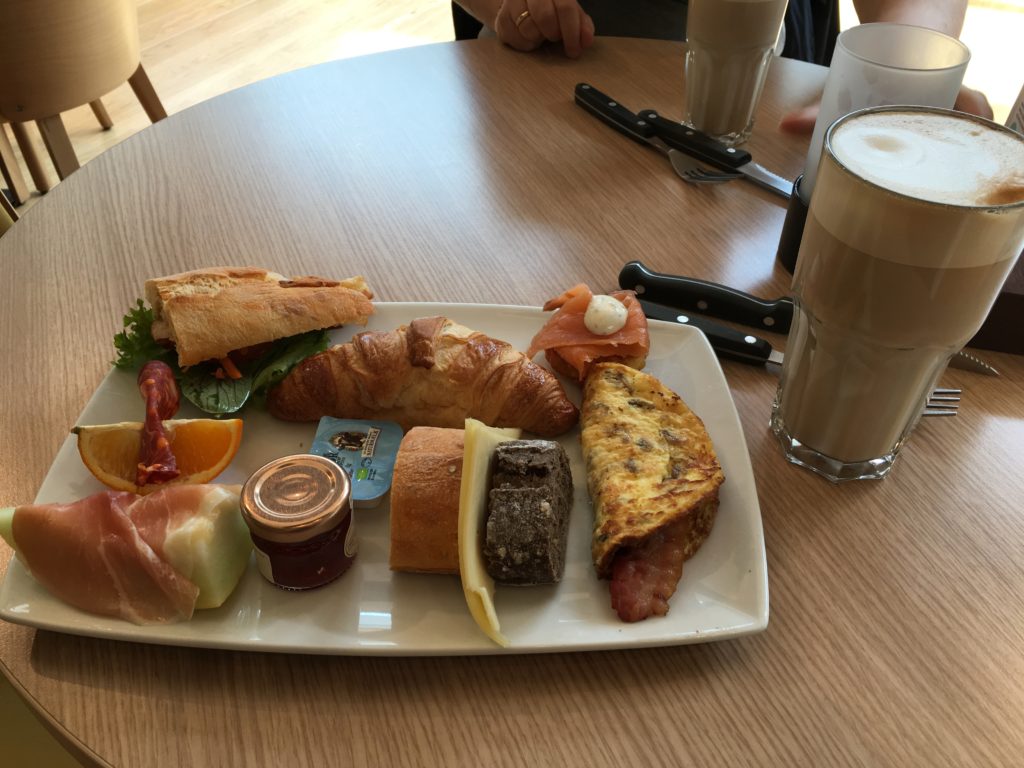 After finding the souvenirs we went to the airport, and I got through very fast. The automatic backage drop system really has sped up everything compared to how it was some years ago. It did not take more than 10 minutes (probably less) to get rid of my luggage. By coincidence, due to a slight trafic jam of chineese people at the entrance to the security check, I got in through the express line. Therefore, I entered the shopping area of the airport extremely fast, and had plenty of time to walk around and also to sit down and have a beer (even though the glass label said Carlsberg, it was of course a Tuborg Classic ^^). 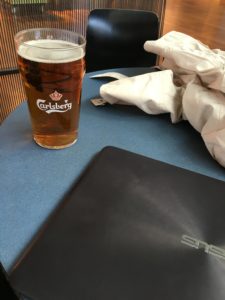 The plane departed as scheduled and since it was really nice weather I used the opportunity to take some pictures through the window in the airplane. 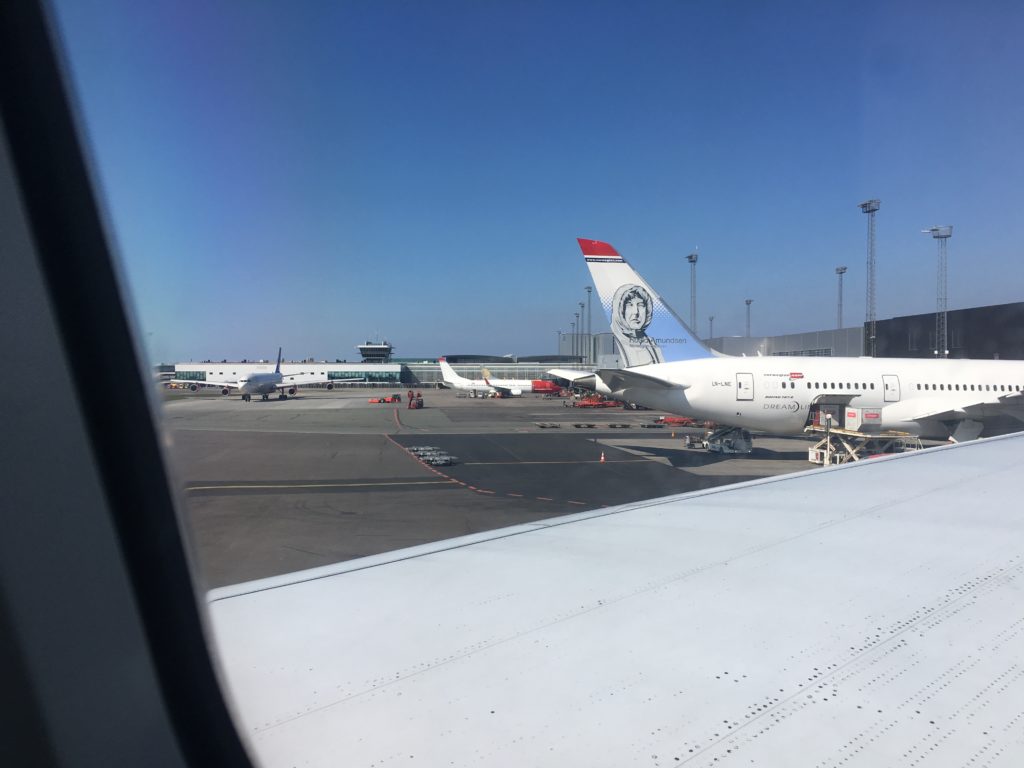 The view during take-off was really pretty, showing the patch-like “texture” of Denmark from above the ground. 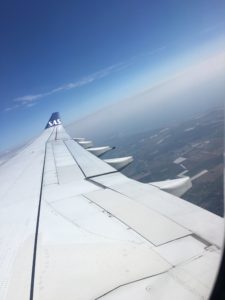 For once, I actually thought the food in the airplane was decent. We had curry rice with… chicken… I think. ^^ In the hope of being able to sleep a bit later, I had another beer for dinner. 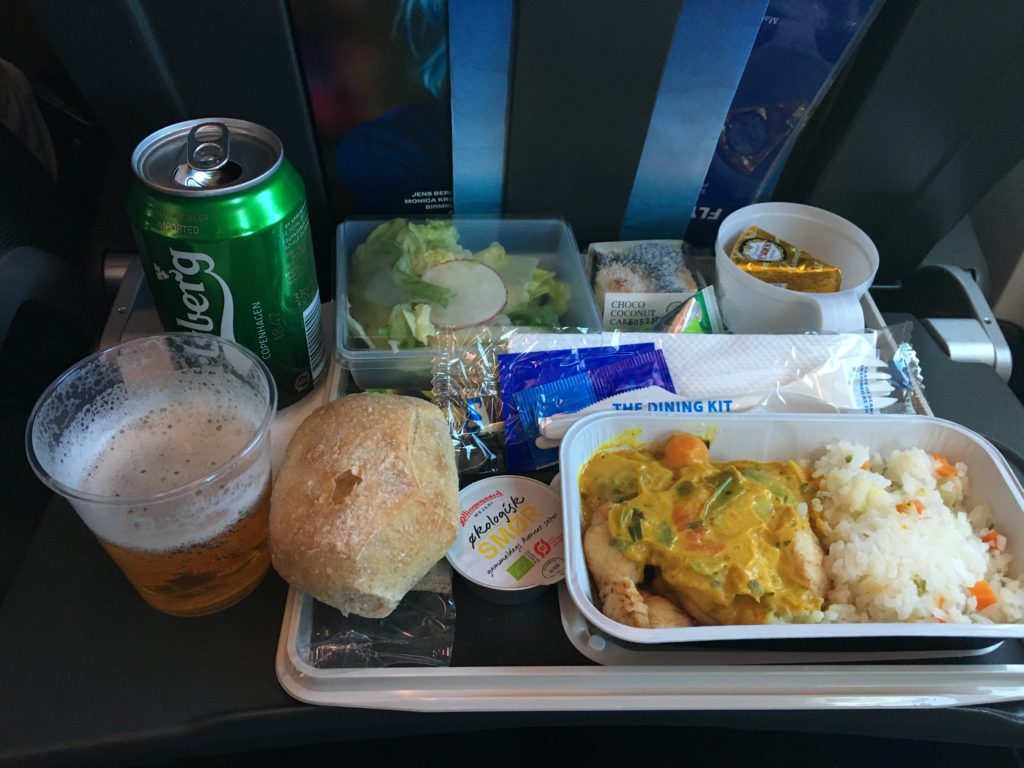 Even though the seat next to mine had been booked earlier, it turned out to be vacant. Time might have passed faster if there had been someone there, however because of that I could easily read through a paper I promised my supervisor to review (I thought it might help me in my quest for sleep, but it was actually pretty interesting ^^). But another advantage of a vacant seat next to mine was the increase in number of possible sleeping positions, as I really cannot sleep while sitting upright. But… as expected, even though I tried for a few hours, I still couldn’t sleep in the end. We were also served breakfast on the plane according to Japanese time (hence around 2AM in Danish time), so I was not particularly hungry when I got the food, but it was ok. 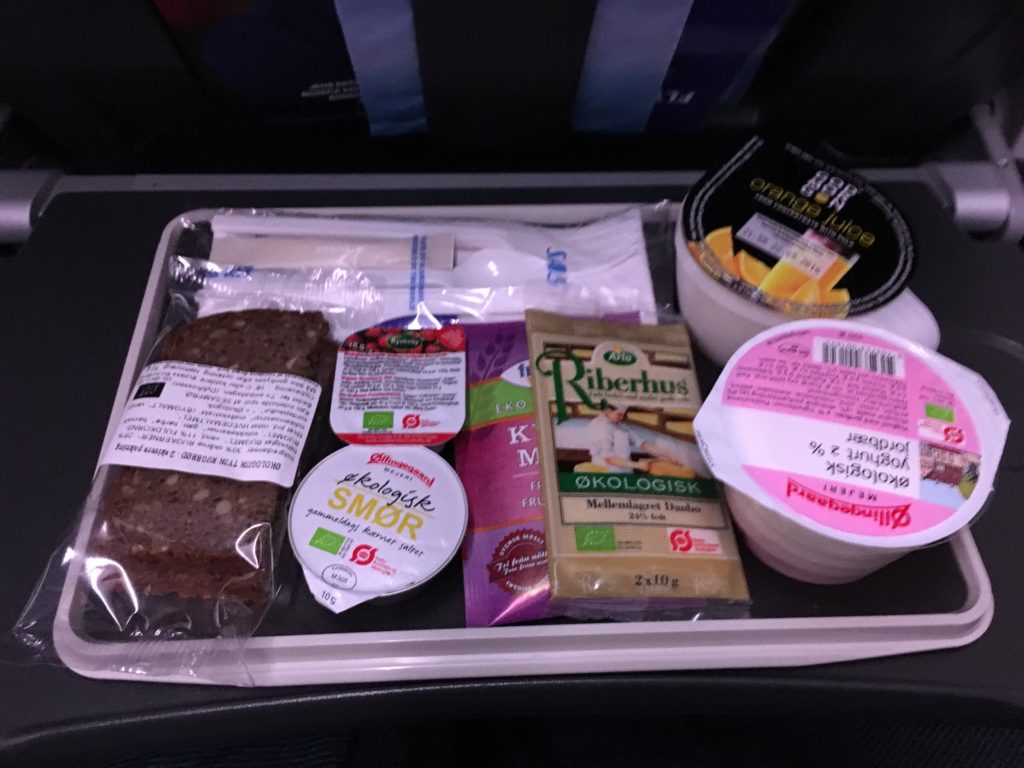 Everything went fine when arriving to Narita airport, and I got to the apartment by train. In order not to fall asleep until evening, I went out to get a data sim card and I also bought one more Japanese study book. The prepaid sim cards you can buy in Japan as a tourist are fixed to an amount of data and also a time range. Since I am staying here for 6 weeks, I had to go into a few stores to find a good solution where I don’t have to change simcard again after 1 month. What I ended up with was the “Prepaid LTE SIM” from “So-net” with 3GB over 60 days. 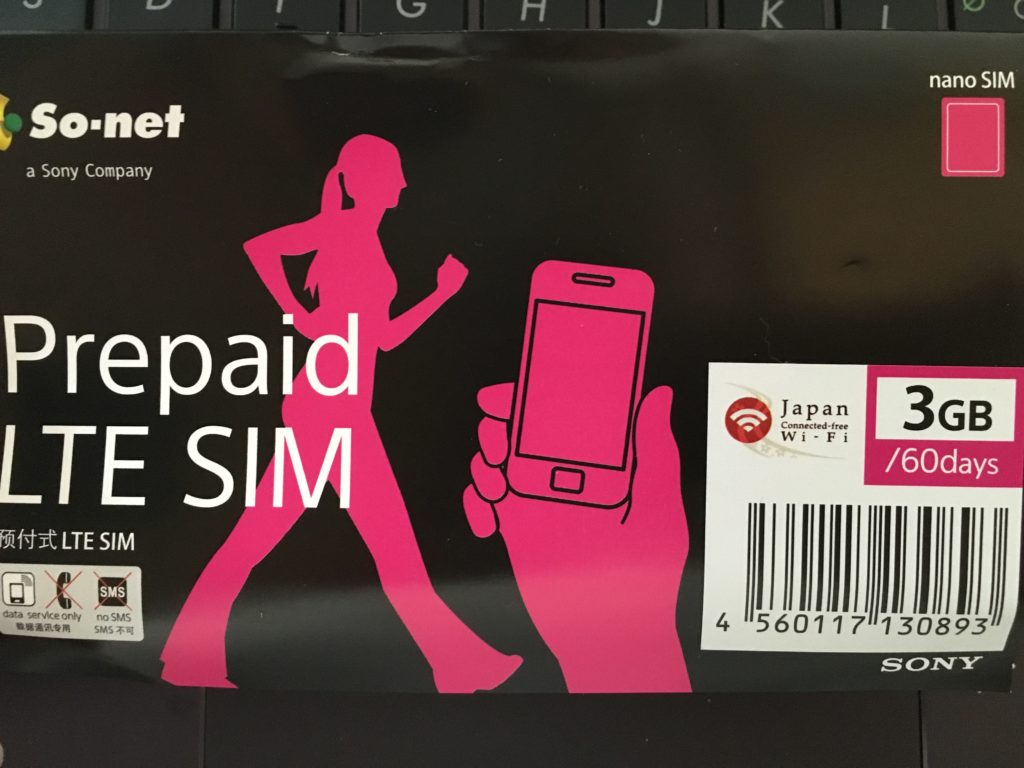 It cost me 5000 yen (around 250dkk). I might have been able to save some money by chosing another solution and refilling the data if necessary, however I wanted something which I did not have to change again before I return to Denmark. It was easy to set up on my Iphone 6s, and it seems to work well. So now that I have my phone up running, I can go out without getting lost! Finally, I had Soy Ramen (noodle soup) for my first dinner here, which was really good. I really feel like a tourist when I take photos of my food before I eat it, but here’s how it looked! ^^ 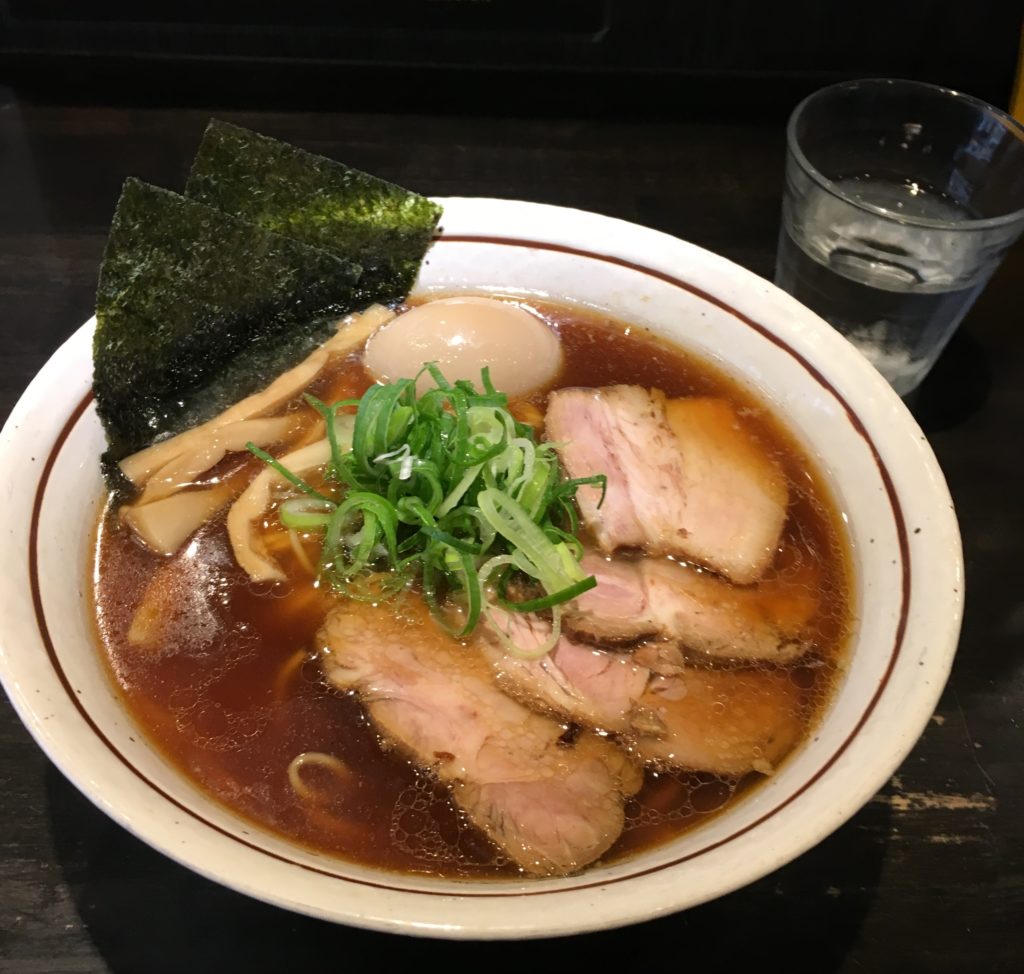 That was it for now. Until next time!