I finally found some time to write on my blog after some busy weeks preparing for a conference in Munich, and today I will write about a weekend trip to the Tochigi prefecture north of Tokyo, Japan.

We took off towards a car rental place on Saturday around noon. Not that it necessarily was impossible to go there by train and bus, but as it would be much easier if we had a car, we decided to rent a car for the entire trip this time. The car rental place was in Ikebukuro, and the rental car was a Toyota Aqua – a hybrid car. It seems that the Toyota models in Japan differs from the ones in Europe and the Aqua is similar to the Prius, I think.

We stopped on the way and had some lunch at a service station which was surrounded by mountains (not uncommon in Japan, but not to be found in Denmark ^^).

We did not have any particular sightseeing planned until Sunday, so we just stopped by a supermarket to buy a few beers and some food for barbequing. I had noticed before that barbequing in Japan is a bit different from in Denmark, but I had never tried this type of grill before. It was small and highly insulated so it could stand on top of a picnic blanket. After heating up the coal initially, they were set aflame by blowing with a fan into a small hole near the bottom of the grill.

We had bought different types of sliced meat, sausages, cheese, and asparagus to put on the grill. Since it could stand right next to you, you could eat everything straight off from the grill and I think it’s quite a nice concept if you are not too many people. 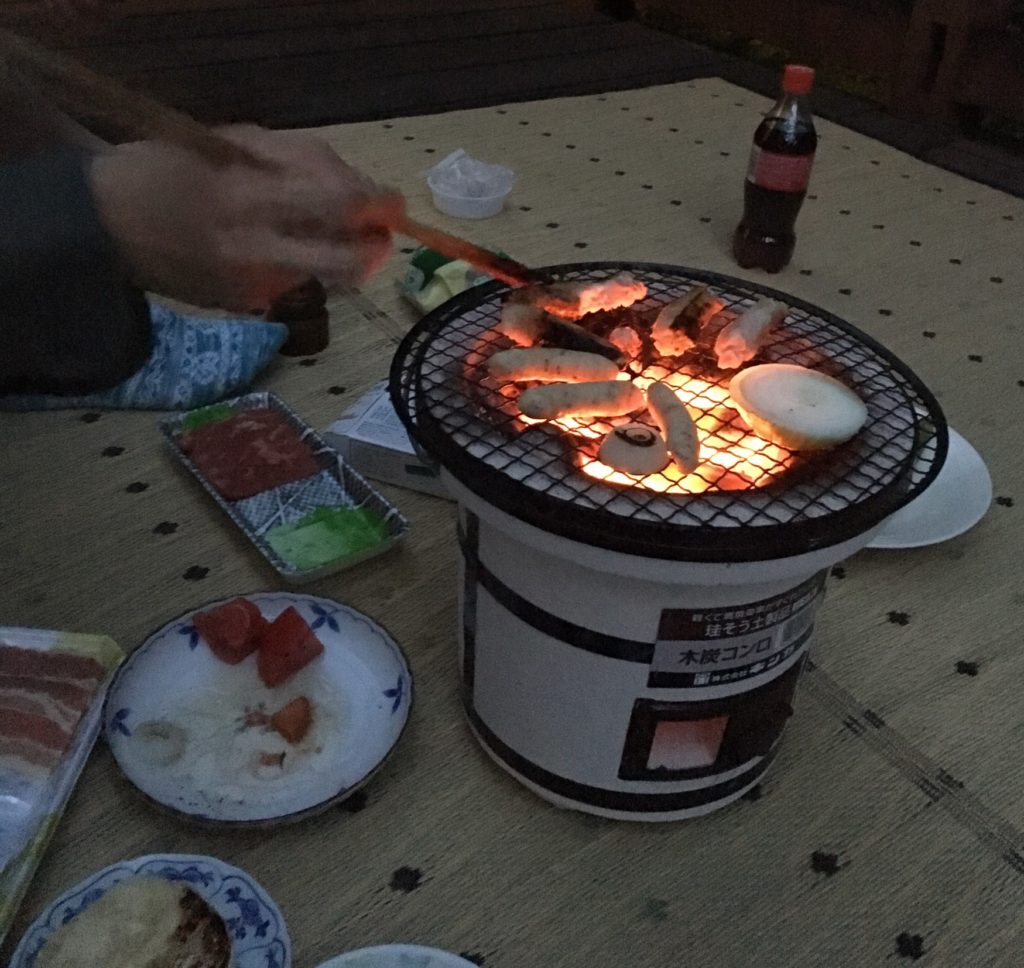 Unlike the first day which was mainly spent driving and just relaxing, the second day was spent sightseeing in Nikko. It took some time to go there by car, however following the fastest google maps route we got to drive on some beautiful forest roads.

It took us some time to find a parking space and maybe we ended up parking at the most expensive place in all of Nikko (nothing compared to Copenhagen though. I think it was around 500 yen (25kr) in total ^^).  As I have mentioned before, most places in Japan are known for some kind of food, and in most cases it is Soba. That was also the case here, however this type of soba had some kind of tofu thingies on top of the noodles (I can’t remember their name now). As regular tofu, they really had no taste, but it was not bad.

In Nikko we went to a few famous sightseeing spots such as a red bridge which you had to pay money to pass (seemed like a waste as the exit was blocked).

…with some famous three monkeys…

… and around 200 steps to the top (I think it was). Many of the children were counting while climbing the stairs (most of them seemed to have made a mistake on the way though ^^).

The final stop was a waterfall near the top of the mountain. To get there, we had to drive the curly mountain road for around half an hour I think. To be able to get to the observation deck of the waterfall, you need to ride an elevator down and this closes at 5pm. We barely made it in time – I think we were there around 4:30, however thanks to that it was not so crowded. You can also view the water fall from the top…

However, it was quite different to see it from the observation deck. It was very beautiful, but at the same time gave a sense of how powerful and scary nature can be. Very fascinating.

After watching the waterfall we headed back towards Tokyo. There turned out to have been a traffic accident and we used google maps to find the fastest route. It ended up leading us on a huge detour (although it might have been faster than getting stuck in traffic jam), and it took around double of the expected time to get back. Somehow I always seem to get stuck in traffic jams when traveling around by car in Japan ^^. We arrived at the car rental place in Ikebukuro around 9 or 10pm (which by the way is not a recommended place to drive car in the evening! I’m glad I wasn’t the one driving), and being exhausted we decided to get late dinner and some beers at an Izakaya before going home.

That was the story about visiting the Tochigi prefecture along with Nikko! The next will be about the final weekend trip on my previous trip to Japan which went to Kamakura!