I have been so busy that I didn’t get to write anything on my blog for more than a month I think! Since I wrote my last post here, so many things have happened that I don’t even know where to start. I really need to get back to writing a post at least every week, but lately my weekends have been busy so I didn’t have the time.

Oh well, let’s see. Since my last post I moved apartment, went on a 3-day trip to Karuizawa with everyone in the lab (it was awesome but I barely slept), got visited by my boyfriend for two weeks, went sightseeing in Tokyo, went to Kyoto for 3 nights, and when we got back to Tokyo we went drinking with some of the guys from the lab. Today my boyfriend took off to go back to Denmark, and on Thursday morning my brother is arriving to Japan. Phew… That was a lot of things! I think I’ll have to split this up into more than one post… ^^

Hmm… Let’s start with the lab trip to Karuizawa (Nagano). This post will not contain many pictures, but I took a lot of photos in Kyoto, so I will include more pictures in some of the coming posts. The trip had the main purpose of housing the presentations from the 3rd year bachelor students, who over the summer had been working on projects with the help from their senpais (1st year master students). The PhD students (me and another guy) and the 2nd year master students didn’t have to prepare anything for the trip, so we arrived one day earlier than the others to have fun. We went by car, and as always when driving in Japan, it took quite some time because of traffic jams! However it was nice to chat in the car, and I got a chance to talk a bit to some students I didn’t know from the lab.

We arrived around 2PM and went to do some sports in an indoor gym. I am not particularly a sports kind of person… the only type of sport I am any good at is badminton… but the sports we played there were no regular sports. Well ok, initially we did play regular volley and my right arm ended up all bruised because I’m not used to it, but after volley, the genre changed a bit. For example, we had goal shooting competitions in basketball (with your back turned against the hoop) and soccer goal shooting competition (where you had to spin around a bat 10 times before shootingぐるぐるバット). I didn’t even get to kick the ball as I fell over after spinning before even getting to the ball. ^^ It was a lot of fun, but I ended up with a few bruises – that’s how sport is!

After the sports, we went to the shared bath お風呂 (women and men separated though ^^) and it was very nice after those hours of sports. We were only two girls, so I got a chance to talk to a girl from the 4th year bachelor students who I hadn’t talked to before. Her English was pretty good – particularly the understanding – and we spoke in a mix of English and Japanese (it’s usually like that when I talk to the students ^^). In the evening, we went to a specific small Japanese style house to drink (飲み会). There were several of these small houses and they were located a bit away from the main building, so it seemed as if they were built with the purpose of housing drinking parties where people are loud. ^^ Usually the students are pretty shy about talking to me – particularly in English – but after only a few drinks they became a lot more chatty. Before this trip, I had only really talked to the 1st year master students and the PhD student, so it was nice to get a chance to get to know some of the others a bit as well. I showed some Danish drinking style to some of the guys who had started drinking whiskey. In Japan, they really like to mix whiskey and sparkling water to make “High ball”, but I said that in Denmark it’s a lot more common to drink whiskey on the rocks (only with ice). After that, we somehow ended up drinking pure whiskey shots with Danish “Skååååål” (cheers) even though that’s not really Danish style… but I guess drinking strong alcohol like that is Danish style after all. ^^ All of a sudden one of the guys who were sitting in the window disappeared (fell out)… luckily it was ground level so he was okay. After we realised he was okay, we also realised how funny it had actually looked. ^^ I think we went back to sleep around 5AM that night, and had to get up in the morning the next day to play soccer.

I was surprised at myself for actually being able to get up around 8AM and go play soccer. I can’t say I felt very good, but we were all in the same boat, so the pace of the soccer game was not very high! The rest of the people from the lab arrived around noon, and the presentations started at 1PM – everything in Japanese. I had barely slept and was a bit hung over, so it was VERY difficult staying awake during the presentations, but I didn’t fall asleep!! The Professor did though… he slept through one of the presentations from start to finish… I felt so sorry for these guys who’d worked their ass off to prepare. But oh well, at least the associate professor was watching through all presentations and asking questions every time. It was difficult for me to understand the contents of the presentations, since I couldn’t really understand what they said as I was tired and it was difficult words, but I did my best 頑張っていた! In the evening that day, the official drinking party took place and half of us were already exhausted before even starting (because of the party the day before). However, after getting a few beers and getting back into party mood again, the tiredness and hangovers were forgotten quickly.

I was seated near the professor and associate professor, and spent the first few hours talking to them. Before this, I didn’t really have much of a chance to talk to the professor before this, since he’s a busy guy, so it was nice. The bachelor students had to say something funny about their senpais in front of everyone, and even though I didn’t understand it all, it was so much fun. After the initial party, it moved into the same small house we used the day before. Here I got to talk a bit more to the professor, but also a lot to some of the bachelor students who were not there the day before. I learned about the Japanese style “drink call” songs where you sing someone’s name and then they have to finish the glass. Some of the guys even had their own special song that everyone knew. ^^ I taught them the Danish version of this type of song (e.g. “ka’ Kristine, ka’ Kristine, ka’ Kristine drikke ud”), but they couldn’t pronounce (or remember) it so it ended up just being “ka’ Kristine, ka’ Kristine, ka’ Kristine” in repeat instead. ^^ I realised one thing, which is quite different between the Japanese and Danish party style. In Denmark, you’d always have music at a party, but not in Japan. The noise level in Japan (from people) though, is much higher. ^^ But I really like the Japanese drinking party style – better than the Danish. Everyone got so drunk this day, and in particular one guy who I ended up half-carrying back to his room. Again this day, I kept partying until very late and after the party I was talking to three other guys until at least 5:30AM. I only got two hours of sleep that night. Despite this, I went to eat breakfast before going to play soccer again the next day. I was really tired, but I was not as hungover as the day before.

The drive back home that afternoon was very long. Not just because I was exhausted, but because it was during silver week (Japanese national holiday), and we were stuck in traffic jams for the whole trip. I think we took off around 2PM from Karuizawa, and I was home in my apartment around 9PM. And the trip is usually 3-4 hours! I had a hard time understanding any Japanese in the car even though I had been speaking mainly Japanese during the trip – but both my body and brain were completely exhausted. When I got back to my apartment, my boyfriend was waiting for me (he had been sleeping since he arrived ^^), and that was really nice! I didn’t have much energy though, so we just went to a convenience store to get him some food, and then shortly after I went to sleep.

During this trip I experienced so many new things and learned a lot… particularly about Japanese drinking culture… 😀 Everyone here have been so nice and welcoming, and I’m very grateful!! 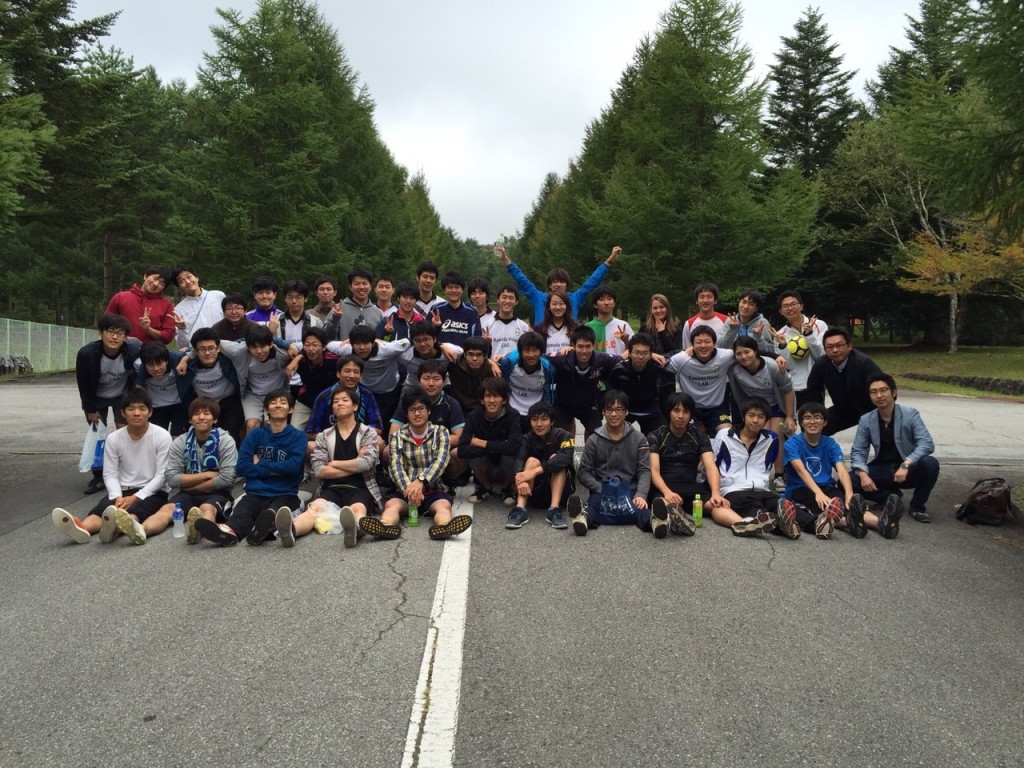