During the final part of my stay in Japan, I could not find time to write on my blog, but I experienced so many different things I will never forget. However, it would take me ages to write about everything now and I don’t know where to start. Therefore I decided not to write about them right now, but instead continue to write on my blog occasionally about things I experience or find interesting in my everyday life. Then once in a while, I might include a post about some of the things I experienced in Japan, which I did not write about so far. Today, I’ll write a bit about some of the experiences during the last few days before leaving Japan.

As the title of this post indicates, I’m back in Denmark. Many things happened since I got back, and I can’t believe that it’s only been three weeks since I came back from Japan. Coming back to Denmark after a half year in Japan included mixed feelings; there are many people in Denmark who I was really happy to see again, but there are also many people in Japan I miss very much. There are so many things I will never forget, and I never imagined to get such a nice farewell. A few days before I had to leave Japan, the people in the laboratory had planned a farewell party for me, and it was so awesome. It took place in a small restaurant which only barely could fit in everyone. When I entered the place, everyone were there, and they started clapping and rolled down a huge banner which said “クリステーン、ありがとう” (Thanks Kristine). 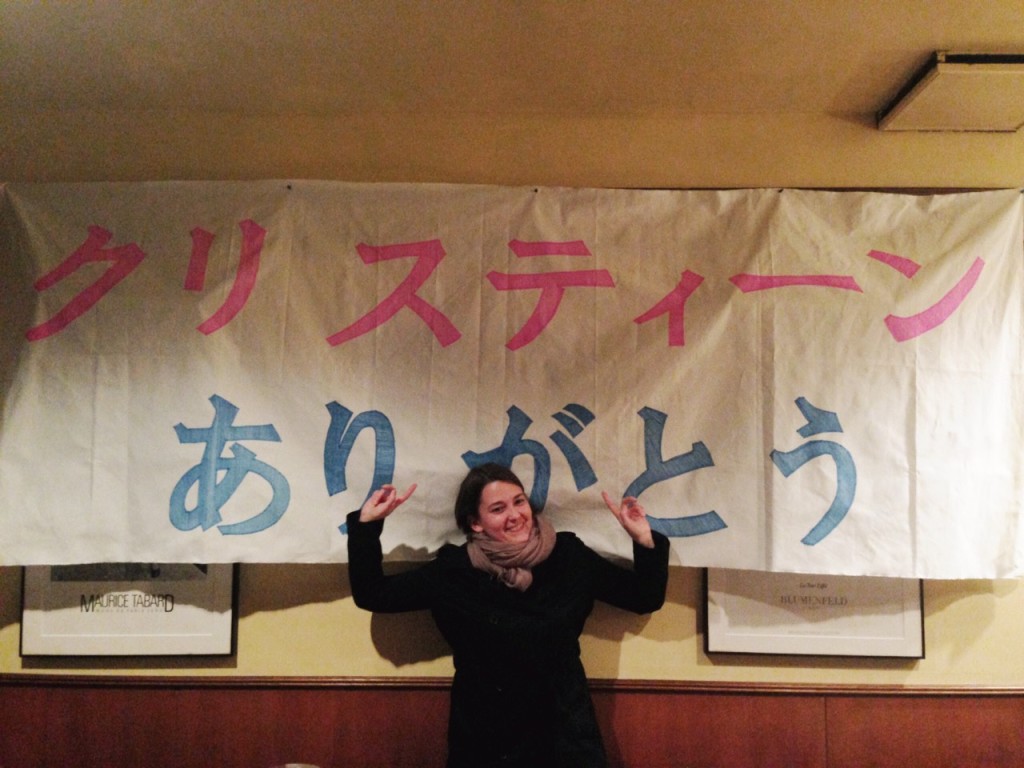 .This was followed by several speeches and they also showed images on a projector. I also got presents from everyone, and it was all much more than I could ever had wished for. From the professor, assistant professor, and the other PhD student, I received a fitbit training watch since I had been talking alot about needing to get back in shape when I got back to Denmark. 😛 It is quite neat that it can measure pulse without any need for a device around the breast. And then it even counts steps, steps on stairs and calculates calories burned. It can also tell the time ^^ 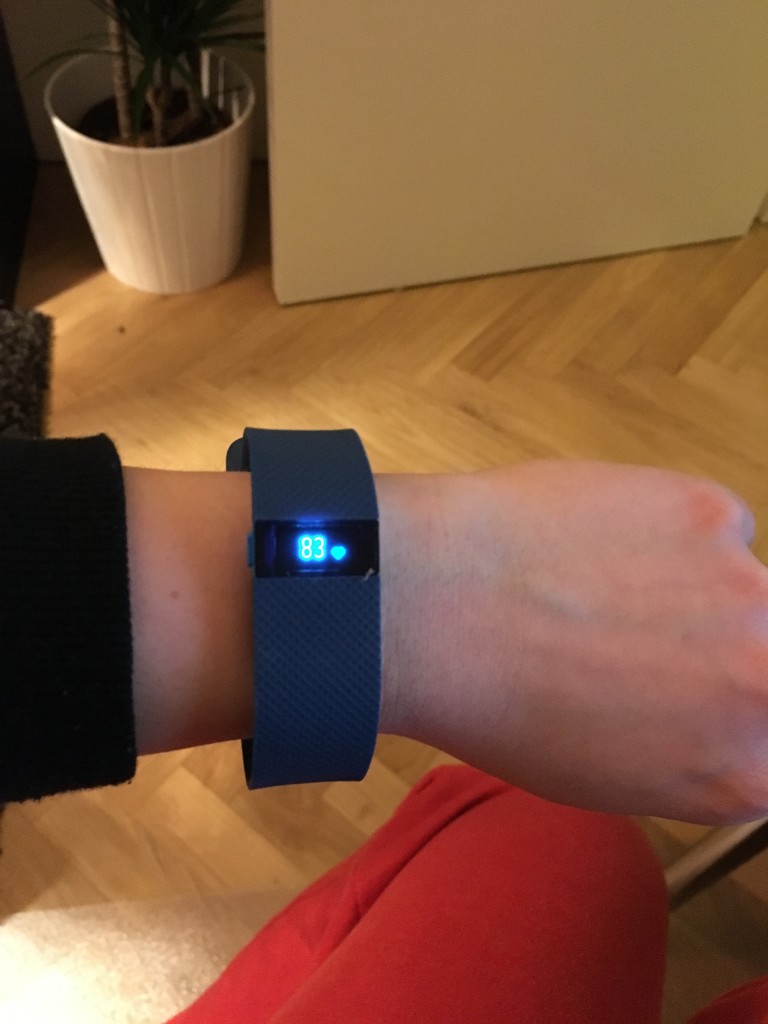 In addition, the professor gave me some very good coffee. The second year master students and the fourth year bachelor students gave me a picture frame and photo of us all. 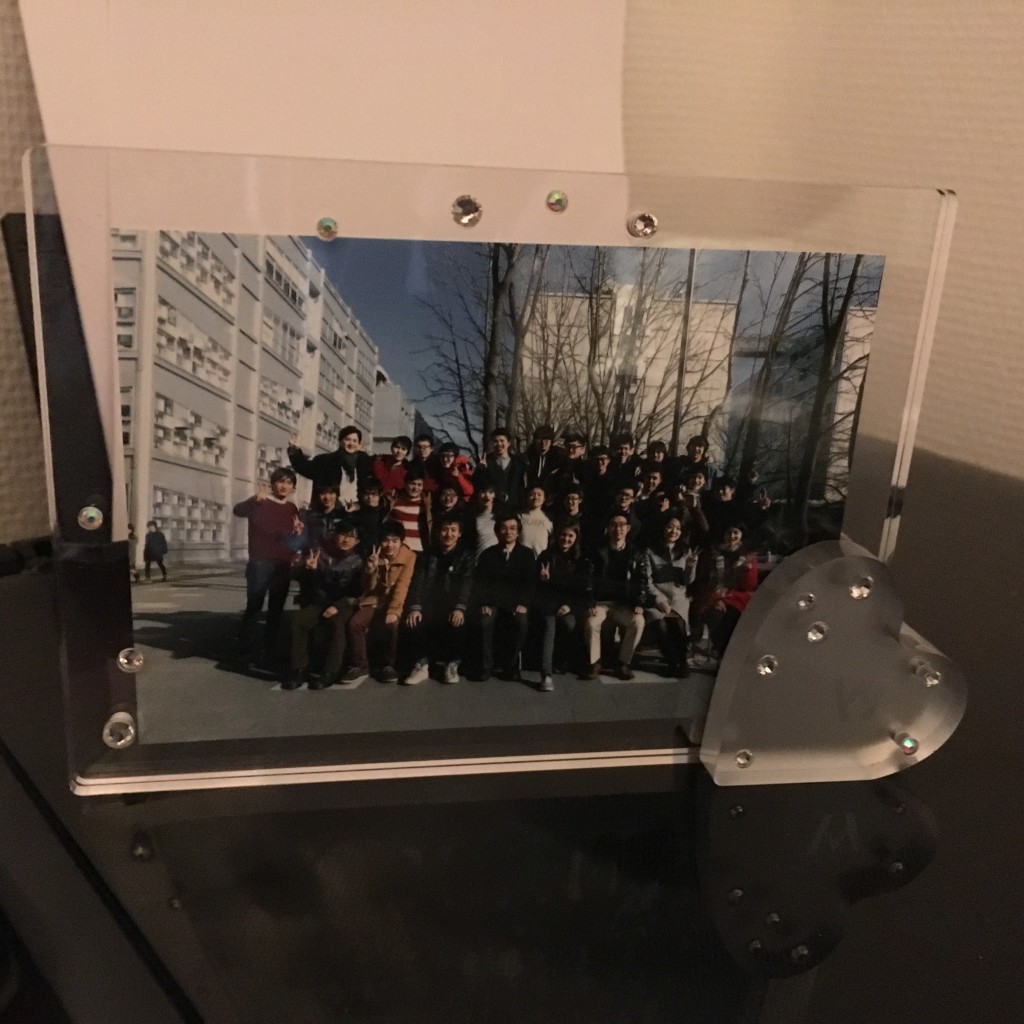 And they got my name and 川田・細井研究室 (Kawada – Hosoi Laboratory) engraved on the back of the frame. 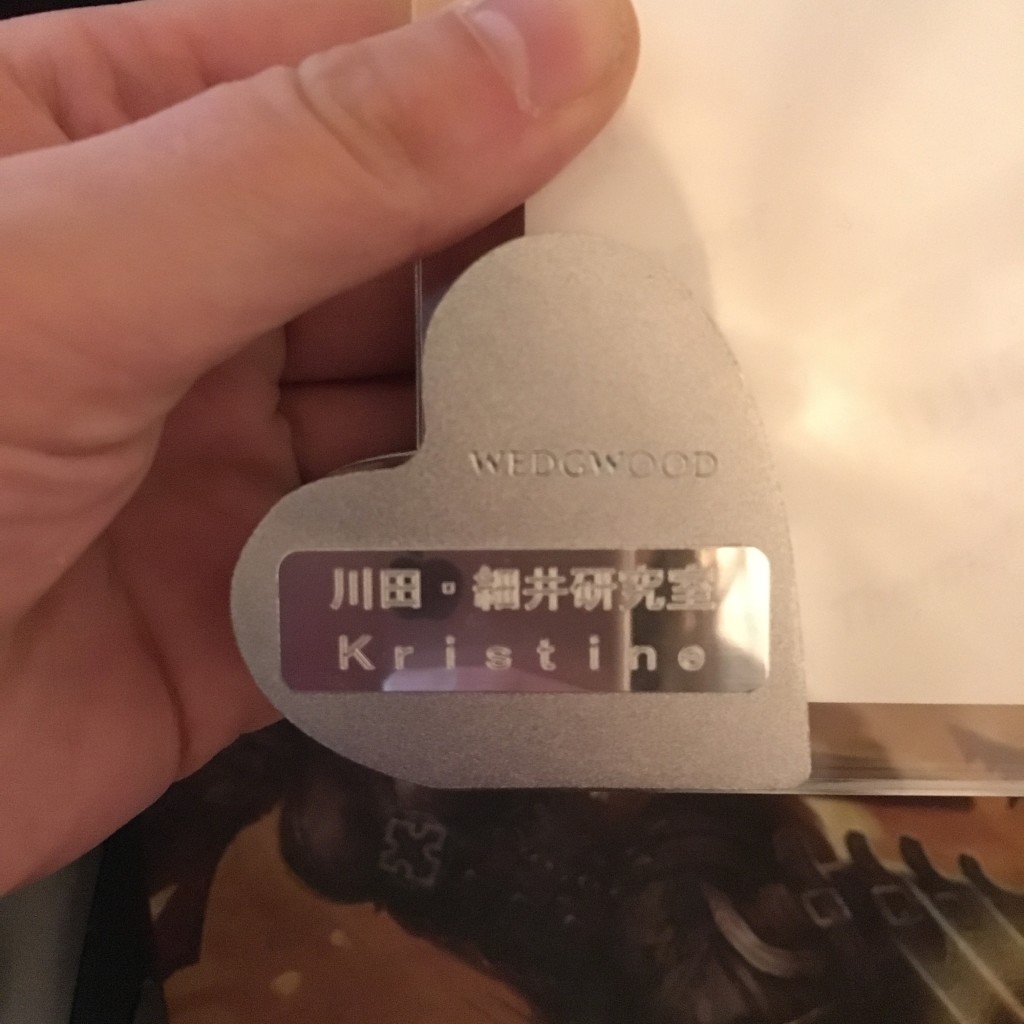 Finally, the first year master students, who I had spent most time with, had made a shirt for me with my name written in Kanji on the back along with the faces of the professors and the laboratory name. I found the pictures of the professors really funny. 😛 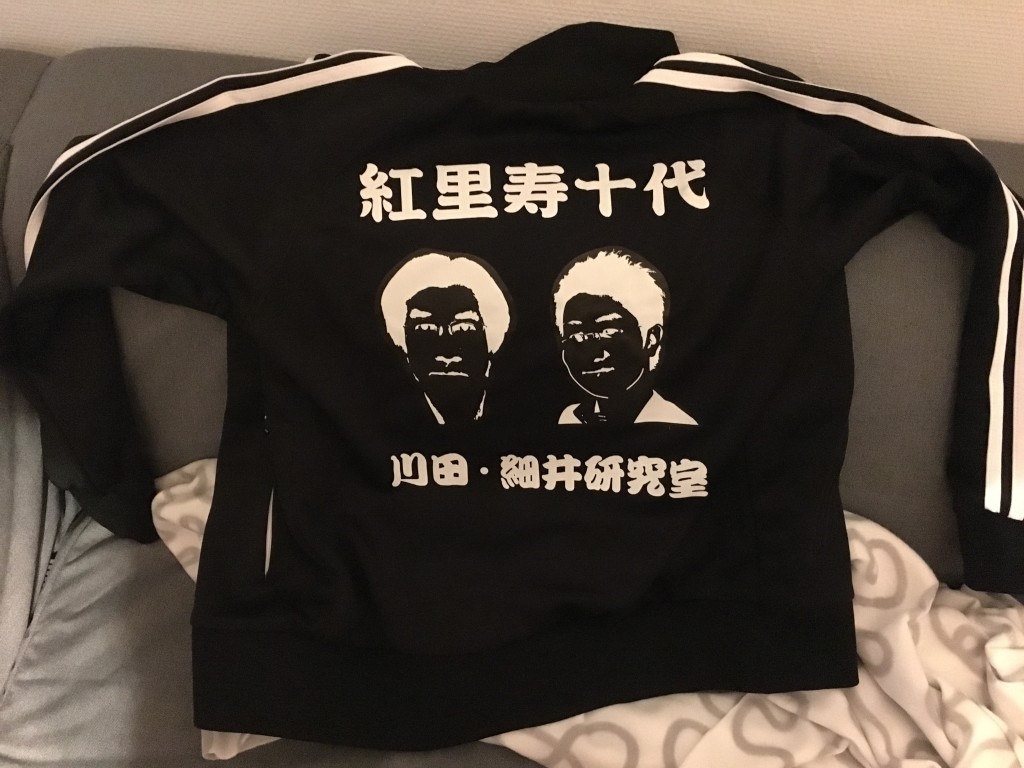 For other people, even Japanese people, it would not be obvious that the Kanji would mean “Kristine”. The first 3 kanji can actually be read “Ku, ri, su”, but the final two “十代” reads  “juudai” which means “teenage” or “teen” in English. Therefore it becomes “Kurisu-teen” with a creative mind. ^^ In addition, they had got a strain gauge printed on the front of the shirt, which generally only people with a mechanical background would know what is. 😛 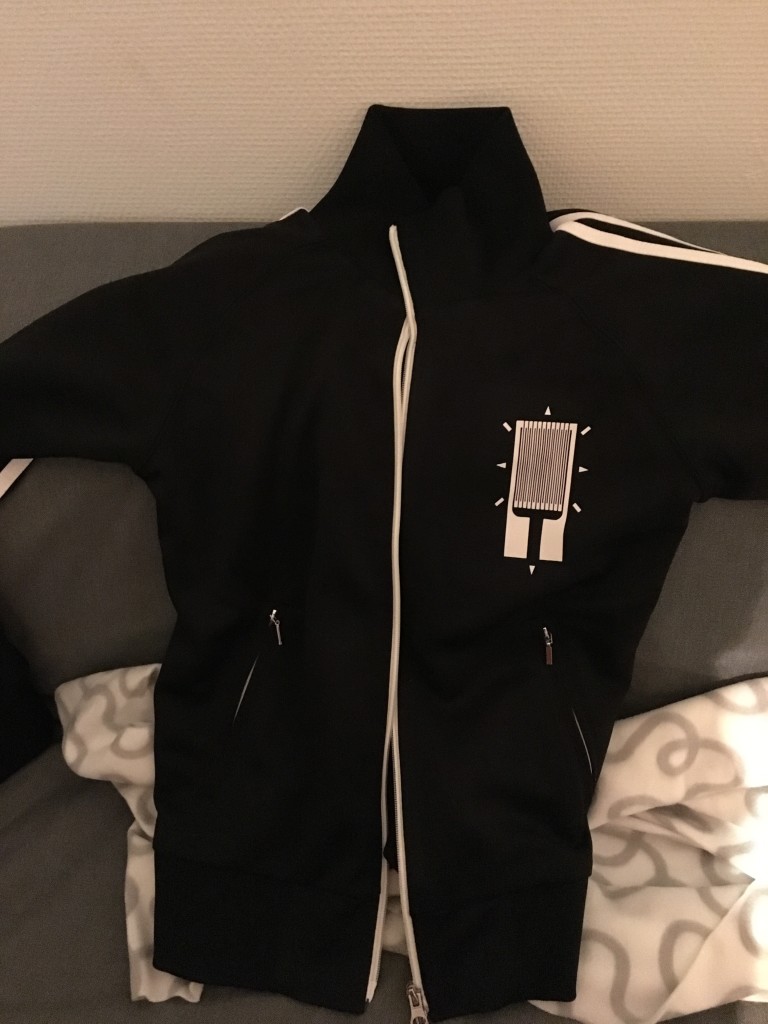 The first year master students were also the ones in charge of showing photos and a videos on the projector, and it was really awesome. They had put so much effort into it all, and I was very touched. And when I had to say the final words to close the “first party” as tradition states, the problem was not saying what I wanted in Japanese, but rather that I was not able to speak about how grateful I was without crying. The party that night went both to second, third, and forth party (in the end we were maybe 8 people left). It was an awesome evening, and I am so grateful to everyone and will treasure all the presents and memories I got forever!

On January 31st I left my apartment in Japan at 8AM in the morning after sleeping 1 hour, since finishing packing my suitcases took much longer than I expected. It was slightly chaotic in the late evening before I had to leave Japan, as I had to fit everything I wanted to bring back into three suitcases, and I simply bought too much… 😛 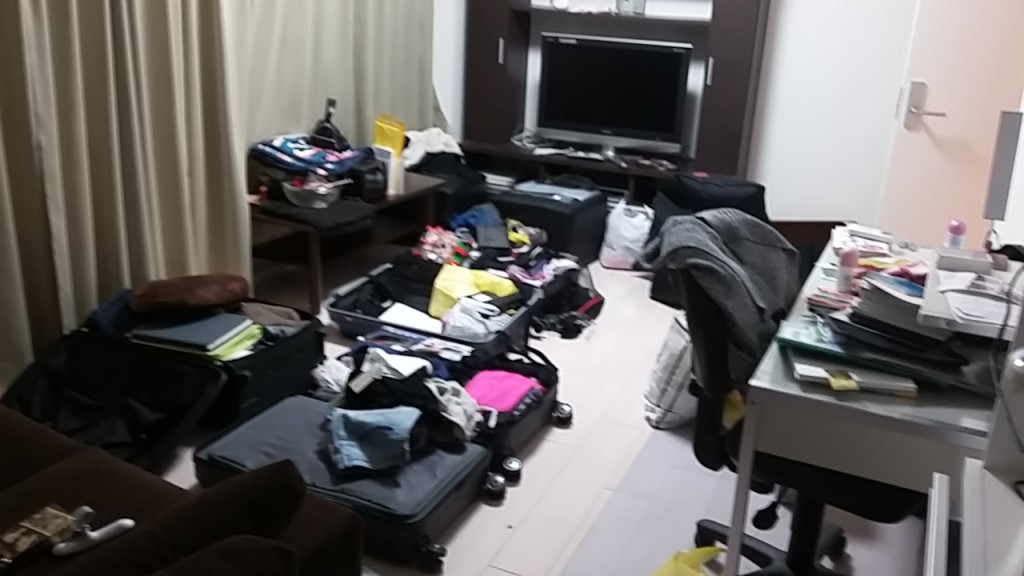 In the morning, two of the students from the laboratory helped me with the suitcases in the train to the airport. Some other students joined us on the way, and a few more met us in the airport. In the end, 8 people were there in the airport to see me off. 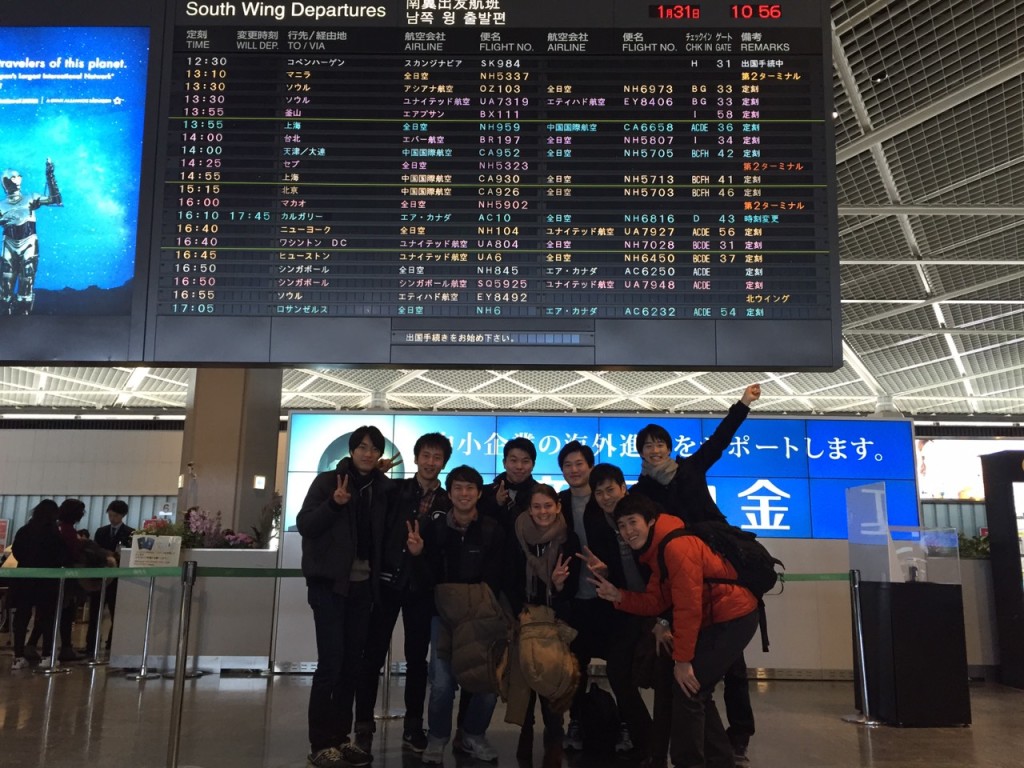 They did not stop watching me and waving until they could absolutely not see me anymore. I was so happy they came to see me off! But it was difficult for me not to cry when waving while going out of their sight. And during the whole 11 hour flight I was tearing up several times and could not focus on watching any movies or anything since the only thing going around in my head was that I wouldn’t be able to see everyone for a very long time, and that those days would never come back. I didn’t know I was able to be such a crybaby. 😛 But during the last days in Japan, I really realised how much I had come to love Japan and all the people I met there.

However, after being back for a while in Denmark and having my mind filled with other things, I decided that I would focus on remembering all the good memories, and try not to think about what I’m not able to do now. I am extremely grateful to everyone for giving me so many awesome memories, and no matter what will happen from now on I will never ever forget them. With that in mind, I decided to gather and print out photos, and dedicate a wall in my room to hanging them up. 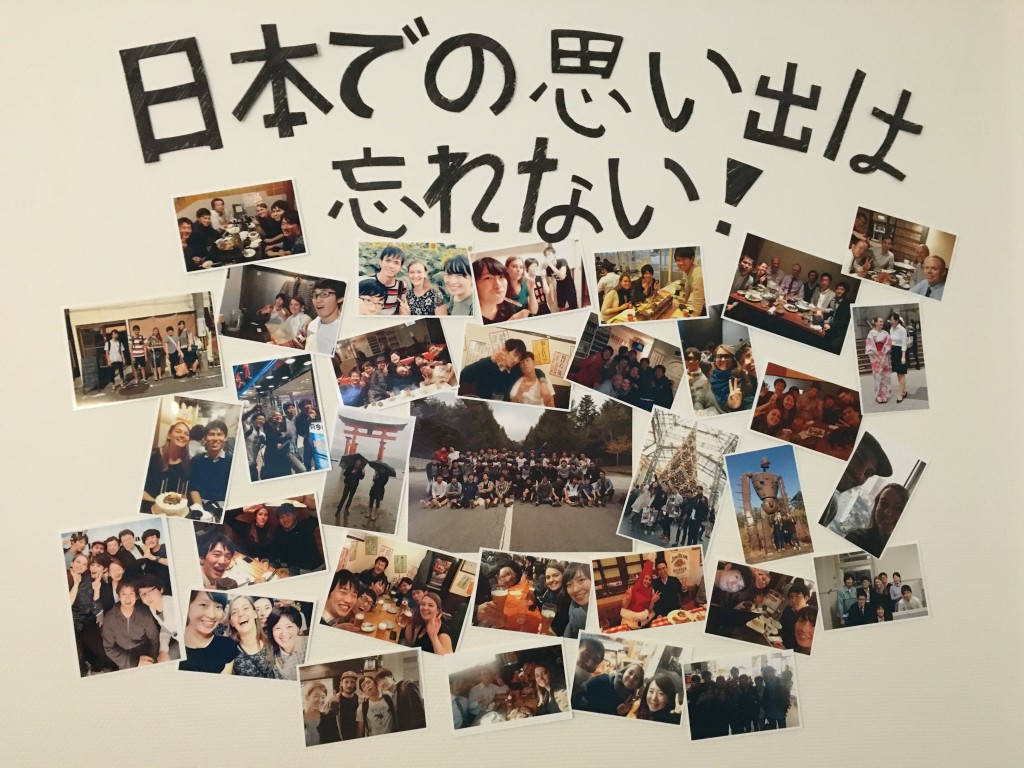 The text says “日本での思い出は忘れない！” (Nihon de no omoide wa wasurenai) and  means “I will not forget the memories from Japan”. I still need to print out a few more photos, but I’m pretty happy with the result. ^^

With that, I will end this post! See you! またね！