Sorry, it’s been a while since I last wrote on my blog (again), and that means that I have fallen even further behind with posts I want to write. The next story in line is about a trip to Kusatsu Onsen located in the Gunma prefecture north west of Tokyo, housing one of the best and most famous natural hot springs in Japan. When arriving to the town, the first sight is quite impressive. 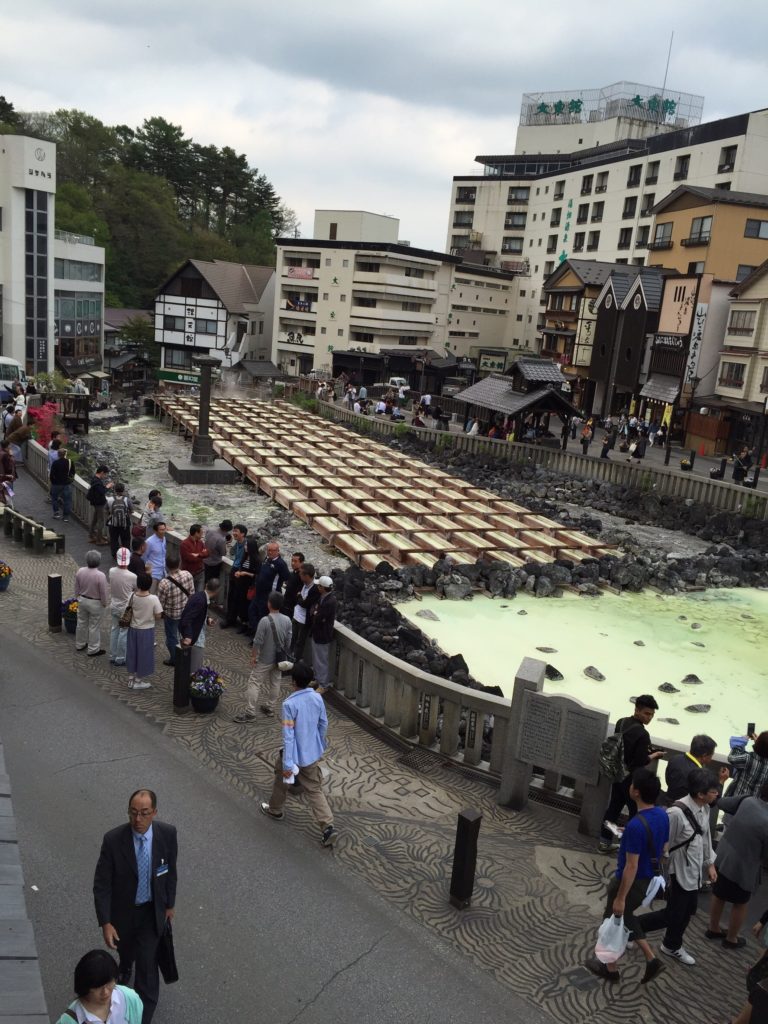 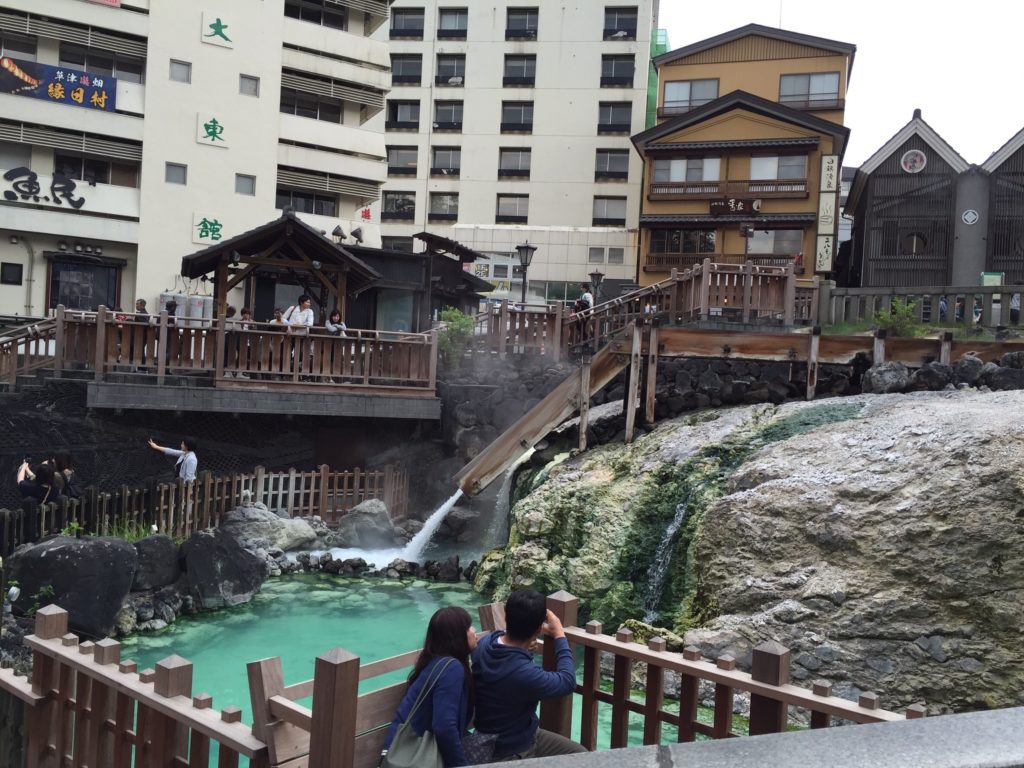 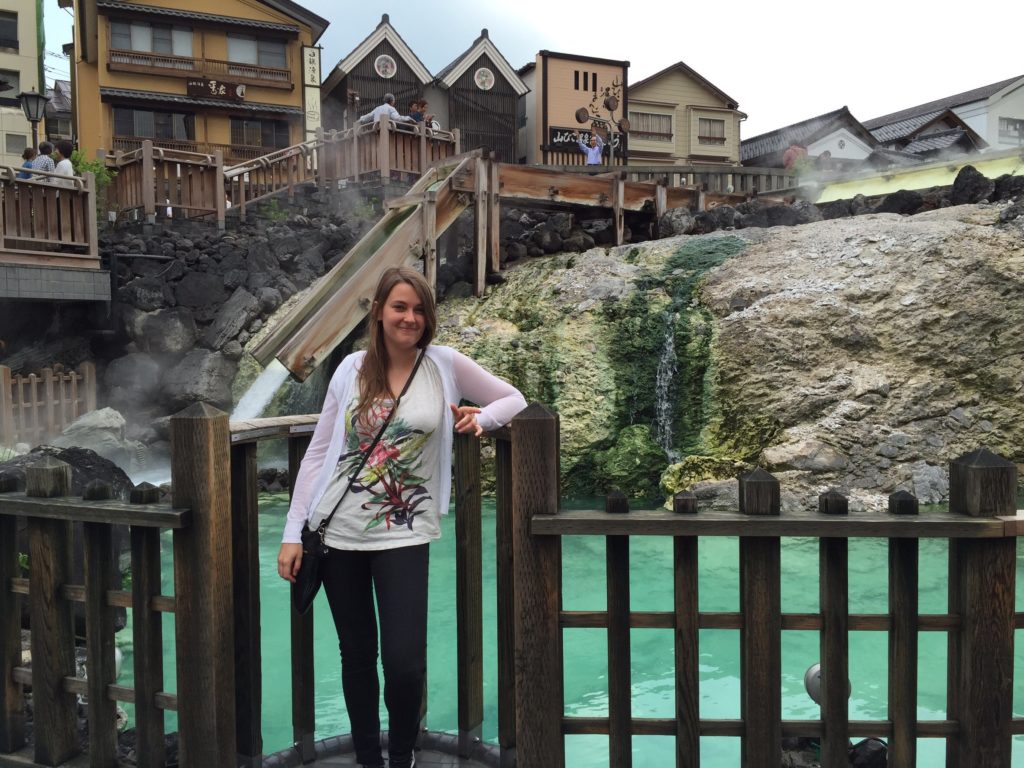 Approaching this green water, one finds the characteristic onsen smell, which most people from the west probably would group somewhere near rotten eggs, however to Japanese people it is not a bad smell.  Rather, it is a  good smell – the smell of onsen (although here it is strong). This arrangement in which the onsen water flows has two main purposes; one is to pick up some kind of minerals from the water, and another is to cool the water to a temperature where you can bathe in it without getting boiled. They also did a show where they demonstrated the old school way of cooling the water which was done by women singing and at the same time stirring and splashing the water using large pieces of wood. 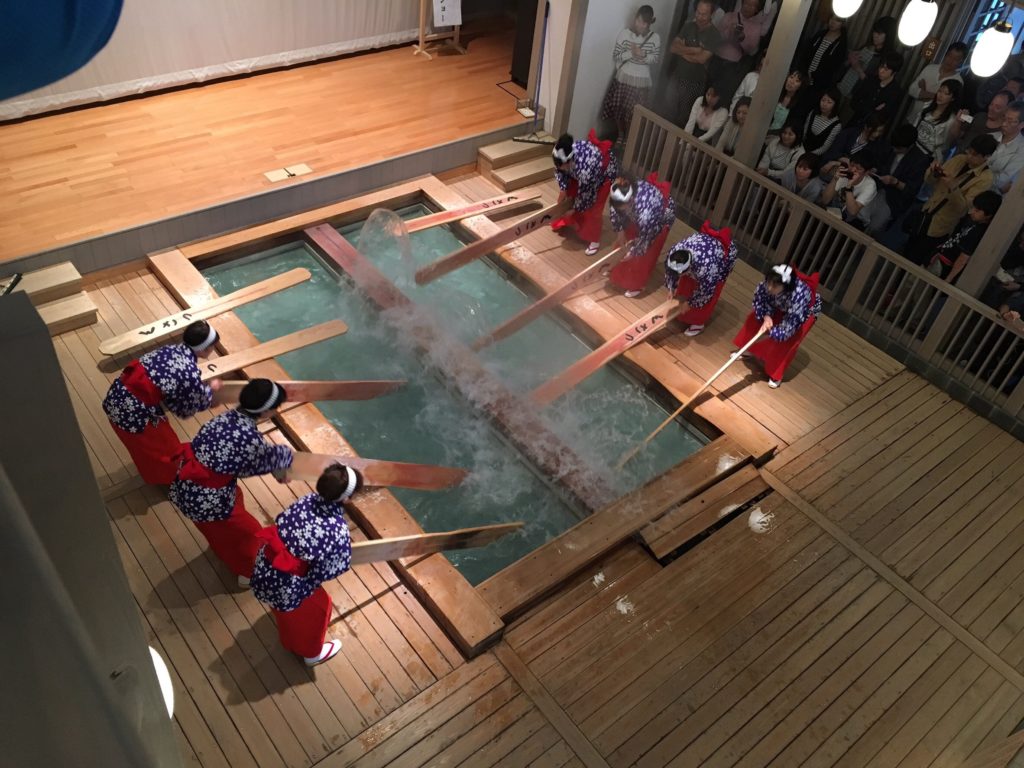 After their demonstration, people could go and try it themselves, and in the end the women did a show where they danced. It was quite interesting. 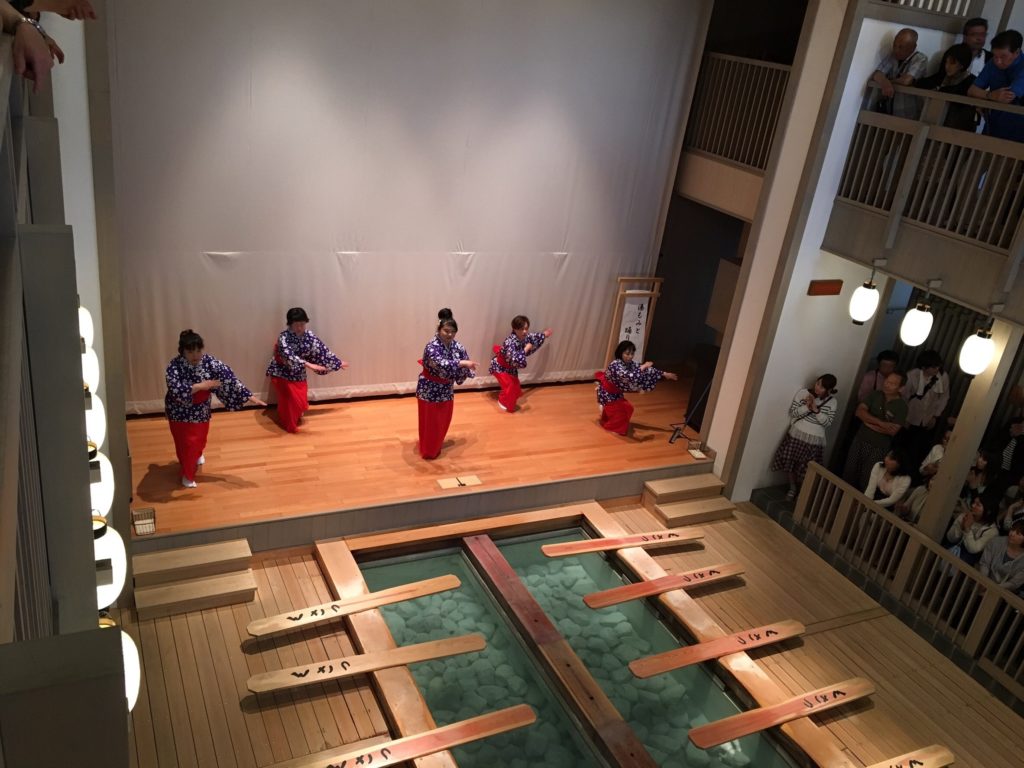 Walking just a little bit away from the center of the town, there’s some really pretty landscape and hot onsen water running in streams. There are also footbaths free to use. 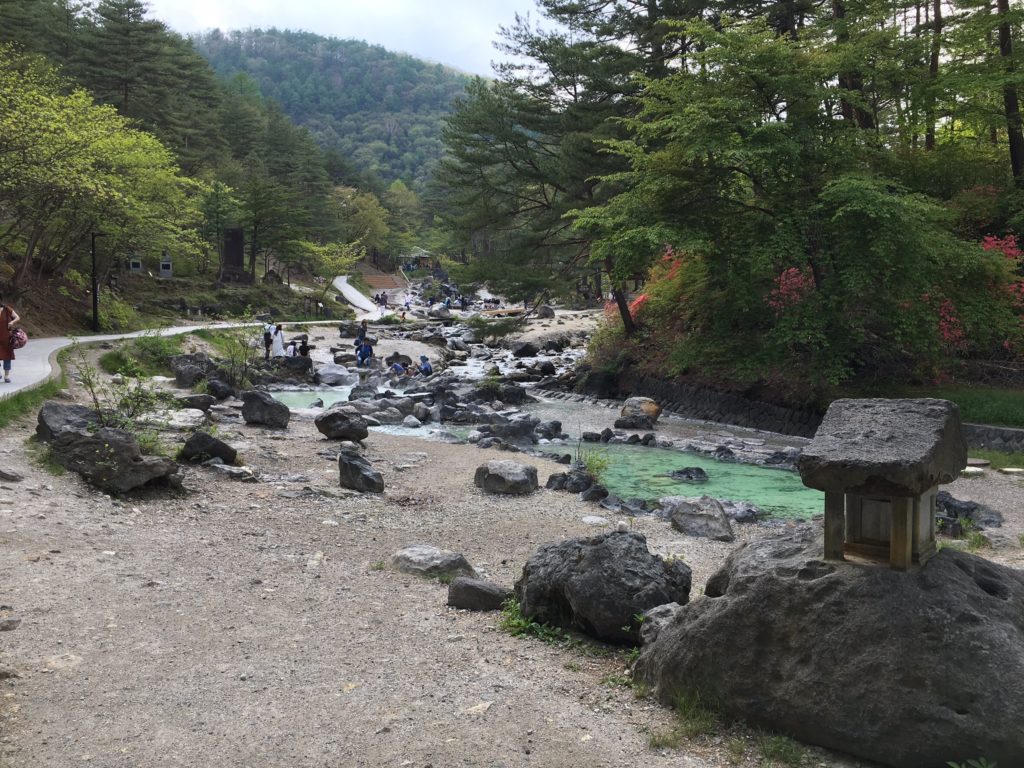 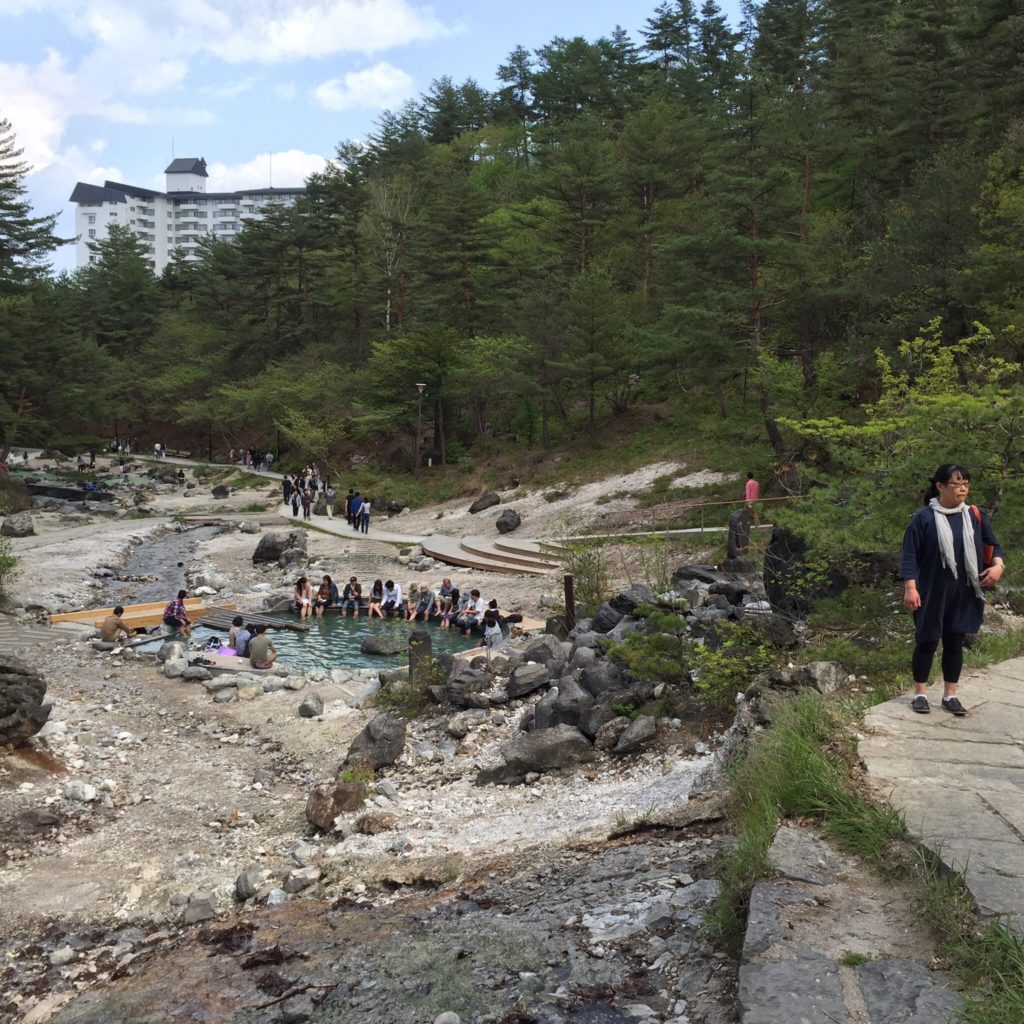 I have seen many pretty flowers and landscapes in Japan, but I really loved the colors of the flowers here. For some reason, I was particularly enchanted by one type of flower with a light red/orange color (laksefarvet). But I don’t think the photos at all capture its actual awesomeness. 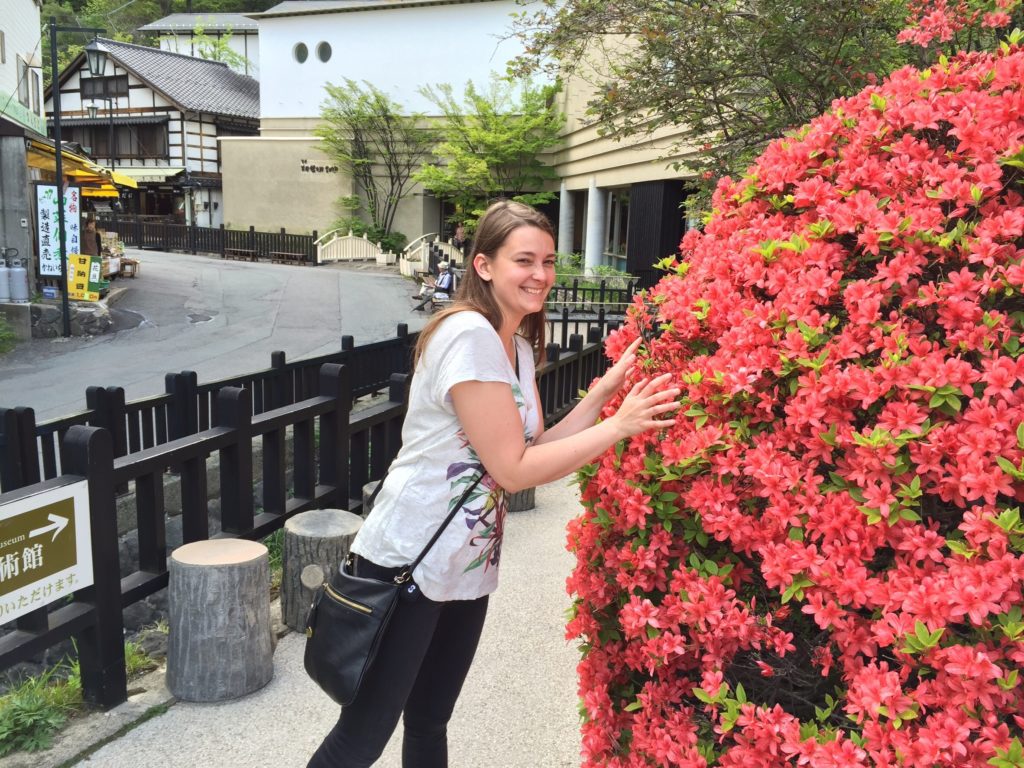 Between the town center and the foot spa place, they were handing out freshly made manjuu and green tea as a sells method to get people to buy a box of them. These are soft buns with sweet bean paste in the center, and recently I don’t think they are bad. However, I did not intend to buy a box of those at that time. But there was this elderly, very talkative man who asked where I was from and even started out in English even though he definitely did not speak English. ^^ I told him that I am from Denmark and that I’d consider buying a box of manjuu and come back later. When we then passed again later, he immidiately remembered, however he got the country completely wrong. I think he said portugal or something. ^^; After telling him that it actually was Denmark (not expecting him to remember) we asked for advice to a good soba restaurant which wasn’t crowded (soba is the speciality of many different places in Japan, but to be honest I can rarely taste much difference ^^). He suggested the shop just next to their own that was a bit hidden and the entrance was difficult to see. Even though we were thinking that maybe it was a friend of his rather than it being particularly good, we took the advice and it was quite good (walnut soba) and we did not have to wait in line which also was a big plus at that time. 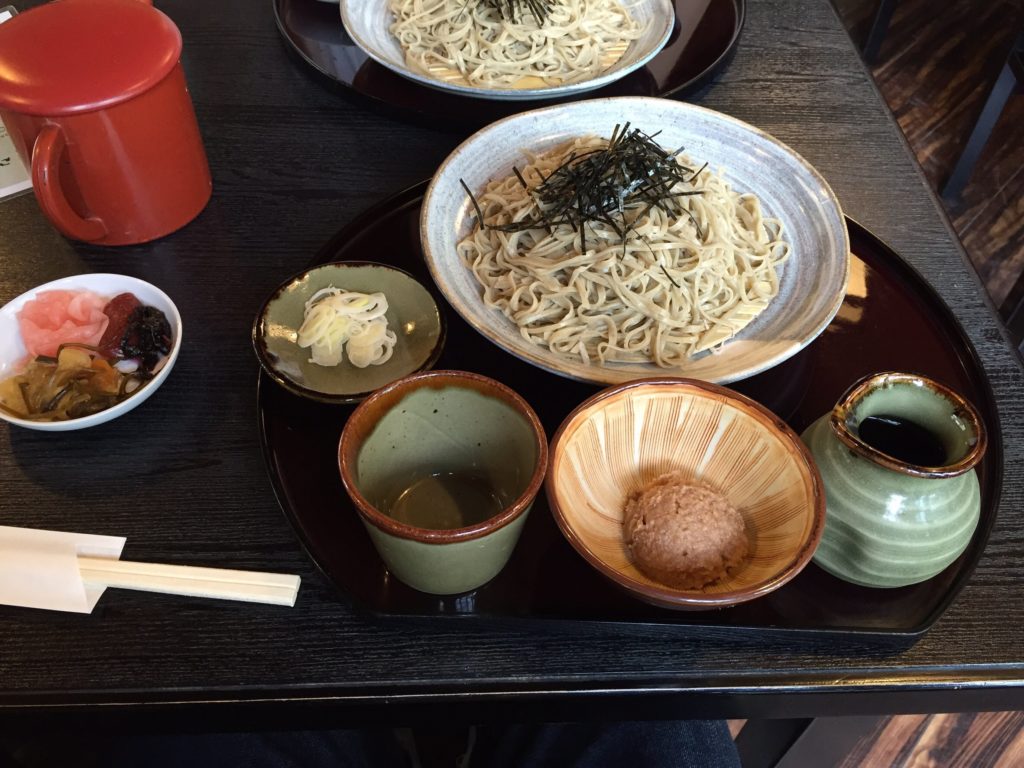 The next day when we passed the same place again, he was there again and this time remembered that I was from Denmark (and we got more free freshmade manjuu). So even though these buns with bean paste inside are not my favorite snack, I couldn’t help buying a small pack of them to support their business. ^^ 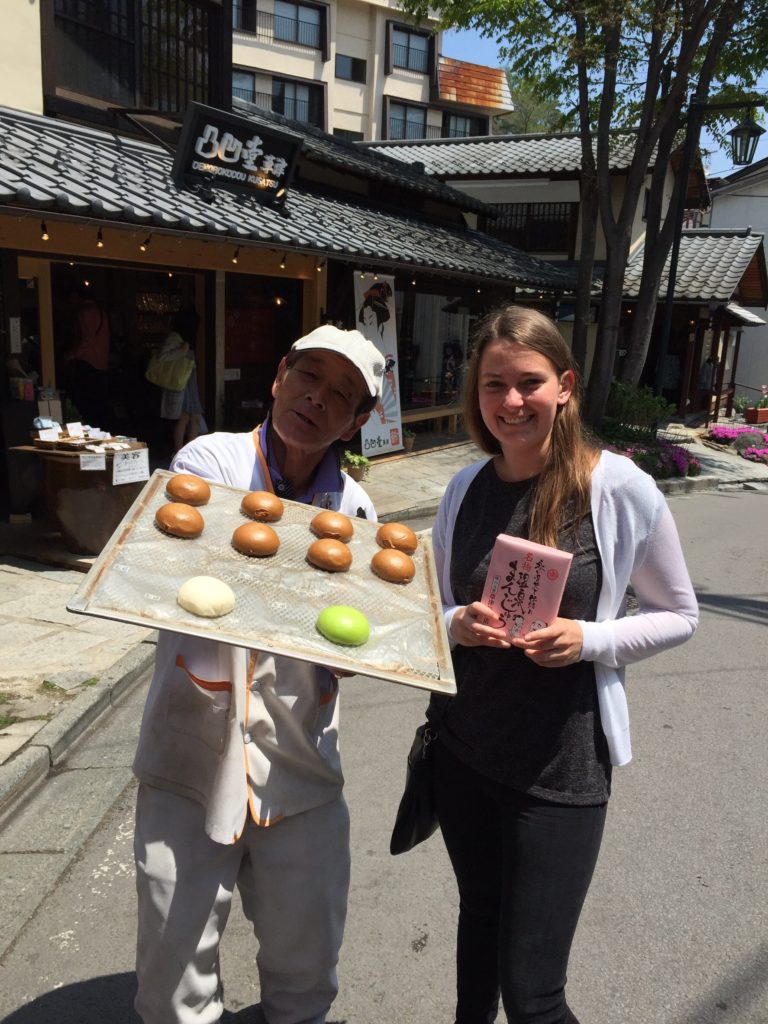 In the beginning of day two, we had not decided on where to go yet. The nearby mountain is one of the popular sightseeing spots, however because of danger of volcano erruption it was not possible to stop at a famous lake close to the top. Therefore, we had initially given up on going there. However, if going by car it was possible to drive through – only you were not allowed to stop. So in the end we rented a car and drove up into the mountain. And I’m very glad we did, since the part where stopping was not allowed was not so long and there were amazing views at several places. 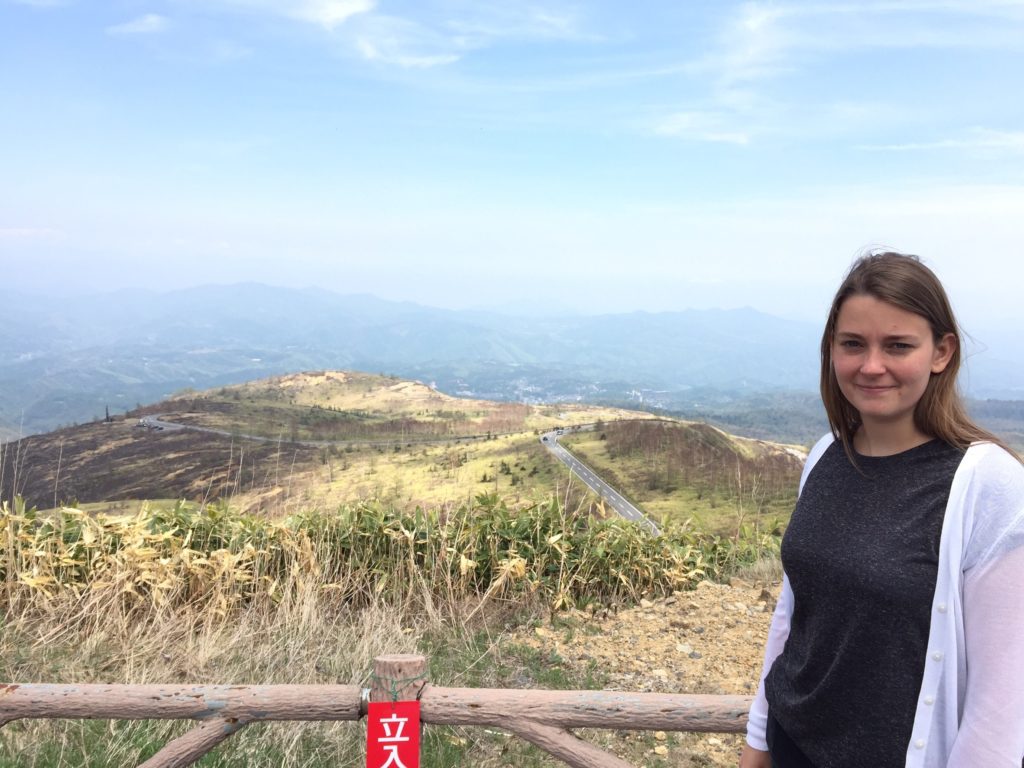 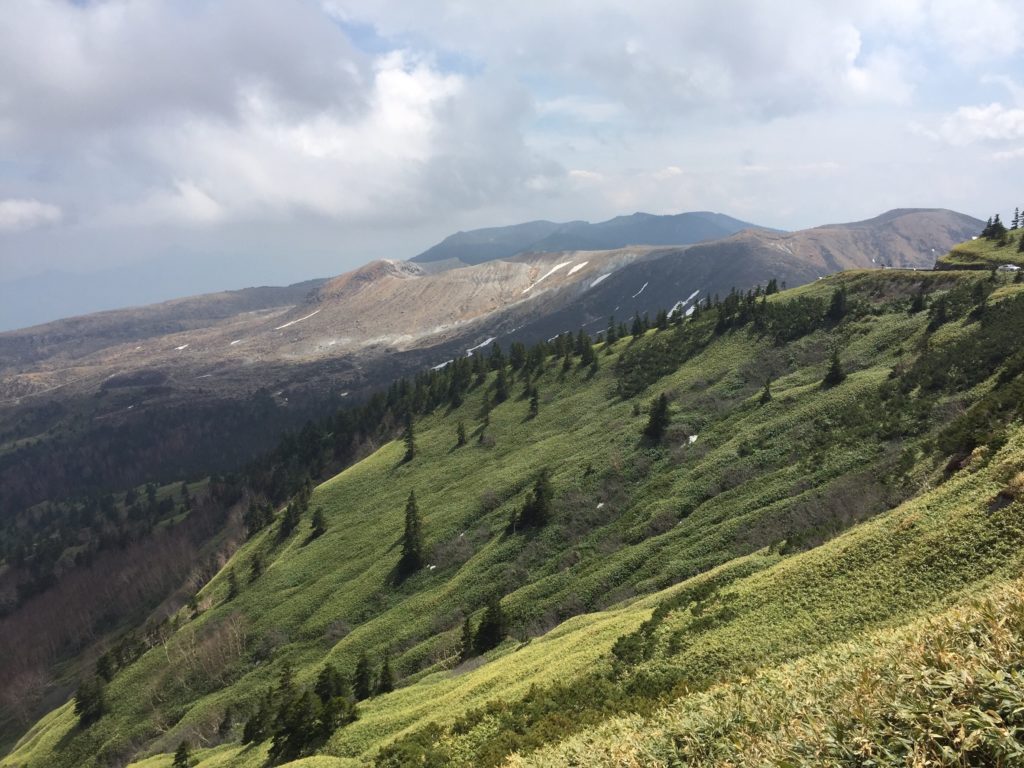 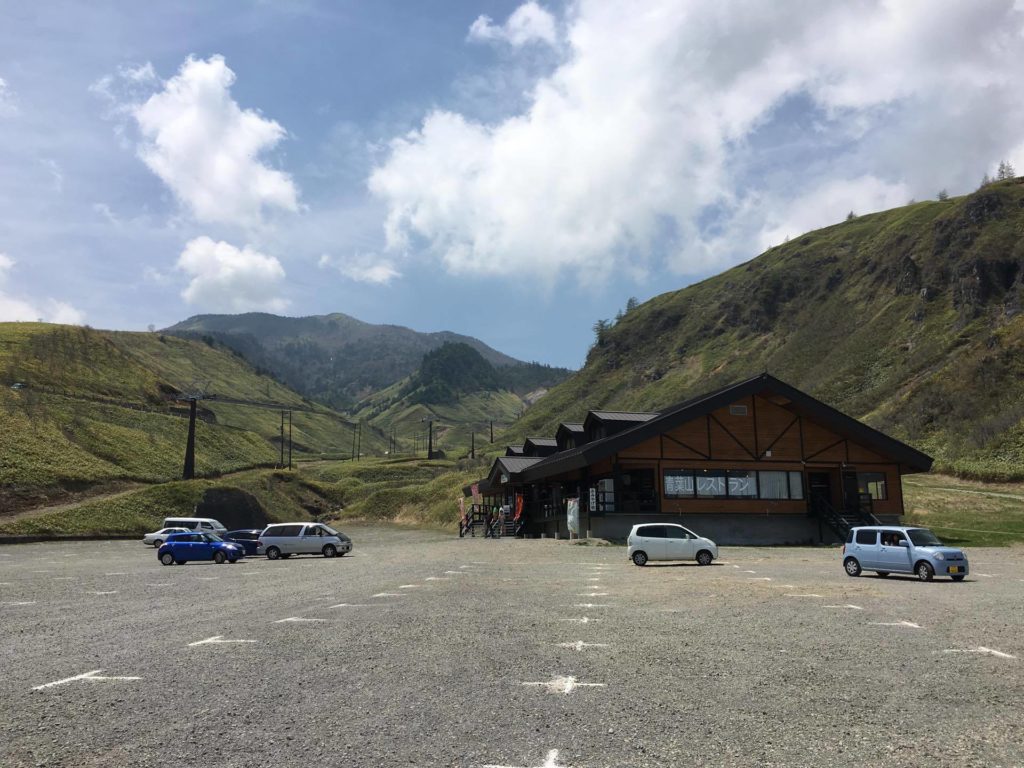 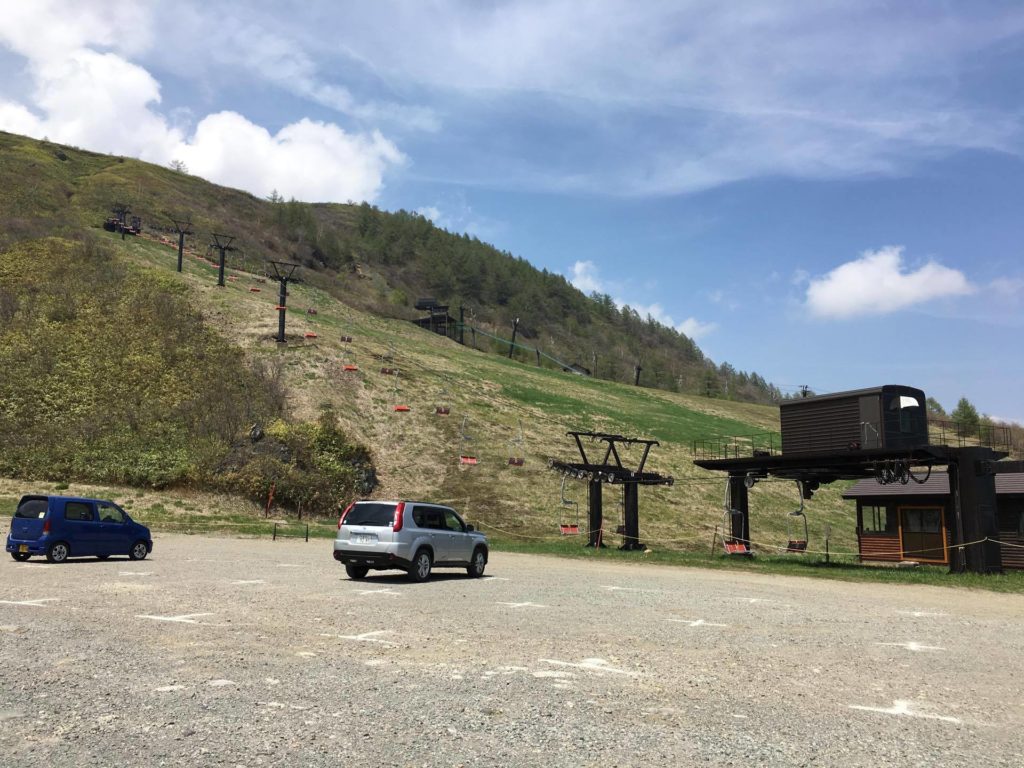 And this particular mountain had the highest point where cars can drive in Japan. 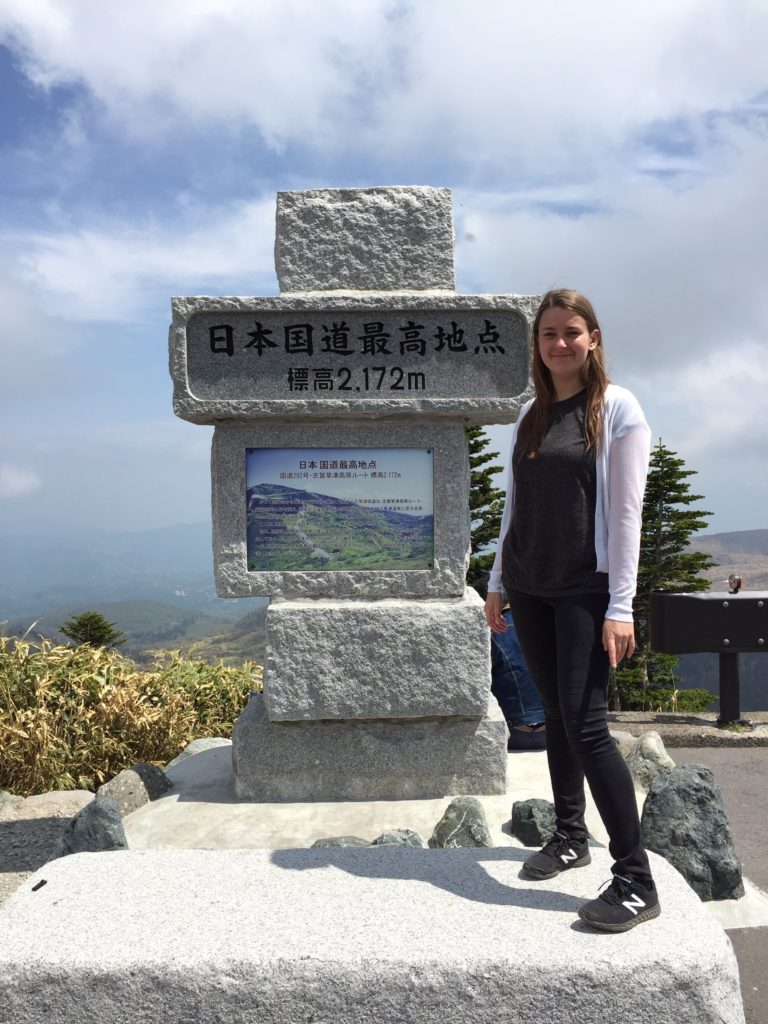 From which the view of course was amazing! 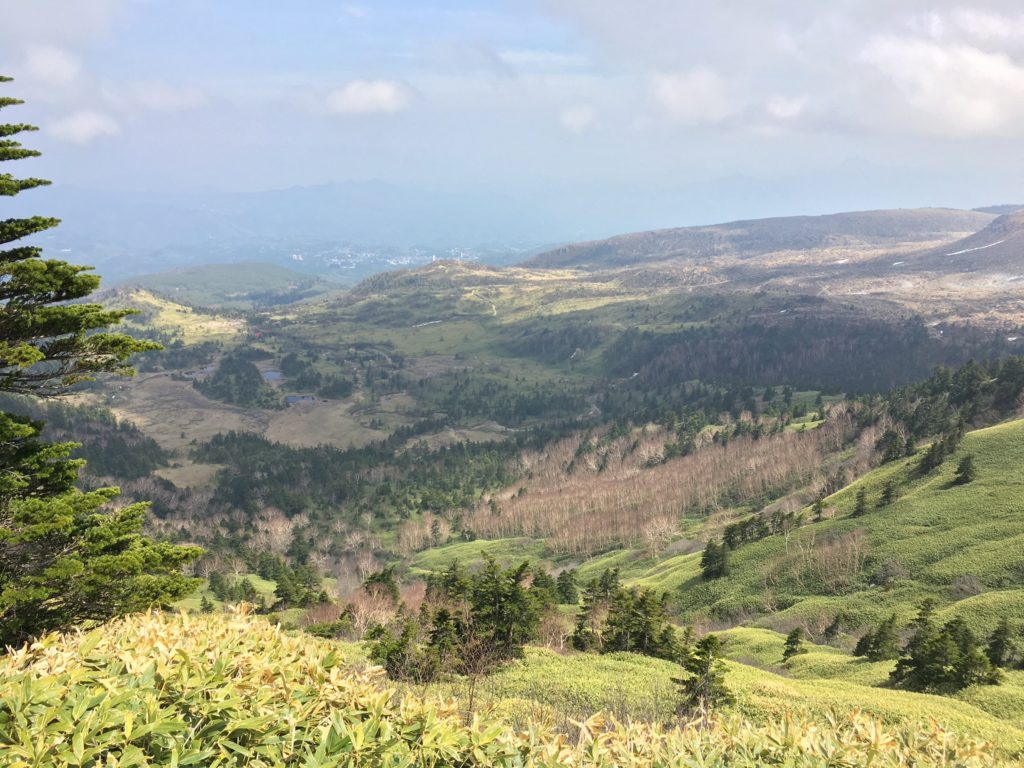 In general Kusatsu Onsen and nearby was a very nice and relaxing place, and I can definitely recommend to spend a day or two there. And that was what I had to say about Kusatsu! See you next time.