As I wrote about in my last post, I had decided to try to make a Danish Christmas dinner in Japan this year, and most parts went well. Well, I managed to catch a cold less than a week before Christmas and lie in bed for three days, which left me with less time than planned. Then I also managed to infect Motoki leaving him bedbound with fever for a few days as well. However, in the end we both were feeling somewhat OK on Christmas eve, so in that sense we were lucky with the timing.

There were many things I wasn’t sure whether would work out well – especially with the desert – so I started cooking in the evening on the 23rd. One thing was, that I was planning on using normal Japanese rice to make “Risengrød” as they are quite similar to the Danish porridge rice (grødris), and I was not sure whether it would work out or not. I followed a Danish recipe with the amounts of rice to milk along with the boiling time, and surprisingly they worked exactly like the Danish porridge rice and tasted just as it should. 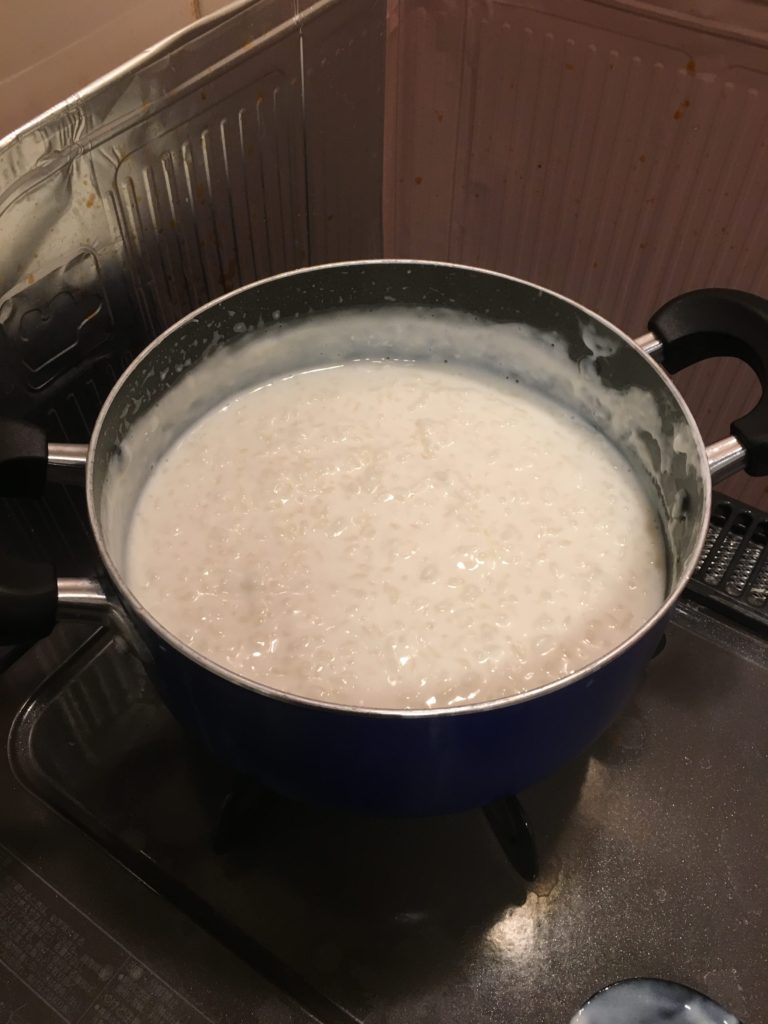 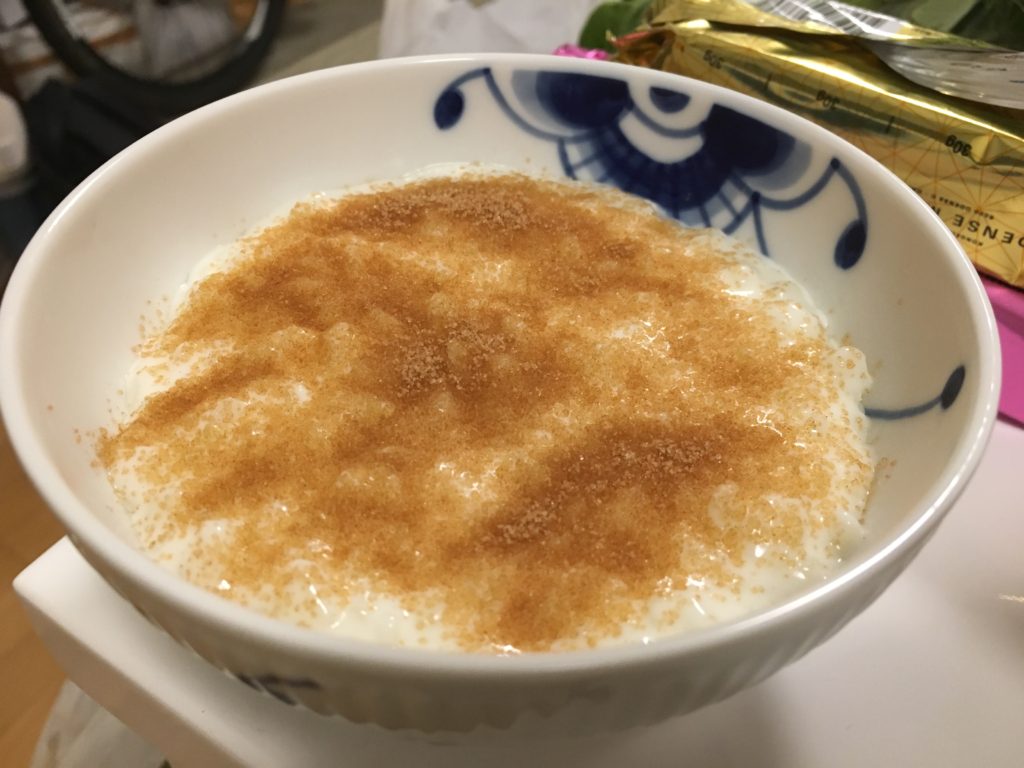 I had also been struggling with finding ingredients for the dinner and especially vanilla beans and not essence. In addition, I had gone to the supermarket to buy almonds for the “Risalamande” desert, and I didn’t even consider the possibility that the almonds normally sold in Japan were roasted… But after coming home and starting to remove the peels, I realised something was wrong with their color… 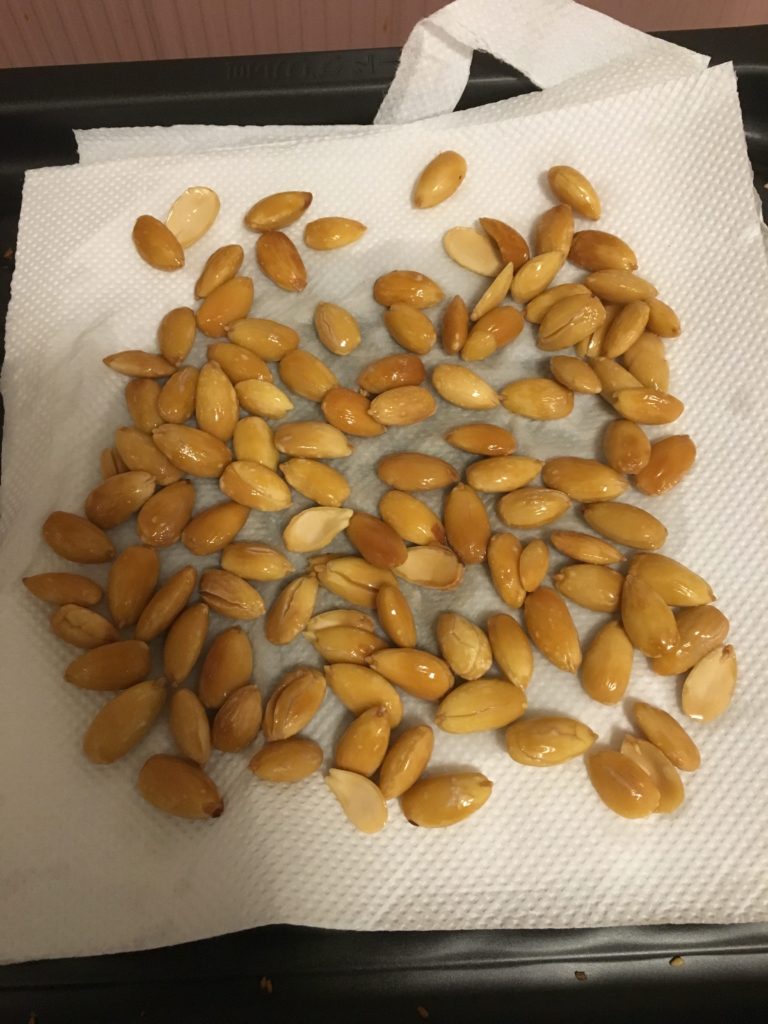 And after tasting them, I knew I had to find almonds in another place and was panicking a bit. After googling a bit, I found out that there is a specialty store called Tomiz selling stuff particularly for baking in the basement of Omiya station. Here I could both find vanilla, raw almonds and walnuts along with a lot of other interesting stuff, so that was great. So in the end, we managed to buy all the stuff necessary to cook the dinner. 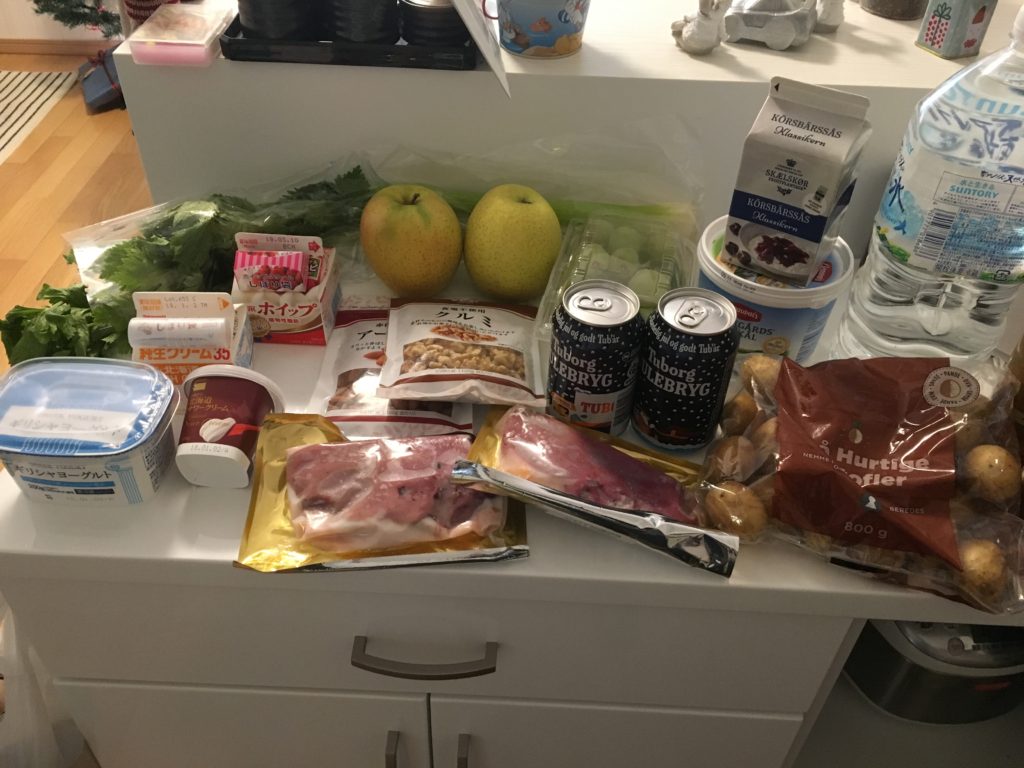 My mom had been nice to send me potatoes from Denmark along with red cabbage and cherry sauce. Therefore the remaining challenges were only the duck meat and the Waldorf Salad. We had bought duck breast meat in a big supermarket some days before, so that was already settled. The Waldorf Salad uses “creme fraiche”, which I haven’t been able to find in Japan. However, I had read that although not as good, “sour cream” could be used as a substitute. I mixed the sour cream with a bit of Greek yogurt as a replacement to the creme fraiche and it worked out great. 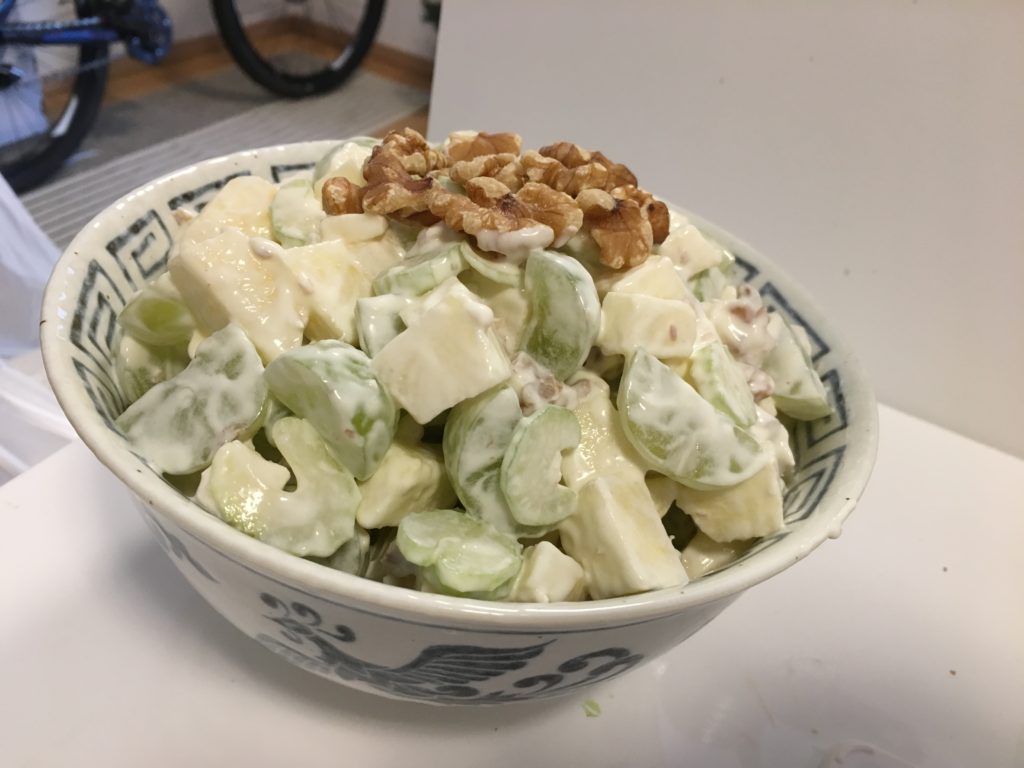 In the end, I managed to cook the things I wanted and decorate the room and table accordingly. 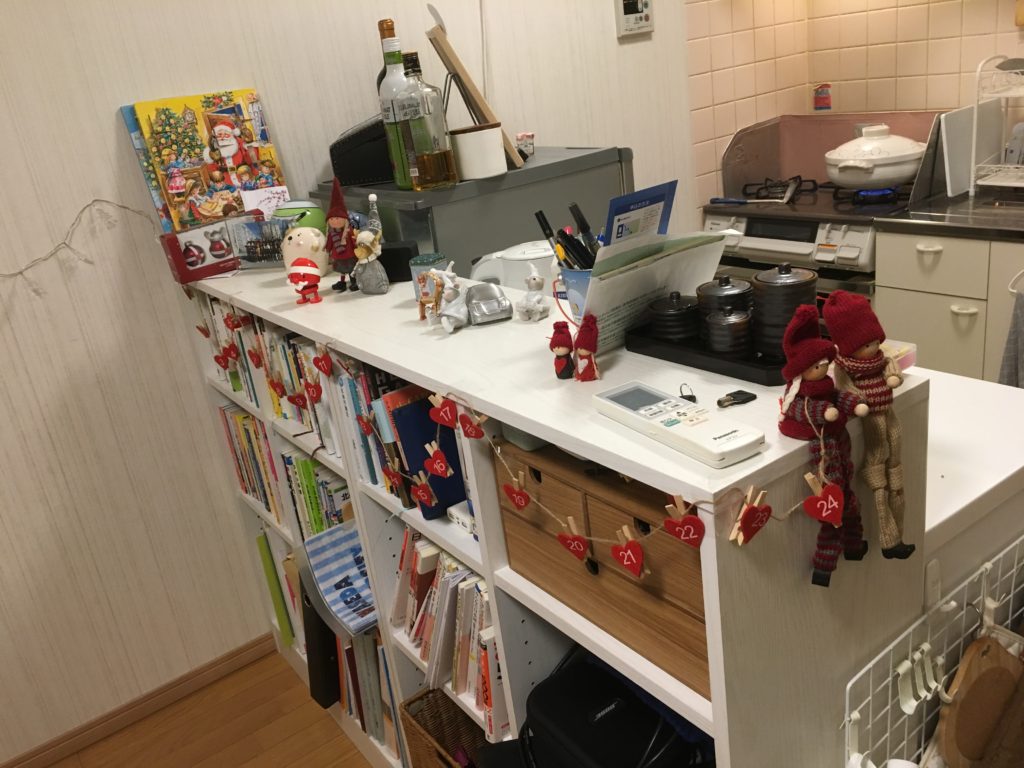 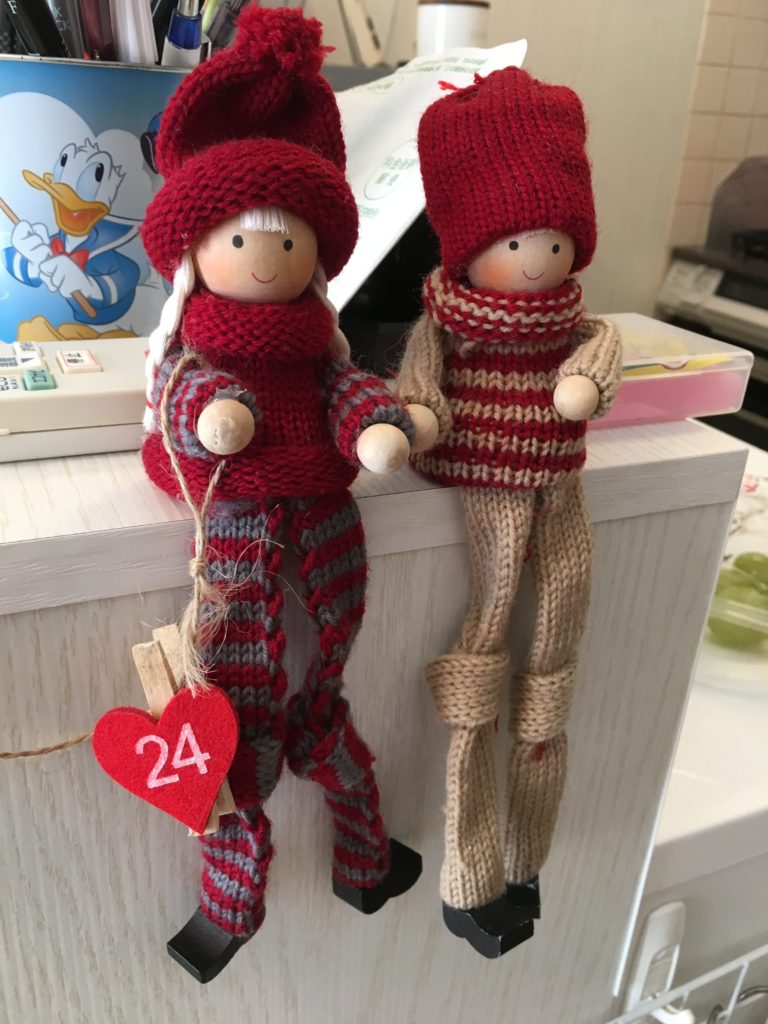 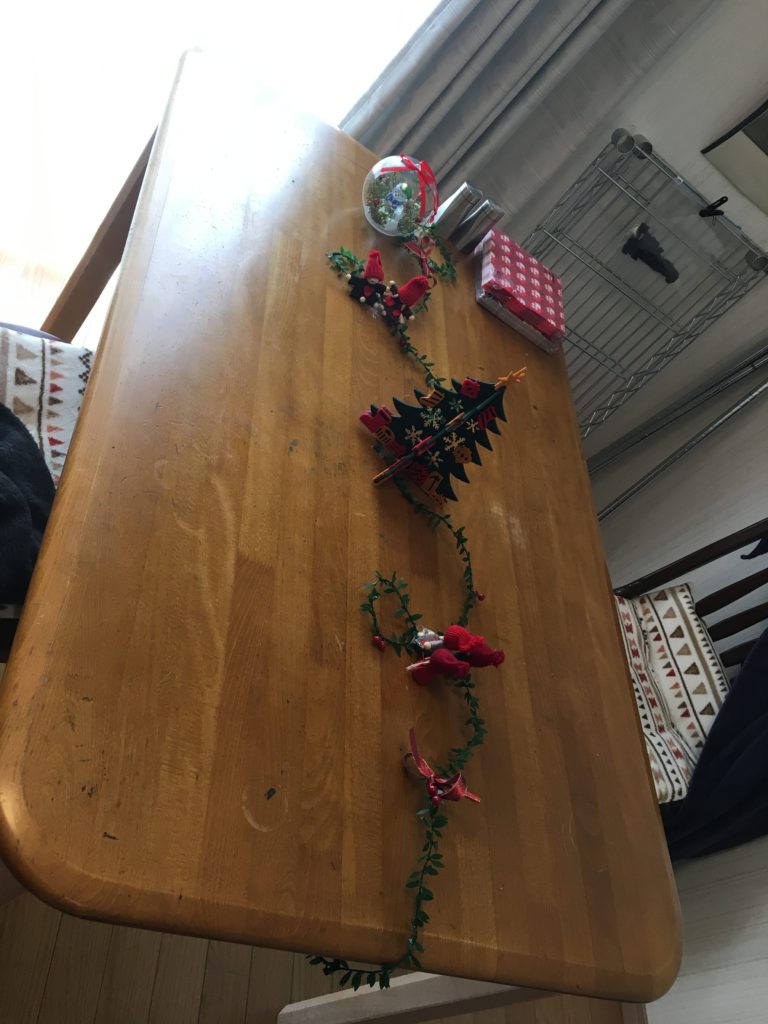 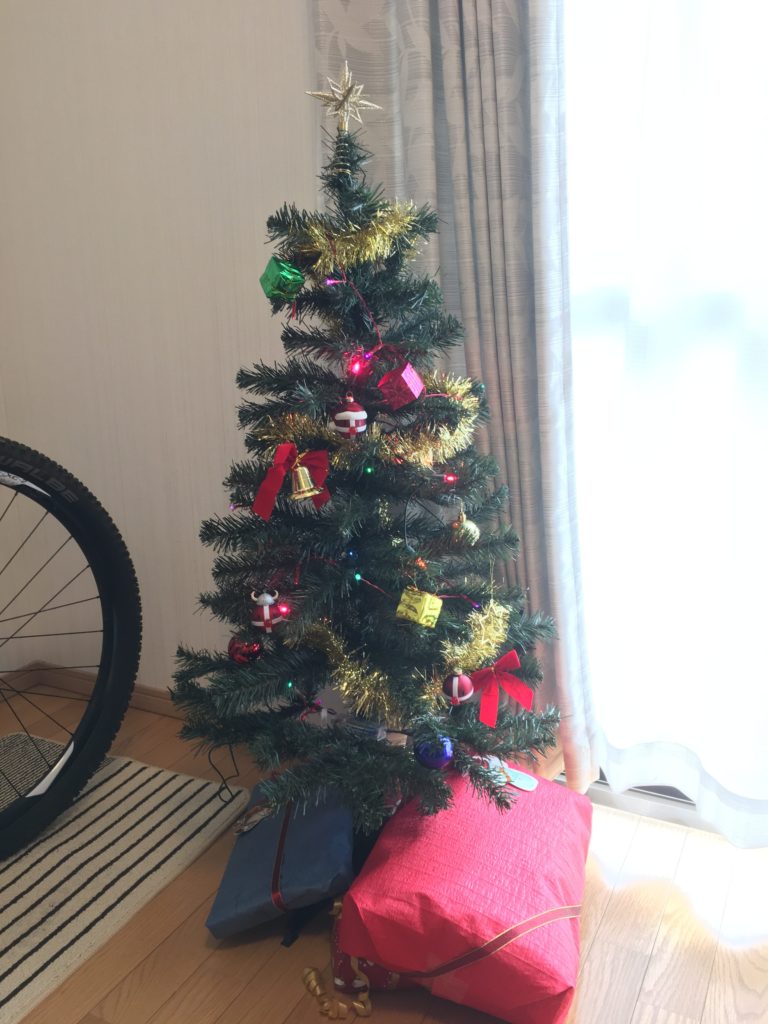 And putting the food on the table as well definitely gave the feeling of Christmas the final touch. 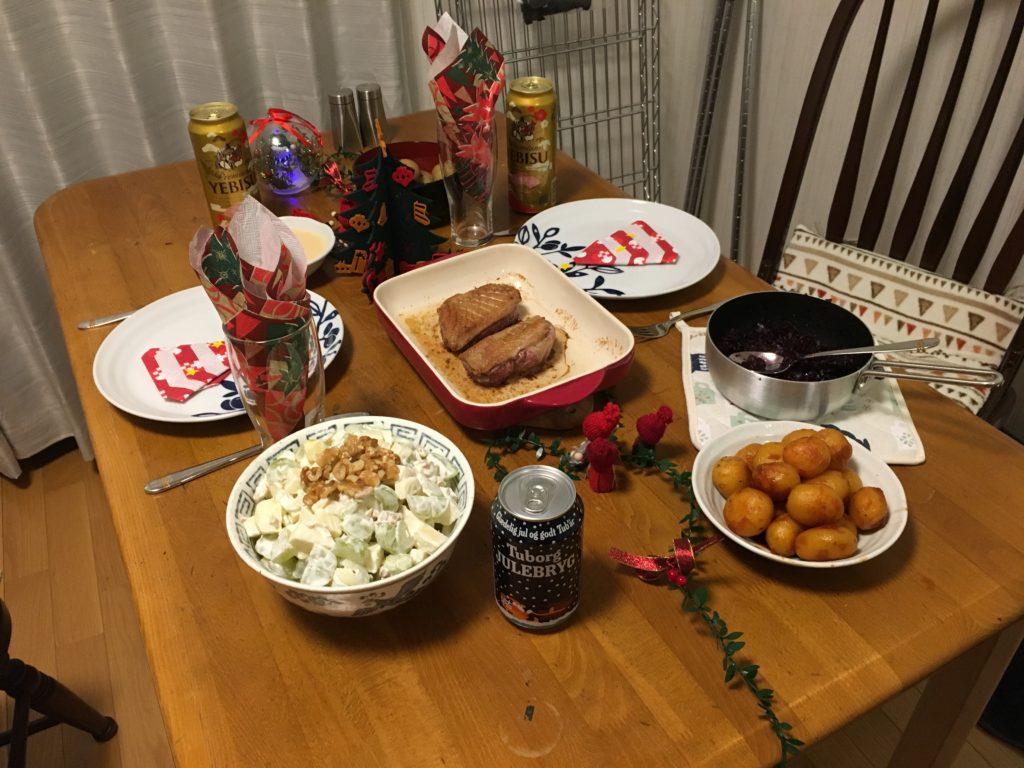 … and Christmas hats helped as well ^^ 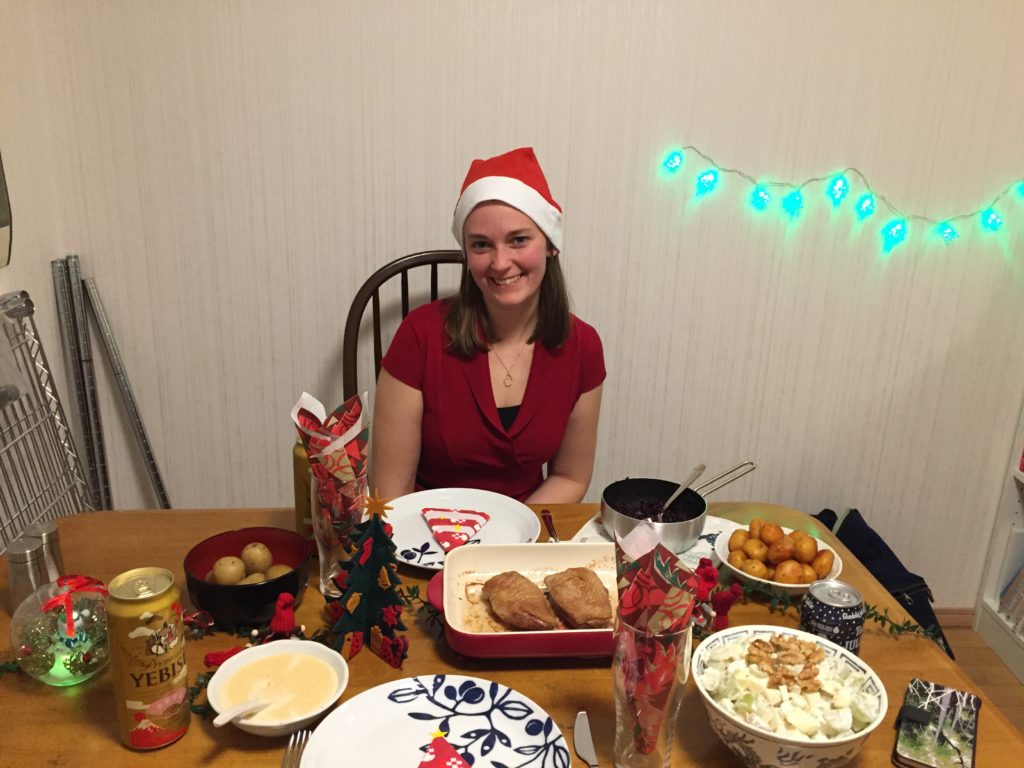 Sadly the duck meat didn’t taste so good, but the rest was a great success. Next time we visit Denmark, I’ll have to introduce Motoki to tasty duck meat ^^ The Risalamande desert was surprisingly good, and I found the almond (although there was no present except for the honor this time). 😛 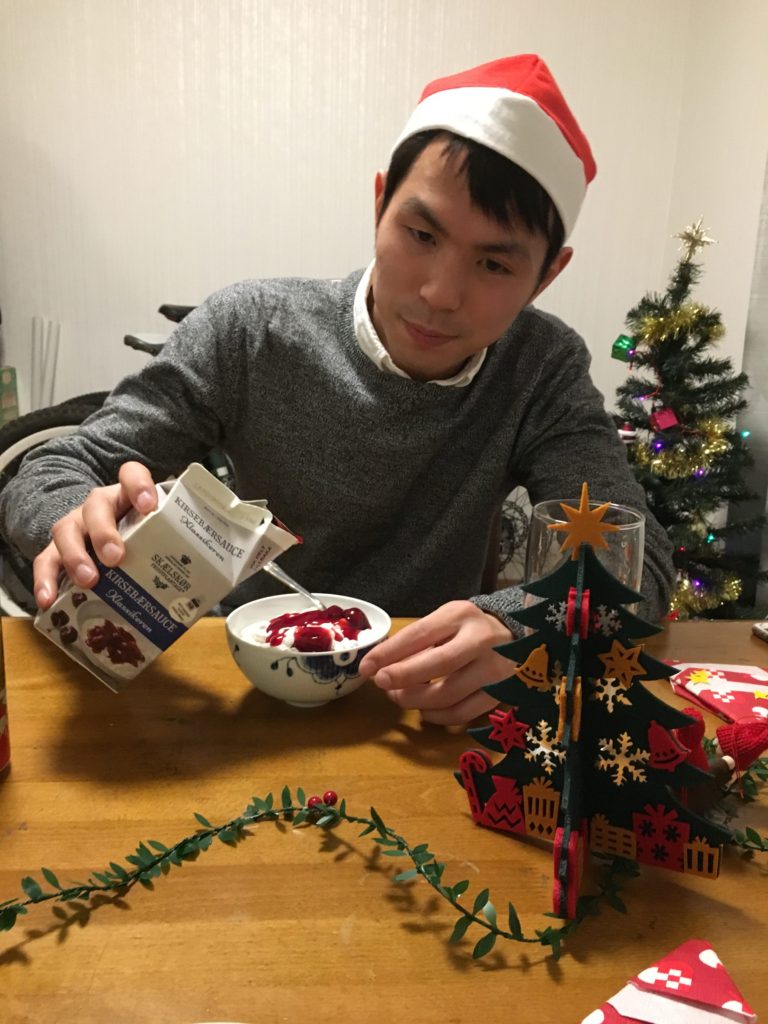 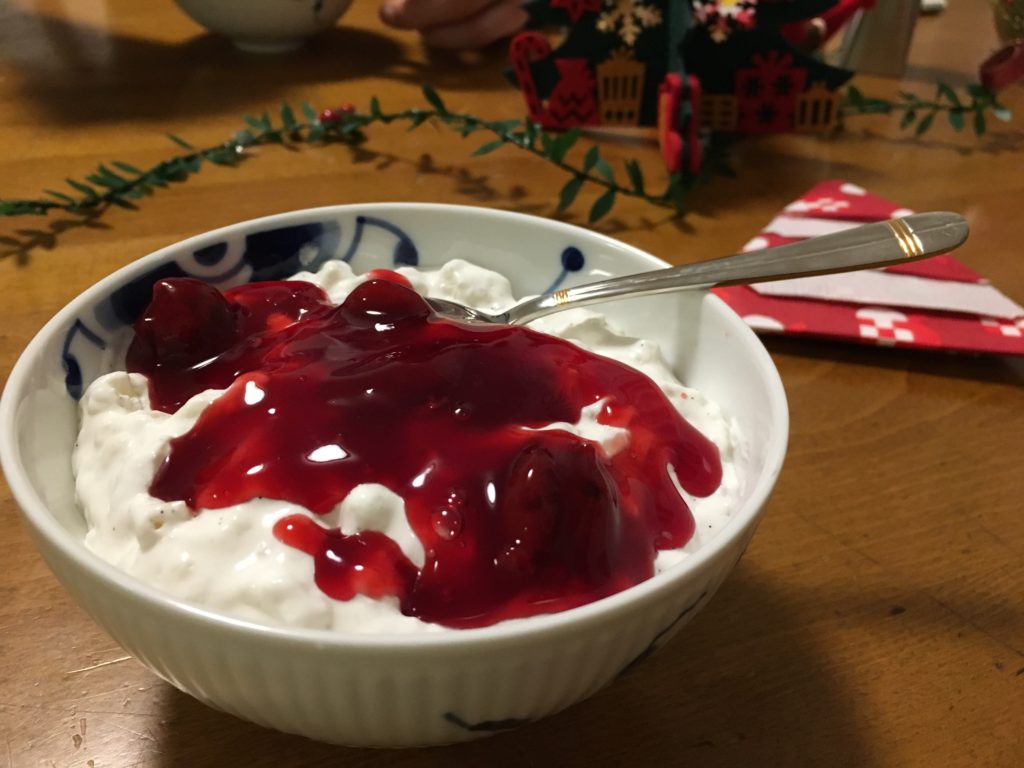 So although it will never be exactly the same as in Denmark, we had a nice Christmas eve in Japan. If we sometime will celebrate Christmas in Japan again, I think I will try to mix the Danish and the Japanese traditions a bit instead. For example, the Japanese eat chicken for Christmas and therefore it is easy to find tasty chicken meat in the supermarkets in this season. Furthermore, the Japanese eat strawberry cake sometimes with a small cute Santa on top or similar. If more than two people, it would be possible to serve both cake and Risalamande. I think that would be nice as well. The photo below show examples of some of the cakes sold in Japan. 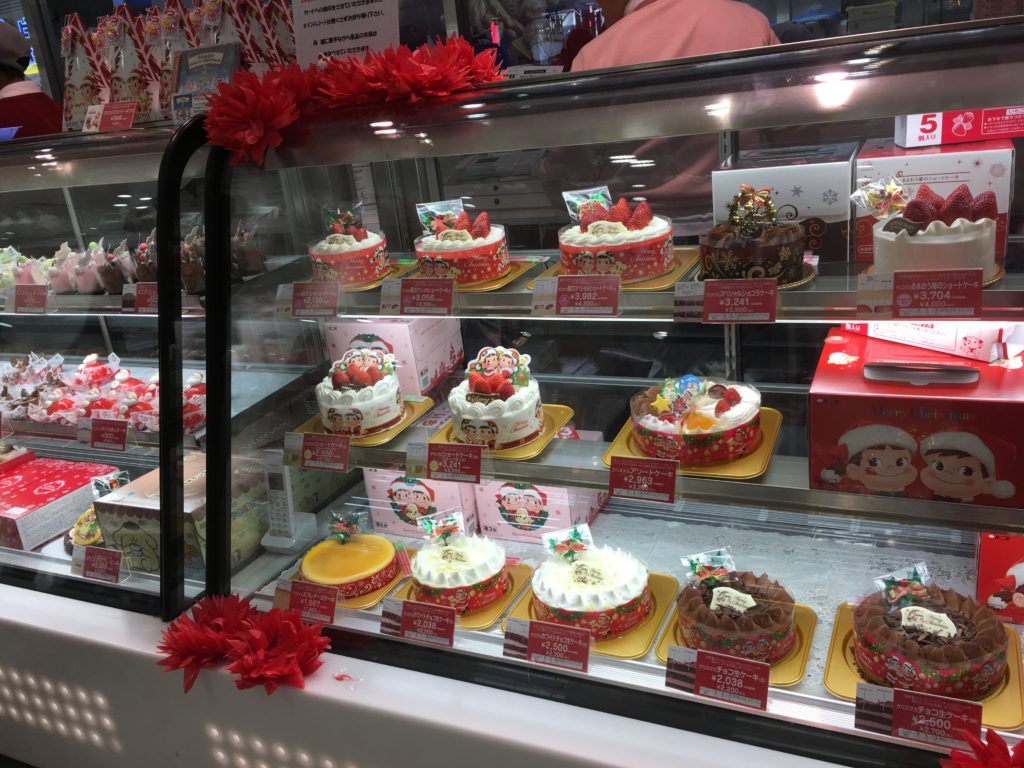 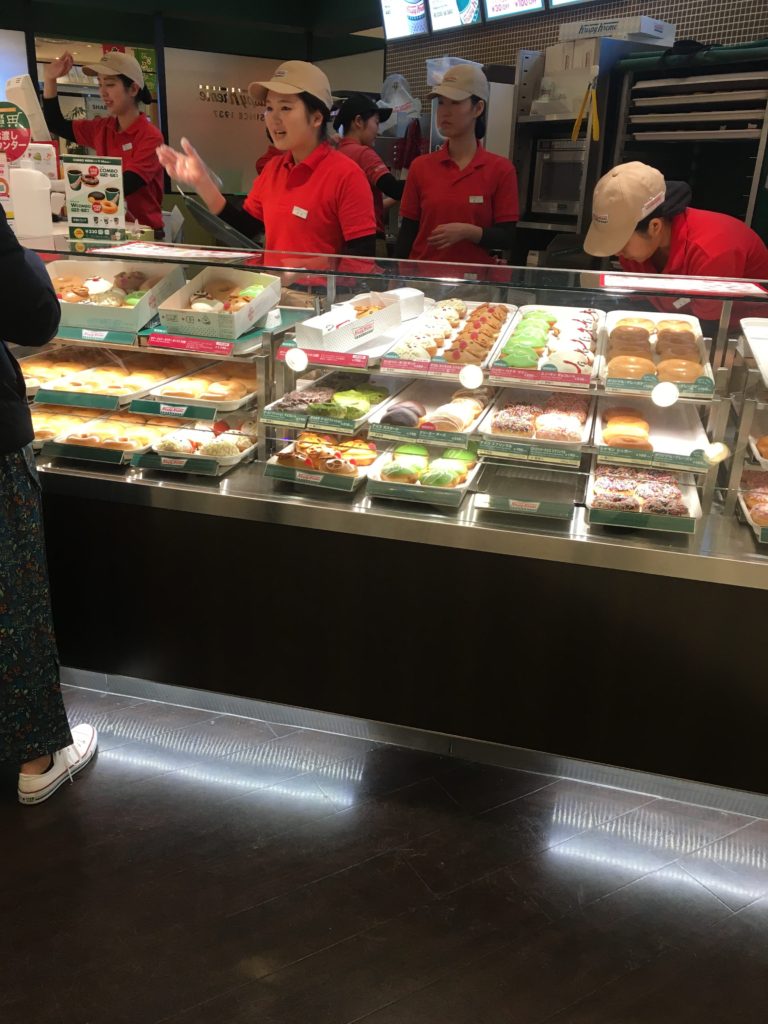 So with that, I will end this post. Next up will be about the Japanese new year!