Today I had decided that I would do some by-the-book sightseeing, but I ended up going back after only a few hours, as there were too many people, it was hot, and I was exhausted from the previous couple of days. However later, I found an awesome way to use some of all my coins, and the answer lies in a store called Tsutaya!

I started out the day by going to see the Meiji Shrine, which is one of the main tourist attractions in Tokyo – and for once, I felt that the number of foreigners was higher than the number of Japanese people. There were so many tourists! But the gardens and the shrine surely was a pretty sight, and I found the souvenir shop interesting to browse through (though I didn’t buy anything).

After walking around the shrine, I took a walk along the Takeshita street. 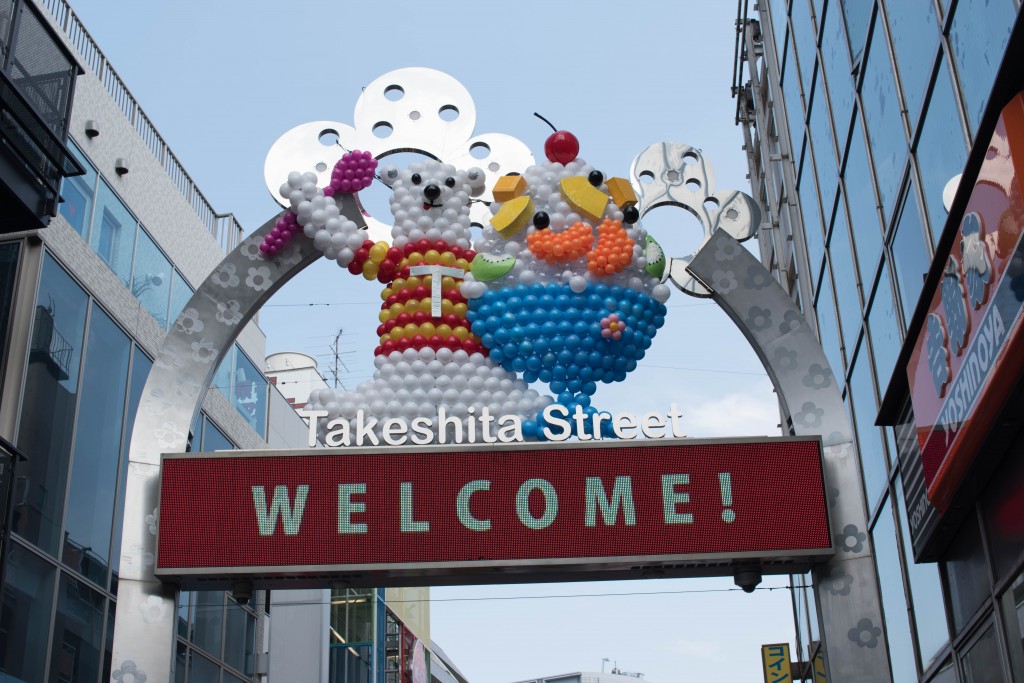 This drained my energy – there were SO many people (and it was hot as well). Check out the image below. 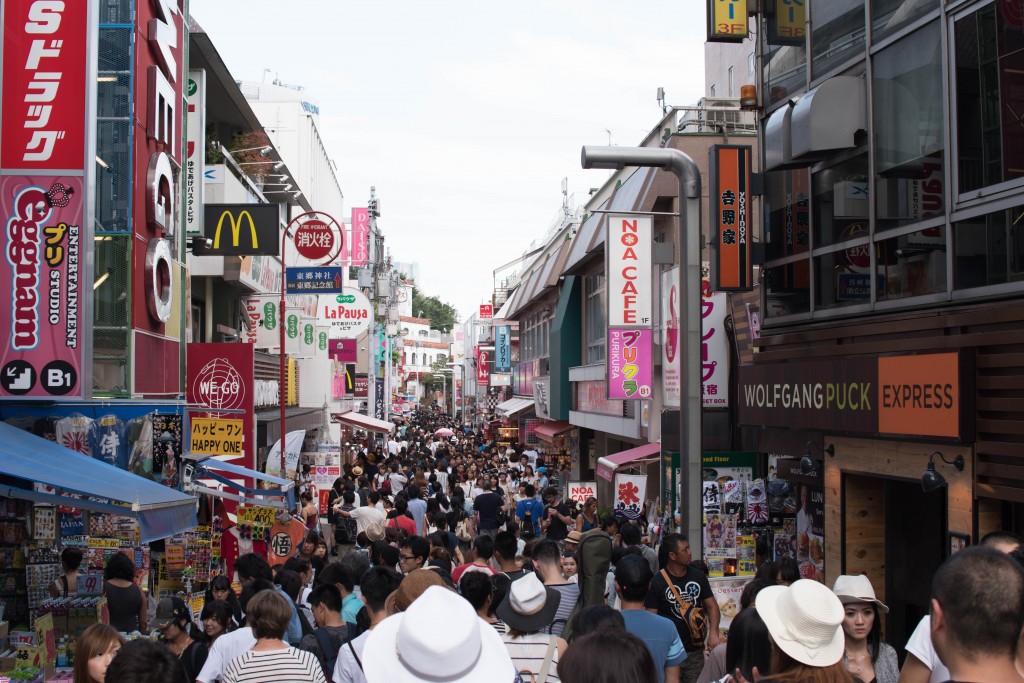 Every store along this street was filled to the brim with people, so I didn’t go inside any stores other than the large Daiso. I think I mentioned Daiso before, but it is a very cool store where everything is 100 yen (108 incl. tax) unless another price is stated. The image I got from all the other stores along this street was that they sold “cutesy-themed” items for example like pink accessories and clothes with bears. They might have had some awesome things inside, but I really couldn’t get myself to go inside those tiny stores with so many people. Maybe another time – I guess going on a Saturday might not have been the best time.

When I finally got out of the crowded street, I decided to walk to Shibuya. Even though there still were many people, the number of people on the streets here reminded me more of Shinjuku, so that was better. By this time, I had already decided to go back to my apartment, but I just wanted to briefly see Shibuya Crossings and maybe get a Coffee at Starbucks while looking at the huge intersection. However there was extremely crowded and no seats, so I ended up going back almost straight away. I didn’t even get a photo of the intersection, as I had to be somewhere up high to get a good shot – so all I got from there for now was a photo of some of one buildings (but I’ll come back again another time). 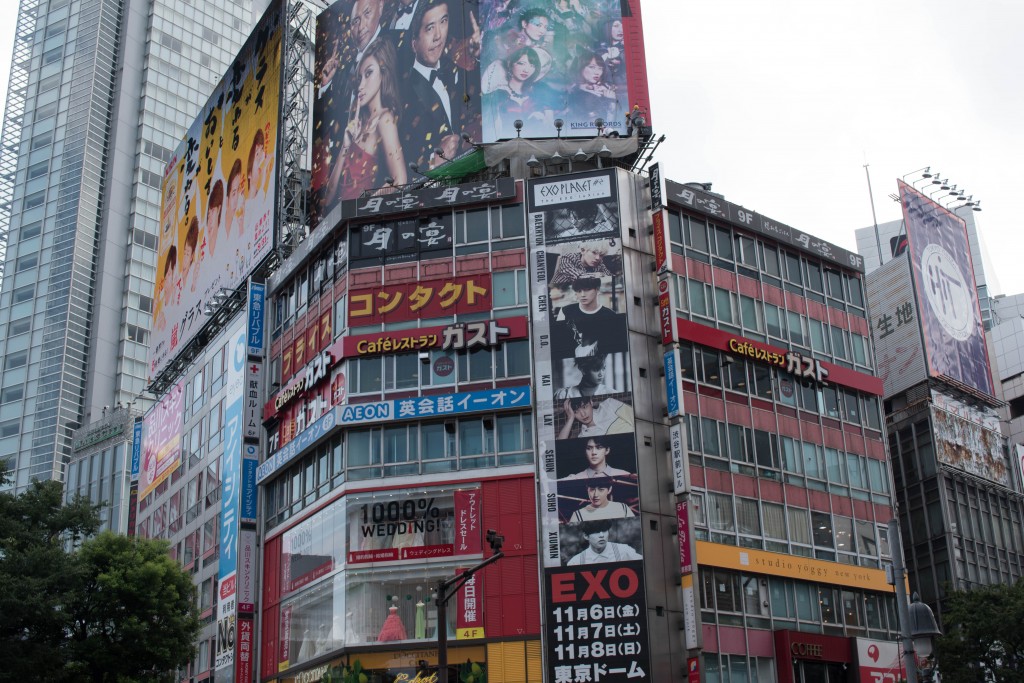 I think I have come to the point where sightseeing alone is not so much fun anymore, and today I actually just felt like relaxing with some anime, manga, or by studying Japanese. I am usually spending most of my time behind a desk, so all this fresh air is exhausting! ^^ And I haven’t been able to watch anime the way I do back home since the websites to stream anime aren’t available in Japan (they are blocked). And buying DVD’s really isn’t feasible in the long run – even a second hand DVD with 3 anime episodes (70 mins total) cost me around 100DKK.

So how do Japanese people watch anime for a reasonable price? One answer to that question is DVD rental. And not only can you rent DVDs, but also CDs and books including manga. I thought this was a perfect solution for me, but of course, I am not able to get any subtitles – not even Japanese. It’s okay, but some of the long dialogs with complex words are difficult to completely understand. However, it is definitely good practice, since I have to focus much more on listening. In addition, since it is not live TV, I can pause and look up words on the go.

So I went to Takadanobaba (close to where I live) to get a members card of Tsutaya, and to rent a few DVDs. They helped me filling out the application form, and went through everything in Japanese, but he was speaking very slowly and they had a sheet with some information in English he pointed at. I think they might have been able to speak a bit of English too if I hadn’t spoken Japanese to them first. I ended up returning with two DVDs and a member’s card – great success! Becoming a member and getting a card cost 324 yen – and renting the two DVDs for a full week was 388 yen. It would have been less if I had chosen a shorter period. 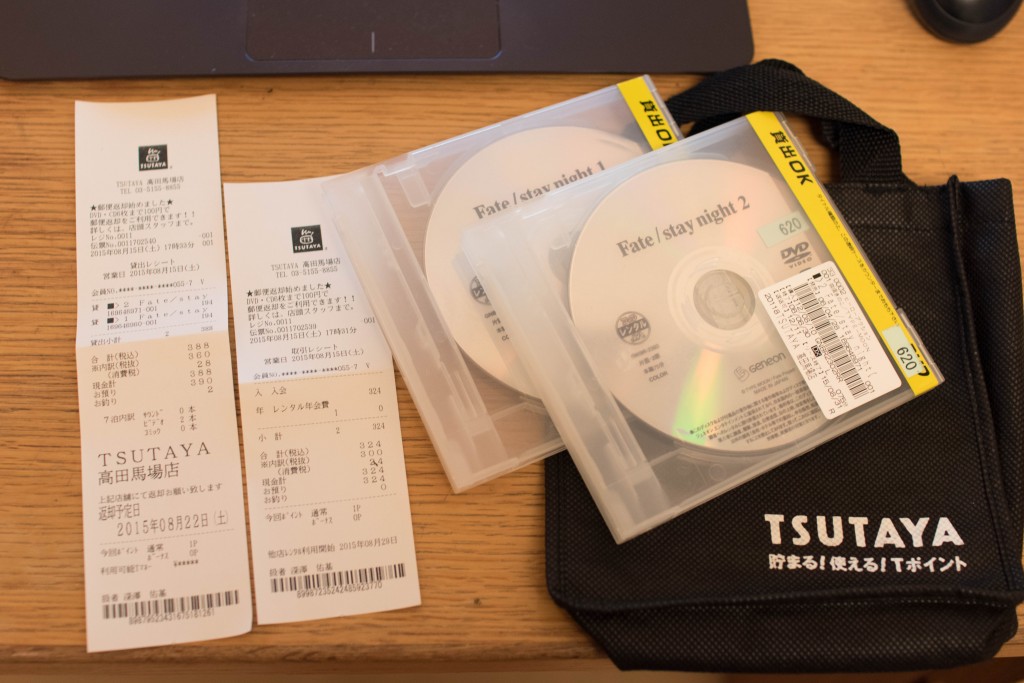 That was it for now! I don’t think I’ll go somewhere new tomorrow, but I might go back to Akihabara since apparently there are people cosplaying on the streets every Sunday. ^^