I finally got back from work today (had a skype meeting with my supervisor in Denmark, so left the office around 6:30PM. I bought some food on my way home, and so far there have been very few things here I couldn’t eat.. But for once, I managed to buy something in the convenience store which I had to give up on (not because I was full ^^). So now, I know that I am not a big fan of cold udon noodles (at least not this one).

Anyway, today I will tell about my first time experiencing an Onsen on the Nagano trip (I had gotten Nagano and Nagoya mixed up). I ended my last post around the time where we had finished temple sightseeing, and the next stop was an Onsen (Japanese hot spring). This place:

This was so nice!! We don’t really have anything like this in Denmark, so I’ll explain how it works (I was really glad I was there with people I could ask things – I was completely clueless).

When we entered the Onsen, there were shoe lockers right at the entrance. Most of the floor had a carpet except for right at the door, and you don’t step on the carpet with shoes on. So you take off your shoes, pick them up, and put them in a locker. Then there was a sort of vending machine on which you could choose what you wanted to do (buying tickets). It was around 650 yen for the entrance with no particular extra features (which is for example towels or other things). But I couldn’t read what it said on the buttons, so I don’t know exactly what it was that you could get. After handing over the ticket to the guy behind the counter, we could enter the Onsen.

Usually (also here) it is split into men and women, since you have to be naked – even in the pools. So there was a room with lockers where you undress, and then you enter the next room with no clothes on – maybe with a small towel (it might get wet though). Of course I didn’t take any pictures in there, but actually I found a picture on google maps of showing the shower area of the place we went to (left hand side area with small chairs), where you have to wash before going in the water. 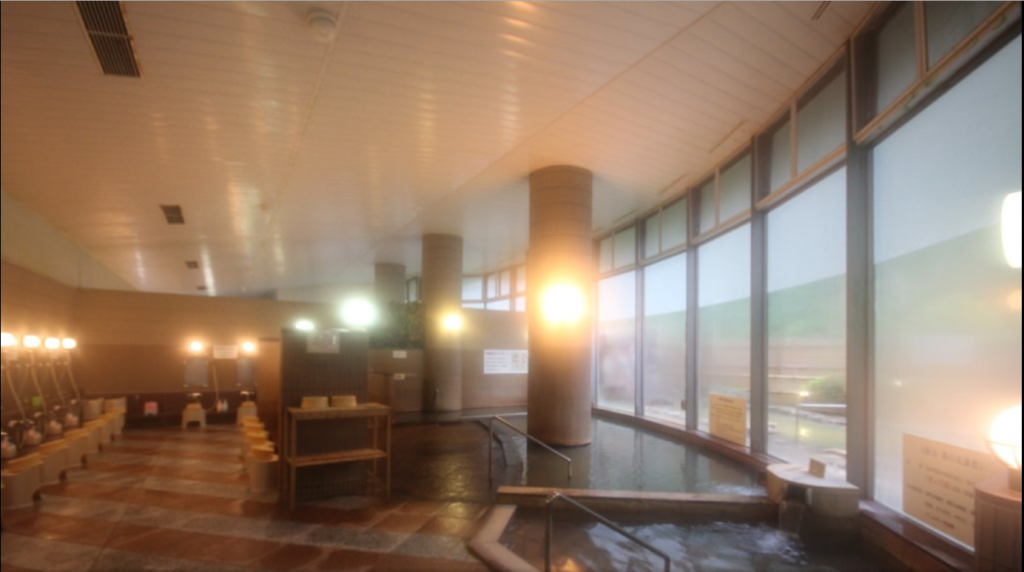 The water in the pools was very hot and the pools were very shallow, but it was soooo nice!! Apparently each of the pools should do various good things to you. One was would help against muscle pain, one was good for the skin, and there was even one where they said that it was going to help you losing weight (that’s some awesome water ^^). Everything was of course written in Japanese, so if it hadn’t been for the two Japanese girls I was with, I’d surely have missed out on a lot of things! There were bubble baths and an outside pool as well. Again, I found a picture on google maps that shows the outside view, however we were there in the evening so it was dark with cosy lighting. Outside was a very nice place to cool a bit down, since there was a bit of wind and it rained a little bit too.

I think we spent maybe 1-1½ hour in there just talking and relaxing, but in the end, I could really feel that I could not take any more of the heat. When we got out from there my face was completely red, and I think it stayed like that for a couple of hours!

When getting out in the lobby again, I also learned that it is tradition to drink milk after Onsen. They had various types of milk you could buy in vending machines, however the real traditional one was some particular one sold in the shop there. I went with a cold coffee instead, as I don’t like milk, but it had a bit of milk in it so…. close enough 😀

I think I will leave it at that for tonight, and then wrap up the Nagano trip next time I have time to write something. またね！